Reborn at the Crossroads

Beth Rivers has spent five years in an emotional cocoon from the death of her husband. One night she discovers an intruder on her land and shoots him. After bringing him back to her house, she realizes the wound has healed. Desire blossoms inside her for him. There’s something about him she can’t resist. However, Travis wasn’t the only thing that awoke that night. Something darker was released also and its eyes are set on Beth. They must either face this nightmarish creature or be consumed by it. 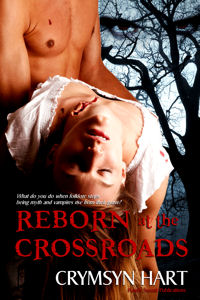 Reborn at the Crossroads

The shower curtain slid out of the way. She glanced up. Travis stood before her. Dried blood decorated his face and chest. His jeans were soaked with it and ruined. She couldn’t help the bolt of horror that pierced her heart. She scooted toward the back wall. A low growl spilled from his lips as he reached out to her. “I won’t hurt you, Beth.” “Is that what you told the four people you’ve killed? I heard it on the police scanner. Old habit from my husband.” She didn’t look at him.

Travis sighed. The curtain closed, but after a moment, it reopened again. Beth wondered if he was going to do it now. She glanced up. Travis stood naked before her. Heat raced through her body. She tried to deny her feelings for him, but she couldn’t. Something between them overrode the crippling fear. Her entire being wanted him. The water from the jets blasted around her and onto him, turning the water crimson. He knelt down again.

“I suppose you had some great epiphany after I left.”

He laughed. “I did actually. I remembered who I was. Elizabeth wouldn’t want me to behave this way. She would want me to forget all about that. I can’t help what I am. I don’t even know exactly what roused me from my slumber. I should be dead, bones and dust, but I’ve been given another chance with you. I have a hunger that must be satisfied. I’m trying to learn to balance that. In my life, I was a doctor. I tried to heal all those I—”

Beth heard his words, but placed a hand over his mouth to quiet him. His lips were too sensuous forming around the words. Her lips replaced her hand and she captured him. The water poured over the two of them and all she could think of was how his cock would feel plunging inside of her. At that moment, it didn’t matter what he had done. Her mind pushed it all aside and she focused on the primal link and raw heat.

He pulled away and worked down her throat. Each nip of his teeth, she let him take her deeper under his spell. His fingers scraped along her back. His fangs grazed her flesh. There was no use fighting the connection. Maybe on the inside, she truly was his wife reborn. She arched her neck, waiting for him to strike, but the pain never came. Instead, he cleared the water from her eyes and looked into them. His blue eyes smoldered with lust. There was no hunger. 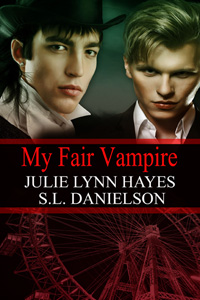