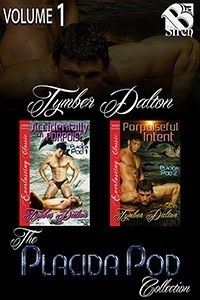 “Your dad bought us a house.”

Emery froze, releasing Sean after a moment. “He fucking didwhat?”

“He bought us a house on Manasota Key. It’s still under construction but it’s a damn gorgeous place.” He studied Emery’s dark scowl. “Oookay, why aren’t you happy happy happy about this? This is a good thing. He even took me out to lunch after he showed me.”

Emery collapsed into one of the loungers and stared at the pool.

“Dude, you’re starting to worry me. What’s wrong with him buying us a house?”

“I love my father, but I don’t want to be beholden to him for anything. I pay my own way, and I pay for my mate.”

“I didn’t mean it like that.” He finally refocused his grey gaze on Sean. “I meant I don’t want him buying us big-ticket stuff like that.”

“Technically, he didn’t. The pod did. He said it’s a slush fund an earlier Alpha set up. So consider it a perk of the rank, or a business expense.”

Emery threw his head back and closed his eyes. “I should have guessed,” he mumbled.

“I still don’t see why principle has to trump free house, here. If I’m happy about it, why can’t you be? It was really kind of sweet the way he took me out there, to be honest. He was so proud of himself for getting it for us.” He flipped the steaks.

“And accepting a free house conflicts with that…how?”

“Remember how you got pissed at me when you said I was treating you more like a girl than an equal partner?”

Sean thought about it. “Okay, yeah, so? Still not tracking.”

Emery swung his legs around and sat up. “It’s kind of like that. I want my dad to treat me as an adult. An equal. I don’t want to feel like he’s taking care of me, or that I’m beholden to him.”

“It’s a freaking house. That’s a damned expensive watch or a hella lot of booze, Sean.”

Sean poked at the steaks. “So we’re not going to take it?” He struggled against the disappointment threatening to ruin their evening. He’d really come to love the idea of living on the key again, even if it would be a guaranteed way of his mom dropping in unannounced all the time. He’d grown up there, and once he moved away from home, it was finances—or a lack thereof—and a desire for privacy that kept him off the key.

He couldn’t look at Emery. Now he really did feel all kinds of girlie emotional.

He wanted the house, dammit.

He shrugged. “If you don’t want to, we won’t.” He poked the steaks again, a little harder this time.

Emery got up. He walked over to him and slipped his arms around his waist from behind. Resting his chin on Sean’s shoulder, he softly asked, “You really liked it, huh? Be honest, please.”

“At the risk of sounding exactly the way I said I didn’t want to be treated, yeah. It’s a fucking nice house. Or will be, once it’s finished. We get to pick the interior details. It’d be our house.”

“This is our house.”

“No, it’s not. We rent it. We can’t really make it ours. Yeah, it’s our home. We live here. Being together is what makes it our home. But…” He shrugged and poked the steaks again.

Sean reached back and smacked Emery in the thigh with the barbecue fork, not caring if it got his slacks dirty. “No, not if you feel like that.”

“Okay, for starters, fucking ow.” He spun Sean around and relieved him of the barbecue fork. “Secondly, my problem with taking something from my dad shouldn’t make you suffer. I’ll get over it. We’ll take the house. You’re right, it’ll be nice being able to pick stuff out together.” He examined his slacks. “Third, you better hope that comes out. These are my favorite khakis.”

He palmed Emery’s crotch, glad to feel his lover’s cock harden under his hand. “I know something else that can come out.”

Emery grabbed a handful of the front of Sean’s shirt and pulled him close, kissing him. “After dinner. You burn my steak, and I’ll forget you’re a guy and spank you like a redheaded stepchild.”

“Then maybe I won’t spank you.”

Sean took the fork back and stuck his tongue out at him. “Fucking sadist.”

Emery goosed him and turned to head back into the house to go change clothes. “You’re one to talk, babe. Takes one to know one.”

Emery stood, dropped his shorts, and carried his beer over to the pool steps, where he walked in. Sean watched as his mate’s muscles rippled under his tan skin. Emery was a mighty fine hunk of manflesh, supernatural or otherwise.

And he was all Sean’s.

“Damn, this water feels good.” He joined Sean by the wall. “I really appreciate you being so patient with everything going on. I know it’s a disruption.”

“Yeah, but you didn’t have to sign on for this.” He leaned in and kissed Sean, slowly, sweetly. “If you’d told me to choose between you or the pod, I would have chosen you without hesitation.”

“They’re your family. I’m not making you do that.”

He palmed Sean’s cheek. “That’s one of the many reasons why I love you.” He leaned in for another kiss, setting his beer up on the side to free his hands. Before long, Sean had his arms and legs wrapped around Emery, both their cocks hard and rubbing against each other in the water.

“Want to go to bed?” Emery asked, his tone breathless.

“No, I want you to put that cock in my ass right here, buddy.”

He grinned. “Go get the lube.”

Sean swam for the side and pulled himself out. He grabbed the tube of lube from the towel cabinet on the lanai and then cannonballed back into the deep end. He broke the surface in front of a laughing Emery and held up the tube.

“I think we need to get to the shallow end first,” Emery suggested.

They moved. Sean handed the lube to Emery and turned, bracing himself against the steps, ass out of the water. Emery slicked his cock first. Then Sean let out a moan when he felt Emery’s talented fingers, first one, then two, seductively lubing his ass.

He flexed his hips, trying to fight back the urge to hump himself onto Emery’s hand. “Hurry up,” he said. “I want your cock inside me.”

“Hold on.” His fingers withdrew, Sean moaning a little at the sudden emptiness. He heard Emery put the tube of lube on the edge of the pool before he grabbed him and spun Sean around to face him. “Now.”

Sean draped himself around Emery again, like a koala on a eucalyptus tree, dropping his head onto Emery’s shoulder as his lover worked his cock inside him.

Once he was fully seated inside Sean, Emery moved them into deeper water, until only their heads were exposed. He kissed Sean as he slowly fucked him, one hand wrapped around Sean’s cock and stroking it in time with his thrusts.

He wished he could spend his whole life making love to Emery. Pesky things like working to pay bills got in the way of that fantasy, however.

So he’d settle for the good times, the sexy fun like now, alone and fucking in their pool.

Emery knew when to squeeze, when to stroke, feeling almost as good as when Sean fucked his ass or mouth. “You like that?” Emery asked.

“Look at me, baby. I want to watch your face when you come.”

Sean forced his eyes open and looked into Emery’s grey eyes. It felt like a high-voltage circuit connected their souls.

“Oh, I’m going to do that, all right.” His fingers tightened around Sean’s cock as they rocked together in the water, Emery’s thick meat pounding into his tight channel, perfectly hitting Sean’s gland with every stroke at this angle.

Desperate need took over Sean. He wanted, needed to feel Emery’s cock explode inside him. Rocking in time with Emery’s thrusts, he fucked himself between his lover’s hand and his cock.