Ever since Olivia Hughes’ husband demanded a divorce, her father, Judge Hardison Black, disowned her. She now lives above the laundry shop and supports herself. Despite the disapproving looks from the townsfolk, a new start is what Livie desperately needs.

Thomas Langston is an outlaw, wanted for a murder he didn’t commit. He’s convinced Judge Black took a bribe to send him to the gallows and he won’t rest until he learns the truth. He kidnaps Livie to force the judge’s hand, unaware her father could care less. Now Thomas is on the run with a woman and no idea how to clear his name.

Livie is Thomas’s one hope for redemption. Before long, their mutual attraction flares into an all-consuming passion. But when Thomas gets caught, he’s at the end of his rope. Can Livie set the record straight before he swings at the end of a hangman’s noose? 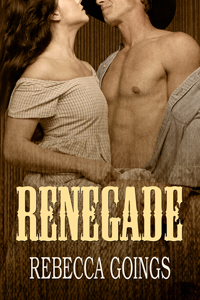 “Thinking about kissing you.”

She forgot to breathe. In that one moment, the entire world disappeared and nothing else existed but him.

He nodded. “Probably more than you know.” His arm held her firm against him. There was no escaping his grasp.

Her eyes roved to his mouth of their own accord.

Livie wondered at the relief in his voice a split second before he lowered his dark head. His lips were soft but firm, demanding nothing. Again and again he kissed her, teasing her mouth with gentle pecks.

The contact sent her reeling. It was a good thing he held her or no doubt she’d crumple to the dirt. She didn’t know if she did it right, but she kissed him back in kind, unsure of what to do with her hands.

After a few blissful moments, the pressure of his mouth increased and his hand found its way behind her head. The slide of his fingers in her braided hair had her gasping, breathing in the unique essence of him. His lips tugged hers until she felt the wet swipe of his tongue.

Livie broke the kiss and stepped away in shock. She raised her hand to her lips and turned to gaze at him in wonder.

With one step, he caught her, and placed both hands on either side of her face. Her heart fluttered wildly and every one of her senses focused on him. Her corset chaffed her skin while her blood pounded in her ears. Her eyes only saw Thomas before her hands itched to touch him.

His command was uttered with such sensual force, she was powerless to resist.

Once she’d obeyed, he swooped in and kissed her again with fervent abandon. This time he wasn’t gentle. His tongue plunged deep, bringing forth a cry of surprise from within her. The taste of him overwhelmed her, so hot, so foreign, she had no hope of resisting his onslaught.

His teeth tugged at her bottom lip before he suckled it, groaning himself.

Livie finally understood what he’d meant by not knowing what she’d been missing. Having Thomas pressed against her, demanding her participation, brought her body to life. Her nipples hardened and she found herself wishing she could wrap herself around him.

Her hands pressed against his chest. Livie clutched his shirt in her fists, but she was too embarrassed to do much more. He seemed to sense her hesitation and pulled away, but just barely.

Before she could answer, his mouth was on hers again. This time, she answered his tongue with her own, getting bolder. Her hands curled around his neck and into his hair. He hadn’t worn his hat this morning. Nothing hindered her.

Still she wasn’t close enough. Livie stood on her toes in an effort to become one with him.

A strange longing filled her. Desire pulsed between her legs and for the first time in her life, she wished to be with a man. Her husband had always rutted with her in the dark of night, but she’d never enjoyed it. However, if Thomas had been on top of her, filling her, without a doubt she would have loved every minute.