When Brian Thornton is taken by surprise at gunpoint, while in the bed of a beautiful, wealthy woman, he swears his revenge. But when he learns his humiliation was at the hands of a young woman and a boy, his vengeance knows no bounds.

Joanna Simmons finds herself snatched out of her home and taken to Thornton's ship. Against her will, she travels to Texas, and then by wagon train to Bastrop, Brian's hometown. Joanna finds acceptance and genuine friendship with the people of the town, down to Brian's sister, but the emotional war that wages between Brian and Joanna, keeps any kind of happiness at bay.

Revenge, the Cowboy Way, is the story of hate, love and revenge. The question is whose revenge is it? 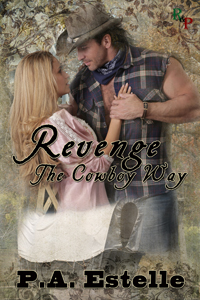 The balcony door was open and the full moon cast shadows everywhere. The curtains hung dead still. There wasn’t the slightest breeze to help ease the heat and humidity of the room. He felt stifled. He felt bored and antsy, and he wanted to be home.
For the first time in a long while, he had missed spring round-up. He silently thanked God that this would be his last trip. He had hated leaving his sister home alone, even though she was well-protected. The uprisings were happening more and more.
“You haven’t heard one thing I’ve been telling you!”
The demanding voice immediately brought Brian Thornton back to the present. He turned to look at the black-haired beauty lying next to him. There was a time when she had made his trips to New York bearable. Now she was as cloying as a cheap perfume.
“We’re invited over to the Stonewell’s tomorrow night. You’ll need to pick me up around nine o’clock. We don’t want to get there too early.”
“I’m afraid not.” Brian interrupted. “I’m leaving for home in a few days. I won’t have time for any socializing. I suppose this is as good a time as any to tell you I won’t be coming back to New York. I’m selling the ship when I get home.”
“No!” Brenda whispered. “You can’t treat me like this. What about us? What about our love?”
“Our love?” Brian sneered. “The only person you love is yourself. My side of the bed won’t even be cold before someone else is enjoying your talents.”
Brian was getting out of the bed when she grabbed his arm, bursting into a torrent of tears. “It’s not true. I’m always faithful when you’re gone!”
Twisting away from her clinging hands, he snarled. “Oh, for God’s sake, Brenda, spare me the theatrics. I have many acquaintances here, and I can’t count the number of times your name comes up, or how often your arm is linked to the gentleman with the fullest bank account.” A disgusted grunt escaped his lips as he reached for his pants. “Fortunately, it doesn’t bother me since I only look you up for one reason, and we both know what that is.”
Brenda’s pleas for him to stay were cut off by a voice coming from the balcony. “How ungentlemanly to upset the lady so.”
After the initial shock of hearing someone else in the room, Brenda dove back under the covers while Brian went for his gun. He stopped mid-stride, hearing the click of the hammer being pulled back. Standing naked, Brian stared down the barrel of the intruder’s gun.
“What the hell do you want?” Brian growled.
“Actually, I’ve got everything I want, thanks to your servants, Mrs. Marshall. They were most accommodating.” The man was small in stature and build, but the gun, pointing at his chest, kept Brian at bay. His piercing blue eyes never left Brian’s face. He moved with care to Brian’s discarded clothing and found the gun beneath the pants. “I know it was foolhardy, but I let my curiosity get the better of me. I had to see who Mrs. Marshall’s guest was tonight.”
“You son of a bitch,” Brian grated through clenched teeth.
With a hint of a smile, the thief gave a mock bow and said, “Until we meet again.” Then he was gone.
Brian was at the window in an instant, only to see two men riding off into the night, their laughter echoing in his ears.

Brian was dressed and on his horse within minutes of the thieves’ departure. It would be a waste of time to try and track them at night, plus the son of a bitch had taken his pistol.
Brenda had pleaded with him not to go back to his hotel in case the robbers came back to finish her off. When tears failed to keep him there, the names and curses she screamed at his retreating back would have made a seasoned prostitute blush. After a sleepless night, Brian was still fuming over the previous night’s events. His mind drifted back to the robber. Had it been his imagination, or had the man paled at the sight of Brian’s nudity? And there was something about him that Brian couldn’t put his finger on. His voice had a low raspy sound to it. Had he heard that voice somewhere before? It mattered little. He would find the bastard.
His thoughts scattered when he was slapped on the back.
“Damn, it’s been a long time!”
“Tony.” He laughed, jumping up to grasp his old friend’s hand.
They had been friends since grade school, when they both lived in Texas. Tony had wanted no part of a cowboy’s life, and when he was old enough, he headed to New York, where he planned on making a fortune using his hands playing cards, not throwing lassos. When the professional gambling didn’t pan out, he went to work at a shipping yard and eventually bought his own import-export business. Tony handled everything Brian shipped in and was a business associate that Brian held in high esteem.
They talked business over breakfast, and when Brian told Tony about the robbery, his friend laughed so hard, tears gathered in his eyes.
“What the hell is so damned funny?” Brian growled.
“Hey, I’m sorry,” Tony answered, trying to compose himself. “It’s just Brian Thornton, of all people, getting caught with his pants down.”

Brian returned to Brenda’s house to see if he could pick up the tracks. He came up empty handed as they ended at the edge of a stream, and he couldn’t find another trace of them. He was following the stream back to town when a horse and rider caught his eye. Now here was a horseman. The horse and rider moved as one racing across the meadow. As they neared, he saw long, white-blond hair flying loose as the rider urged the horse on. This was a woman! What was a woman doing riding all alone?
She didn’t see Brian as she brought her horse to a thundering halt, jumping off before the horse came to a stop. He could hear the peal of her laughter as she rubbed her horse’s nose and walked to the stream, allowing him a welcome drink.
The woman was cupping her hands in the water when Brian sauntered up on his horse. Letting the water trickle out of her hands, she shielded her eyes from the sun to see who this visitor was. The glare was still making it impossible for her to make out who it was. She threw him a dazzling smile and greeted him with a friendly, “Good morning.”
Her beauty was stunning. He felt a tinge of lust as his gaze traveled upward over her body. Their eyes met. That was what he couldn’t put his finger on after the robbery. The light of the moon was enough to see the distinct color of the thief’s eyes. They were the color of turquoise, and he was looking into those same eyes right now! His thoughts were filled with the implications of his discovery as he dismounted and stepped out of the glare of the sun.
The color drained from her face and her smile faded.
“Why, ma’am,” he drawled. “You’re as white as a sheet. Anything wrong?” His mocking tone was unmistakable.
“No… I… that is…” she stuttered, backing away from him.
“Have we met before? You do look mighty familiar.”
“No, no!” she said so quickly the words blended into one, overloud denial. “I’ve never seen you before in my life.” Without warning, she jumped on her startled horse and raced away as though the devil himself were after her. Little did she know, he was! “Son of a bitch,” he muttered, laughter pulling at the corners of his mouth. A girl. A slip of a girl. His smile died as he climbed back on his horse.
The shipping yards were always a place of hustle and bustle. He walked into Tony’s office and plopped down on a chair, putting his boots up on the desk. Tony leaned back in his chair and put his cigar out.
“Twice in one day. To what do I owe this honor?”
“I went out to look for some tracks of the two that robbed me last night. I happened to see a woman riding.” Brian tipped his cowboy hat back further onto his head. “A very attractive woman. Long blonde hair, blue eyes.”
“You must be talking about Joanna Simmons,” Tony said, getting out of his chair and pouring two glasses full of amber-colored liquid. He handed one to his friend and sat on the edge of the desk. “She’s a beauty, isn’t she? I can’t believe you saw her. She keeps close to home.”
“I just saw her riding, and she was alone.” Brian explained, taking a drink. “Don’t most women ride with a chaperone or companion—or maybe a husband?”
“Last I heard, no husband.” Tony winked. “And sure, most women do, but from what I hear, Joanna Simmons is hardly like most women.”
“Now what the hell does that mean?”
“It means she’s been living alone for the last six months or so. She did live with her grandfather. If I recall, he died a while back. Her parents were killed in some accident years ago.”
“Nobody bothers her out there all by herself?” Brian asked.
“To hear tell it, she has neighbors who keep a real careful eye on her. So, my friend, if you’re thinking about sniffing around, you’d best take care. She’s well-guarded.”
Brian downed the rest of the whiskey and got to his feet. “Furthest thing from my mind.” Brian lied.