At fourteen, Taylor Ashby had a schoolgirl crush on Rhett. Who could ignore the hotter than hell senior quarterback of the football team? But he left for college before she had her chance and went on to be the hottest quarterback in the NFL, a world away from little Dixon, Texas.

Ten years later, Rhett Banes comes home after a very public divorce that caused his world to come crashing down. Coming home, he hopes he can remember the man he was before all the glitz and the money screwed with his head.

When Rhett comes across his best friend's little sister all grown up, he can barely keep his hands to himself. But Taylor isn't the same little girl who had an infatuation. She's all woman and might be too much for him to handle—especially when a woman is what got him into trouble in the first place.

She looked across the cab, but his face was too in shadow to see the emotion she felt in waves rolling toward her. “Let’s just say that all the people who were supposed to be my friends and my support ended up only wantin’ one thing—my bank account. I had mentors with the team who tried to tell me, but I didn’t listen. I got a rude awakenin’, though, and now it’s time to get back to basics.”

Back to basics. Maybe he was really coming back to Dixon. Taylor had an odd sense she might know where he was taking her. When he turned onto the lane to the Lutz farmstead, her instincts proved right. The dusty lane kicked up a bunch of dry dirt as he muscled his way down the lane, the big truck eating up the path. She was quiet, wondering if he would indeed be her neighbor. To have all that man living next door, she wouldn’t be able to get anything done or concentrate on school.

Oh, but to know he was just on the other side of the woods, sleeping in a big, nice warm bed all alone. That would give her fantasies galore to ease her fevered dreams.

Or maybe she needed to be the bad girl inside, the one she tried to hide, and taste a little bit of her fantasy before she left for good. How many women got a second chance with their old crushes? It had been a good, long while since she’d had a fun night of hot sex and twisted sheets.

She looked across the cab and saw his large, muscled arms. She could definitely do much worse.

Rhett pulled his truck in front of the old farmstead. He twisted in his seat and looked over at her. “I bought this old place this morning.”

He chuckled. “I forget how quickly news travels in a small town.”

“I didn’t hear you’d actually bought it. After sittin’ empty for four years, I’m sure it’s gonna need some work. Old Mr. Lutz wasn’t doing too well before he passed, either, so it’s probably been longer than that since it’s seen a lovin’ hand.” Taylor slid forward in the seat a little and looked up at the big, old house. She’d always thought it was the prettiest one in Dixon County and would’ve given her eyeteeth to see inside. Too bad she’d pissed off Mr. Lutz too much as a child to ever get an invite. “It’s so beautiful. Can we go inside and take a peek?”

“Sure. I was able to get the electric turned on this afternoon, so it shouldn’t be too cold in there. I wasn’t expecting a guest tonight, so I didn’t turn it up very much.” Rhett reached behind the seat into the backseat and grabbed something. He dropped his athletic bag between them and opened the zipper. “I probably have somethin’ in here to help keep you warm. They’re clean, I promise.” After digging around a moment, he tossed her a pair of sweatpants and a jersey.

Taylor had thought he’d brought her out here to get into her pants and instead, she was getting into his. Sort of. She shucked off her coat and slipped his too-big stuff on before pulling her coat back on. After rolling up the ends about a dozen times and pulling the cord at the waist as tight as it would go, she was done. “Ready,” she cried.

“You’re awful excited to see in there.”

“I’ve wanted to see in this house since I was little, but I got caught in the pond and his orchard too often for him to ever let me.”

Taylor froze, a little mock anger filling her. “Before old man Lutz died, they had hundreds of apples rotting on the ground. So yeah, I liberated a few here and there. Who do you think cleared up the orchard the past four years? You can’t leave mountains of rotting fruit on the trees and the ground and expect those trees to keep producin’.”

Rhett lifted his palms. “You can liberate all you want, okay? I promise.”

Taylor grinned at that answer. “Now, that’s what I like to hear from a new neighbor.”

After Rhett grinned at her, he opened his door and got out. She pushed hers open and twisted in the seat. Before she could jump down, he was there, his hands gripping her waist.

“Don’t you know how to wait for a man to open your car door?”

“Haven’t had one opened for me in so long I didn’t know I was supposed to wait,” Taylor countered.

“Next time,” he said as he drew her down from the seat to slide along his firm body, “you let me come open your door so I can help you get out. It’s the gentlemanly thing to do.”

A thrill rippled through her. She wasn’t sure if it was because of the close contact or that he was already talking about a next time. She nodded. “So, you’re a gentleman, are you?”

He drew her closer and looked down into her face. “I’m trying real hard to be.”

Taylor wasn’t exactly sure what he meant by that, but she did like the feel of him surrounding her body. Thoughts of fighting him escaped her mind and she melted into his heat, her mind made up. She wasn’t letting this opportunity slip through her fingers. She’d have a taste of Rhett Banes before one of them disappeared again. 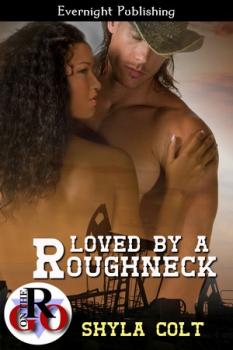 His Woman (MF)
Sam Crescent
In Shelf
$3.99
Tweets by
sirenbookstrand