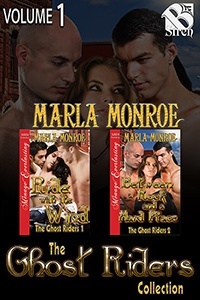 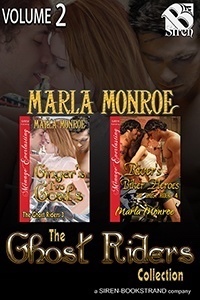 Cassius hated riding into the sun. Especially when it was as low in the sky as it was now. It blinded him even with the tinted visor on his helmet. Most days he didn’t bother with a full helmet, but when he was out on the open road, he preferred the full face deal. He’d take red meat over bug meat any day.

“Fuck this shit. I’d just about rather pull over and wait for the fucking sun to set then ride like this,” Merrick, his brother, said over the mic in his helmet.

“I’m all for that. Want to pull over at that copse of scrub ahead?” he asked.

“Hell, yeah. Could use a drink anyway.”

Cassius slowed the big bike down and started pulling off the road as soon as he reached the scrub then cursed and jerked the bike back up on the road, nearly turning the thing over.

“What the fuck?” Merrick yelled in his ear over the mic. “You trying to kill me?”

“There’s someone on the side of the road, man. I nearly ran over their legs.” He walked the bike up a short ways before shutting off the engine and setting stand.

He could hear Merrick cursing even after he’d pulled off his helmet. Cassius threw one leg over the bike and groaned as his legs and ass stretched in a new direction. He walked toward the figure on the ground, making it there at the same time as his brother.

“Fucking hell, is she dead?” Merrick asked before crouching down.

Cassius grunted before kneeling next to woman’s upper torso to get a better look. Her skin had a tight look to it with enough pink showing through the dirt, dust and bruising to attest that she’d been out in the sun a good bit before she’d collapsed. Her dry, cracked lips were caked with blood and peeling skin.

“Damn, if she’s alive, it won’t be for much longer,” Merrick said.

Cassius pulled off his leather gloves and checked for a pulse, noting that her skin was hot and very dry. The rapid, faint beat against his fingertips said she was still with the living, but he was with his brother on the not much longer part.

“She’s alive. Rapid pulse, dry skin. She’s dehydrated and probably suffering from heatstroke. Let’s try and get a little water down her,” he said.

Merrick stood up and walked back to his bike. He returned a moment later with a bottle of water, unscrewed the cap and handed it to him.

Cassius slipped his arm behind the woman’s neck and gently held her head up enough that maybe she wouldn’t choke and poured a small amount on her slightly parted lips. At first the water just ran off, making a wet, muddy track down her chin and neck. Then her lips moved a little and her cracked tongue peeked out.

He poured a little more into her mouth this time and was rewarded with a high wheeze cough and soft moan. As he continued to slowly add more water to her mouth, she managed to swallow more of it each time. When her eyes opened, he pulled the bottle back and looked down into dull, doe-brown eyes that still didn’t seem to see much.

She winced, and her throat muscles worked but nothing came out. She finally nodded.

“I’m going to give you a little more water but not much. If you drink too much right away you’ll only end up getting sick and throwing it back up. Understand?”

She nodded again, so he gave her a few more swallows then handed the bottle back to his brother. Her eyes appeared a little less glassy now. He took that to be a good sign. With the sun nearly gone, his view of her began to dim.

“Need a flashlight, Merrick. Then we’ve got to figure out about getting her to a hospital,” he said.

Merrick returned with two flashlights. He handed one to Cassius and aimed the one he held at the woman’s midsection.

“Can you talk yet?” Merrick asked her.

She swallowed with a wince but managed a weak, “Some.”

“Think you can hold on to one of us on the back of the bike if we go slow enough?” he asked.

She looked down at her hands and seemed to be thinking about it. Finally she sighed and shook her head. Cassius noticed then that she was flexing her fingers but they weren’t moving much.

Fuck. She was a lot weaker than he had hoped. Now what were they going to do?

“Merrick. See if you can get a signal on your cell. We need help,” he said.

His brother pulled his phone out of its holder and walked off a ways. Cassius pulled off his jacket and covered the woman. It was getting cool now that the sun was gone. In her condition, the cold would affect her much faster than normal.

“Hey! Got a small signal over here. Want me to call for an ambulance?” Merrick yelled.

“Call the club and get them to bring a truck. Something tells me that an ambulance might not get here as fast,” Cassius yelled back.

He could hear his brother talking to someone then the crunch of gravel as he walked back toward them. When he looked up, Merrick nodded. Good, help was on the way. They just had to keep her comfortable until they arrived.

“Did someone throw you out here?” he asked.

“From where?” Merrick asked, crouching down.

“Don’t jump, or you’ll end up hurting yourself,” he said in an amused voice.

“C–can’t help it when he tickles me like that,” she gasped.

Merrick chuckled then softly rubbed her belly as his brother worked his shoulders between her thighs until they were spread almost wider than she could stand. River had never been able to do the splits and damn if their shoulders weren’t almost wide enough to require it. But then everything about the two men screamed awesome.

To distract herself from Cassius being up close and personal with her girly parts, River studied what she could see of Merrick’s tattooed body. She wanted to ask him to turn on the lights so she could really look at the artwork on him. Ink traveled from an inch above his elbow up his arm to curl over his shoulder and continue down either side. The one on the arm she could see now looked like part of a dragon that covered his upper arm to rest on his shoulder with the wings flapping down on either side, but she couldn’t be sure. The design work on it was breathtaking. River started to reach and touch it, but Cassius’s tongue struck in that moment and everything fell away to sensation.

A flick of his devious tongue across her clit sent her soaring for the sun. She knew if she reached it, she’d disintegrate, but at the moment, she didn’t care. Every rasp of it across her throbbing nub had her cunt tightening and her pussy juices flowing. He pulled back and circled it several times before slipping down to her slit and stabbing it inside of her.

River’s moans and groans soon turned to whimpers and soft shouts as Cassius drove her higher and higher toward release. He slid his hands beneath her ass cheeks and lifted her closer to his mouth as she groaned with his mouth over her clit. A thick finger pressed inside of her sopping wet slit letting her know that Merrick hadn’t left when his mouth had disappeared from where he’d been torturing her breasts and nipples. Now he was closer to her cunt and helping his brother torture her by stretching her hot pussy with his thick fingers. When he seemed sure she was relaxed enough, he pumped his fingers in and out of her.

Now she knew she was done for. With both of them working her cunt over, she’d come soon for sure. Every nerve ending in her body was alive with sensation, keeping her on edge and aware of every touch to her body.

“Move over, Cassius. It’s my turn. She tastes like pure candy,” the big man said.

River’s eyes flew open to see him licking his fingers clean of her cream from when they’d been inside of her earlier. The sight of him obviously enjoying her taste had her body heating up all over again.

Cassius moved out from between her legs to crawl up the bed. She felt Merrick slip between her legs and push them even farther apart before his tongue began licking her slit. Pleasure poured over her as he tasted her, licking her pussy back into full-blown arousal once again.

Then all she could see was Cassius crouched above her. His eyes seemed dark to her now as he slowly lowered his head and kissed her. River tasted herself on his tongue as he thrust it in and out of her mouth before using it to explore and map every crevice. He tangled it with hers before pulling back to nip at her lower lip and trail kisses all along her jaw to her neck where he once again nipped at her.

“I can’t get enough of how you smell and taste, sweetness,” he said in a gruff voice.

Before she could respond, he dipped his head and sucked at one nipple, pressing it flat to the roof of his mouth with the tip of his tongue. He drew on it in long slow pulls, sending tiny sparks of electricity directly to her clit. The fingers of one hand toyed with the other nipple, pulling and pinching it until she couldn’t remain still beneath him. River squirmed, needing more.

“You’re both driving me crazy. Don’t tease me like this. God! I can’t believe I’m doing this,” she rasped out.

“What? Having multiple climaxes until you can’t think?” Merrick’s deep voice came from between her legs. “’Cause that’s what we’re doing, kitten. Giving you so many that you won’t be able to remember your own name.”

Hungry for Her Mates (MFM)
Marla Monroe
In Shelf
$0.99

Safe and Burning with Ecstasy (MFM)
Tonya Ramagos
In Shelf
$0.99