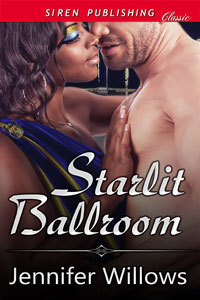 Sunshine Edwards tore up the strip of highway between her and her office in half as she rode her Ducati Superbike. She was late that morning, as usual. Sunshine had a few bad habits, but the main one was her time management skills, or rather lack thereof.

But she was beyond tired. She had too many late nights to count, endless seasons without a single full night of rest.

As she navigated the twists and turns through the desert, Sunshine thought about the odd twist of fate that had brought her to the land of sun and ever-present heat. Just a few short years ago, she was a fresh college graduate with an overwhelming debt to skill ratio.

When she left school, she was just as naïve as newborn lambs and her degree burned a hole in her pocket. Her parents swore up and down that her degree was useless, as she was a dual major in art history and fashion design.

But her real passion was for elaborate costumes and period clothing. There was part of her that was always fascinated by the heavy bustles and corsets worn to balls in regency England.

That was the reason she was able to fall into her current position so easily.

Back when she was first hired as the wardrobe head for the show, Khalid, she was an imperfect fit. Her professor recommended she send in a portfolio, despite the experience requirements that she lacked and the glaring holes of time her education left on her resume. Sunshine did as recommended, despite the fact that she had to create a portfolio first and under the wire at that. The producer had stopped accepting applicants the week prior.

However, her professor, Talbert Rothmeier, was a close friend of the producer and was owed a favor. When she put together the tiny folio of her best work, she only had twenty pictures. But all of them were perfect. The photos were as close to professional as possible and every detail in the frame was well chosen.

But despite the fact that she had given her best, she wasn’t even in the frame of mind to think she would be offered the job. However, she was wrong.

The producer, Justin Allens, said her clothing spoke to him and he hired her, despite the fact that no one in the studio wanted to give an unknown the amount of responsibility that Sunshine was to be given.

The series was based on Egyptian gods and goddesses that toyed with humans at their whims. She loved the plot and the idea that there would be many opportunities to play with different modes of clothing from different time periods as the gods wandered through time the way humans walked from one place to another.

The show’s staple gods also had the chance to meet gods of other mythology, so there were endless plot angles and twists that would leave her in dusty books for days to deliberate over seams and trimming.

The accessories alone were to die for.

She had control over every stitch of fabric that would be placed on set. She even was able procure a weaver for the specific purpose of making the correct blend of fibers for the era. Not to mention she would have control over three seamstresses and two junior designers.

Sunshine had given up a lot to take the job on. She had to move from her beloved Virginia to the other side of the county for most of the year. She had to leave her family and friends behind to start a new life alone.

But Sunshine loved every second of it. The whole of her life seemed filled with endless possibilities and adventure. And she planned to grasp it with both hands.

The first day was interesting as she learned the ropes on set. Who she could consider a friend, and those she could consider an ally were quickly distinguished. She also learned she had a few enemies as well. Sunshine was unused to people disliking her. Her personality was too sunny for that.

She moved to a small apartment in a one horse town a half hour from the set as it was in her price range due to the lack of real location. There was still a bundle of student loans to pay off after all, and she wanted to be free from the monetary chains of the education she just enjoyed as quickly as possible.

But after working with wardrobe team at her disposal for three long weeks, they had produced what was going to be one of her most amazing creations yet. It was for Cleopatra.

Sunshine remembered meeting the headlining actress, Sabrina Turner. The other woman was a beauty and was the current Hollywood darling, in a similar stratosphere as Carrie Underwood, and halfway to Sofia Vergara pay, that is if she listened to gossip.

Although, she didn’t have time to listen to gossip.

But she should have. There had been plenty of whispers about the headliner’s attitude. She was known as a harpy that loved to browbeat those around her. The only people the woman knew how to be polite to were supposedly those that helped sign her paychecks. Not to mention that other workers on set claimed Sabrina had issues with her pay for the contract.

The day the dress was finished, Sunshine walked over to the studio with the completed costume. It was a marvel, shot with golden threads and ringed with a necklace of lapis lazuli. There was a shawl to go with it and she wondered if the golden torque would even be tolerable under the set lighting.

“You ripped my dress!” She backed away from him with venom pouring from her eyes. If looks could kill.

“I can fix that,” he said seriously, but he couldn’t stop the laughter that welled in his chest.

“Really, so you’re a seamstress now?”

“I can buy you another one.” Although, he had never seen the like.

“You can’t buy this dress,” she scoffed.

“You think me a poor man, Sunshine?” He probably didn’t make the same that she did, but he was careful and lived simply. His extravagances were used to travel and the occasional gadget that he liked to play with.

“No.” She found the humor in the situation and smiled. “I made it myself.”

His laughter died immediately. “I am sorry, Sunshine. Your dress is a work of art.”

One that he had callously destroyed with his ham-fisted dominating behavior.

“It’s okay. I can fix it.” She tugged at the neck of the ruined dress and he could see she struggled with it.

“Let me help.” He walked behind her and looked at the row of buttons and wondered if he was wrong. There was no way to get into the dress without help.

Maybe Arc was patient enough to button each fastener with care.

If it were me, I would never be able to manage it. I would fuck her twice before I got them done.

The zipper was well hidden and after a few seconds he slid the tab south and watched the reveal of her body as she came free of the delicate, lacy cage. She only wore a set of brown underwear that nearly was the same shade as her skin and his dying erection was resuscitated back into glorious life.

When Sunshine hung the dress with care, he felt another wave of guilt take residence in his chest. He would make it up to her. Svyatoslav unbuttoned his shirt and kicked off his shoes. He would keep the pants on as reminder to take it slower than his usual all-or-nothing pace.

Before she could turn around, he skimmed over her rib cage with his hands, felt her chest rise and fall under his fingers.

“Svyatoslav…” she moaned. His name falling from her lips in that sultry manner almost unmanned him and at the least took him aback.

Fearful his throat would clench up, he whispered, “Yes, Sunny?”

“It will be more than this.” She shivered and he couldn’t stop himself from biting the naked slope of her shoulder.

“Yes.” Sunshine groaned and tossed her limp head back onto his bare torso.

Her hands wrapped atop his, and he waltzed them backward until his hamstrings hit the bed. When the mattress stopped him, he turned around and tossed her onto the waiting frame without any warning. She laughed and bounced twice before she settled into the bedding.

She leaned forward and clutched at his belt buckle. He didn’t let her grab him. He would rut her like a wild beast if he let his thinly held control go.

“Give me your hands,” he said from the safer distance he’d put between them.

She nodded and held her arms out, which he quickly bound with the lace sleeve from her torn gown. “Why?” she asked when he was done, although the question seemed funny as it was posed after he’d already restrained her.

“Touch too much.” He had lost the ability to speak.

It was one thing to touch her when they danced, but another to touch her with ability to have everything that had remained hidden from him.

He grabbed her calves and tugged her to the edge of the bed, where he discarded her sodden panties. Before he released the fabric he had to take a whiff of the nectar she’d wept into the stretchy material. Once he took the breath, he zoned in on the source of the scent and lowered his face within inches of the juicy folds. She was bald, his little virgin looked cleanly waxed.

One look at her cunt was all he needed to know she was untouched. The mound of her sex was a half-peach shape and the outer lips barely furled open. The inner lips were more elastic than a new unstreched rubber band.

Just before his mouth descended, he had to ask her a single question. “Has anyone tasted your cunt before?”

She blushed from the forehead south to her belly. “No.” It was a weak mumble.

But he was even more aroused by that idea that he was her first for everything.

Everything good that is.

So he leaned up and snatched a pillow from above her head. “Bite when it is too much.”

She shuddered so violently, he almost stopped his descent back to her waiting cunt. But she wanted it just as much as he did. Maybe even more.

He rubbed a finger down the cleft to split open her peachy sex and wanted to spend himself in his pants.

Get ahold of yourself, Svyatoslav. For god’s sake, she is a virgin!

But he couldn’t tamp the hunger for her any longer.