When Rachel Winthrop, a brilliant businesswoman who has a poor track record with men, meets Matthew Shepherd, an artistic genius she hired to take a simple corporate photograph, she finds his methods quite unconventional. In order for him to capture the look he’s after, he coerces her into a sensual pursuit of the perfect, if not corporate, photo. First, he strips her bit-by-bit, then teases her body with his mouth until she is sun-kissed, stretched naked and on fire. Throughout the shoot, he brings her repeatedly to the precipice of an orgasm, only to make her wait.

Matt is convinced the photos he’s taken of Rachel are his best work and should be shared publicly because they will remind the world that embracing our human sexuality is the most beautiful thing there is. Every gallery is open to him—it could be the greatest thing to hit New York. But Rachel will not allow it. She has a reputation to protect.

Is Matt introducing her to these things to help her or does he simply want to exploit her? 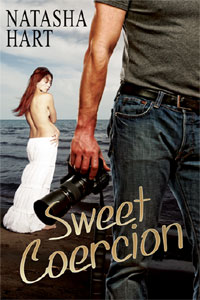 Shepherd stood at the edge of the lake.

The sun was out, it was a mild 78 degrees and almost no wind. Even though I hadn’t thought I wanted an outdoor photo, I had to admire his eye. This would make a lovely backdrop. He had three tripods set with impressive-looking cameras and a smaller one hung around his neck.

“You ever swim in the lake?”

“I use the pool.” I pointed to the pool, discreetly obscured by trees and other vegetation to accommodate my penchant for swimming in the nude.

He looked me up and down. “Good.” He snapped a few shots, then pulled back.

Rothy had arrived and was laying things out.

“You bring the mirror?”

They set up a wide, floor length mirror behind the three tripods.

Shepherd leaned in close. “The mirror is so you can see what I’m doing. Rothy, she’s not right yet.”

Shepherd circled behind me and stood so close I could feel his breath against the back of my ear. I watched him in the mirror as he massaged my shoulders, working his way down my arms and positioning me so that I could see myself even better in the mirror. His touch was like an opiate. His lips brushed my lobe as he spoke.

“Watch the mirror, Rachel. Don’t take your eyes off your reflection.”

I watched, intrigued by his movements, hoping he would keep massaging me. He reached his hands around and placed them in the valley between my breasts.

“You’re going to love this,” he whispered. “Watch the mirror.”

I watched as he ripped my shirt open. Buttons went flying. I gasped and almost lost my balance. I was so shocked by what he’d done, I couldn’t find any words, but was even more shocked at the way my pelvic muscles contracted, flooding my jeans. It took my breath away. He steadied me, then fingered the bottom two buttons, still intact, and decided to leave them alone. He tucked the ends of my shirt back into my jeans and grinned.