Steven Kincaid is the last unmarried male in his family…the much-lamented unmarried male. He knows he needs a good woman, but the right one hasn’t come along in his thirty-seven years. Until his new neighbour moves in.

Meg is not the marrying kind, and Mr. Kincaid needs to keep his distance so that she can keep her sanity. Unfortunately, the accident-prone man is getting under her skin—and she is starting to like it. But growing up as she did has made her wary and feeling unworthy of love. When her parents show up, it will be up to Steven to be her buffer and the thorn in her side that makes her re-examine her life.

Steven Kincaid had grown to despise microwave dinners with a passion. Tough beef dinners, rubbery vegetable dinners, mushy pasta dinners. He hated them all. But still, he kept his freezer full of the little trays with their tasty little pictures, hoping one day he would peel back a label and discover that what was depicted on the packaging was really inside. It was an exercise in continuous disappointment.

Takeout food had its advantages. It was usually quite palatable, and he didn’t have to do so much as push a button to get it. Well, he conceded, he did have to use the phone and fish money out of his pocket, but the end result was a darned sight more appealing than cardboard steak and lasagna that resembled wet tissue dipped in tomato soup.

He sighed hugely and gave his pseudo-mashed potato a dispirited shove around the tray. Such was the life of a confirmed, thirty-seven-year-old bachelor, he mused. Long evenings in a deathly quiet apartment with nothing but a television and paperwork for company. Well, it was almost quiet.

Another thump came from the apartment next door.

Steven’s ear quirked automatically. For two days an odd assortment of people had been traipsing in and out of his new neighbor’s place—men with long hair and bulging biceps, women with colorful clothes and dangling jewelry. He’d yet to lay eyes on the woman who was moving in, but he’d guess she was a hippie type if her friends were any indication.

The last tenant had been cheerful and minded his own business, keeping to his side of the old renovated duplex with dependable consistency. Steven had never felt the need to purchase earplugs until now. Surely the woman next door could get settled without all that bumping and groaning.

He could have gone to his sisters’ house across town for some company. However, the twins were always telling him he needed a woman, so that was out for now. Disagreeing was not an option. His brothers were all married with kids, and even his college buddies had taken the plunge this past year. It was assumed that he was next to go. The last man standing.

As the racket in the other apartment intensified, he shoved his hands through his sable-brown hair in frustration. Was there really any need? he wondered again. How could one person have so much stuff to move from one place to another?

A low moan reached him as he dumped the remains of his dinner, the sound making him think of sex and the fact that he hadn’t had any in months. The last woman he’d dated had seen him as a convenient step up the corporate ladder, and he’d spotted the signs. He was definitely making it a rule from now on not to go out with business associates.

The phone whirred when he went back to the living room. Steven stared at it for a moment before picking up the receiver, contemplating the merits of a hot shower on his aching six-foot-three frame. It could be his mother calling from Bay de Chance to enquire about his love life. Perhaps it was his partner, Jonas Mackenzie, wanting to pick his brain over some computer program they were working on.

“Hello,” he answered on the fourth ring, hoping the other half of MK Electronics was indeed calling to relieve his boredom.

“Is the noise bothering you?” asked a husky, feminine voice.

“The noise. Is it bothering you?”

Realizing it must be the new tenant, Steven sat up in his chair and decided to have a little fun at her expense. “Heck, I don’t mind a bit of sound interrupting my sleep. My bird, on the other hand, is having a problem.”

“My cockatoo. Bazil’s very upset.” Steven grinned and relaxed in his chair again.

Silence stretched for a minute.

“You have a…cockatoo…named Bazil.” It was not a question, more like a slow statement spoken to a dim-witted child.

“Well,” he postulated, trying to recall the condition of an abused bird he’d seen at the vet’s clinic, “he keeps plucking his feather’s out. It’s a terrible sight. Poor Baz is just wretched.”

A soft gasp echoed in his ear, and he congratulated himself on his meanness.

The woman tremulously remarked, “I am so very sorry. No more noise. I promise.” She hung up.

Steven idly wondered how she’d got his number. Then again, the landlord was a gossip and tended to chat more than was tolerable. The elderly gent had probably dropped his name in conversation, and she’d looked it up in the phone book. How sweet of the lady to be concerned with his comfort—and he’d laid a guilt trip on her over a nonexistent bird. How shameful!

He chuckled dryly to himself. Old age must be creeping up on him if he found being cantankerous that amusing. At least the din next door had stopped.

The phone trilled again, cutting into his moment of smugness. “Hello.”

The Voice said, “I didn’t think we were allowed to have pets here.”

“Ah, no.” That particular detail had escaped his lying brain. “Mr. Rupert doesn’t know. Don’t turn me in,” he begged pitifully. “Baz doesn’t have anyone else.”

“Doesn’t he squawk a lot?” she demanded suspiciously.

“He’s much quieter than my new neighbor.”

“I’ve apologized for that.”

“It didn’t help Baz. He’s damned near plucked himself featherless! I’ll have to put him on the Happy Pill all over again.” By now, Steven was choking on his laughter and couldn’t contain a snicker.

“Do you really have a cockatoo?” The Voice turned slightly menacing. “Because if you are so cruel and deranged as to deliberately yank my chain—”

“Cruel? You’re the one giving me a headache!”

“I’m coming over to inspect your bird.”

Alarmed, he bolted upright in his chair. “You can’t.”

“I don’t believe you have a cockatoo,” she stated firmly.

“I do. But thanks to the clamor coming from your place, he’s not only pestered but frighteningly ugly.”

“No living creature is ugly.”

“Bald is in.” She slammed down the phone.

Steven held the receiver away from his ear and smirked. She may be a throwback to the Me generation but she had enough compassion to be influenced by the image of a tortured white parrot—whoever she was. He should have asked for a name. It was probably Moonbeam or Sunflower—Sunny for short.

Ping? What the hell is she pinging? 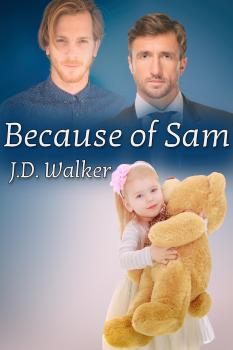