When Vivian Kincaid's eyes meet those of a hunky local at the Turkish university her father forces her to attend, it only takes her a split second to recognize her childhood friend. Levent Deniz was the servant boy who taught her to run the streets of Istanbul years before, giving outlet to her wild streak even as a child. Now face-to-face once again as adults, the only thing standing between them and happiness is her father. The newly appointed Consul General for the United States has other plans for his only daughter. Ones that do not include a former servant, now successful entrepreneur and businessman. He will do everything in his power to keep them apart. The Diplomat's Daughter is set in 1960s Istanbul and tells the story of pre-destiny, passion and the rebellious power of true love. 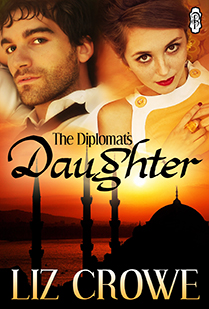 “I’m really late. I’m usually home by midnight. It’s what, two in the morning? Will you walk me there?”

“The American Consulate is too far to walk from here.” His protective nature flared up. “I’ll find a taxi we can trust.”

“Okay but won’t you get in trouble, out this late with a yabanci female?” He grinned and ran a finger down her face, ending at her lips. She took the tip between her lips and sucked. He shivered, which made her grin. “I’m no angel, Levent. Never have been. You know that.”

“Yes, I do. It’s what I missed most. Well, until now.” He had to taste her once more. The sweetness of their kiss nearly made him cry like a girl. Dear Lord but this only meant trouble. There was no denying it. They could never be together. But his life would be over otherwise. He took her by the arm and led her up to the still busy street.

He tucked her behind him and whistled for a taxi, knowing no one who thought he had a woman with him out this late would stop. A small yellow cab screeched to a halt. He piled her in, finger to his lips. “Greetings, brother. Thank you ever so much for stopping. Would you mind terribly getting us back to the American Consulate? My sister is meeting her friend there. They are very good friends.”

The cabbie grumbled, but in the way of all Istanbul drivers, barely looked over his shoulder before peeling back out into traffic. Vivian kept trying to touch his leg and as much as he wanted it, he knew it would never fly inside the taxi. So he pushed her toward her door. She stuck her tongue out. But he merely nodded toward the driver, letting her know to cool it. They sat, weaving their way through the pre-dawn traffic his heart soaring as he took in her profile. Her exquisite, delicate features, long brown hair begging him to bury his hands in, full red lips swollen from his attentions. Her hands were clasped in her lap, as she stared straight ahead. Levent glanced at the driver then snuck a hand over to hers, covering them both. The heat from her skin made him bite back a groan. He kept his hand there, wondering what in the hell he could do about the fact he was head over heels for this girl again—the one girl he couldn’t have.