The Last Temptation of Eve (MMF)

Eve Darling is about to experience many changes in her otherwise routine life. The successful proprietor of Eve's Temptations, a specialty bakery, she's no stranger to hard work, but when her dashingly handsome employee, Jake Randell, decides to ask her out dancing, she's more than willing to let her hair down.

Jake's had a thing for his boss since the first day he started working for her. But there's a problem. He's already involved with the incredibly sexy Peter Clarke. Yet he can't deny the strong attraction he feels toward Eve. He wants both of them, but can a ménage relationship work outside of his fantasies?

Peter's in love with Jake. Jake's everything he ever wanted in a man and then some. However, he's not so sure about bringing a woman into their relationship. Can he handle sharing?

Three people come together, and in one night their lives are changed forever. Can fantasy become reality, or should some things remain just that? They're about to find out.

The Last Temptation of Eve (MMF)

“How did it go?” Amy asked when Eve got back to the shop. Amy had been with Eve for a year and worked on the counter out front, overseeing the shop and serving customers. She also took orders and booked appointments with potential clients.

“The bride was a nightmare, and the wedding planner…let’s not even go there. But it’s all done and over with now. What’s been happening since I’ve been gone? Is Jake around?”

“Jake’s gone out to deliver the last few orders that came in. The French vanilla cupcakes are selling like hotcakes.” Amy leaned back and grinned, pleased with her little joke. “And the shop’s been busy with customers dropping in. It’s been a good day for sales. You’re going to have to up the supply to meet the demand. We’re sold out of a couple of items.”

“Great.” Eve removed her coat. “How long has Jake been out for?” Jake was her delivery guy and jack-of-everything-else at Eve’s Temptations. He was easy on the eyes and a hard worker, both qualities she enjoyed immensely.

“He’s been gone almost an hour. He should be back soon,” Amy confirmed. “The roads are a little wet from the rain shower. I hope he makes it back all right. There are so many bad drivers out there, and you have to be so darned careful.”

Eve nodded and walked to the back of the shop to her office. The first thing she did after grabbing a cup of coffee was to sit and sift through her e-mails. There were invoices to be paid, along with inquiries from the shop’s website looking for estimates on various occasion cakes. Novelty cakes were big. She could easily make a cake in the shape of almost anything. Eve scanned the rest of her e-mails, and after seeing nothing much of importance, she closed out the computer screen and took a sip of her coffee, only to see Jake standing in the doorway to her office.

“Traffic’s killer out there,” Jake said, his hands shoved deep inside the pockets of his well-fitted pants. “And some idiot almost rear-ended me. I was at a red light, and the bastard wasn’t paying attention. I think he was texting or something.”

Eve stood from her desk. “You didn’t get hurt, did you?”

“I’m fine. I managed to avoid it with a quick turn of the steering wheel. I was a little shaken, but I’m fine.” Jake smiled, and his stark green eyes lit up. “Don’t worry your pretty self over it.”

“I wasn’t worried. I was concerned. There is a difference, and if the delivery van got damaged, or if you were injured, my insurance would have gone way up. The premiums are high enough as it is.” The last thing Eve needed to worry about was liability issues.

Jake knew he had it going on, and his flirting with Eve hadn’t gone unnoticed. He was open and blatant about it, even though she was the boss and he was the employee. Getting involved with an employee wasn’t good. However, he was so damned good to look at, from his lush, curly black hair that framed his chiselled face perfectly, right down to his muscular, toned body. Jake wasn’t a gym bunny, but everything about him was perfection personified and then some.

Jake placed his hand on his chest over his heart and pouted. “You don’t know how much it warms me to hear you say that. Seriously, don’t hold back or anything.”

Eve rolled her eyes and couldn’t help but smirk. “Did you look at what’s on the agenda for early this week?”

“It isn’t anything we can’t handle. Tuesdays are usually slow. That’s why you open later than the rest of the week.”

Jake was right. Tuesdays never yielded many delivery orders, for some reason, and most of the business of the day came from customers who took the time to come into the store to purchase what they needed. “I could use a slow day.” Eve couldn’t believe she said that. She’d worked so hard to make Eve’s Temptations a success. Hell, she’d fought tooth and nail just to get the financing from the bank, not to mention appealing to the small business loan center in town. That in itself was no easy feat. Along with both loans and a generous gift from her father, she was able to make her dream come true.

“We all need a break now and then.” Jake shifted awkwardly from side to side. “Which leads me to my next question, and I want you to actually think about it before you answer.”

“Which is?” Eve questioned. She couldn’t begin to think what was on his mind. He probably wanted a day off.

“Would you like to go out with me tonight?”

Under the dim glow of lit candles, Eve felt two sets of hands upon her. She closed her eyes as they undressed her, leaving her in her bra-and-panty set.

Eve did. She watched as Jake and Peter removed their shirts first and then their jeans. They really were a beautiful sight to behold standing next to each other.

Eve took a deep breath, and when Peter guided her in place, his hands massaging her bare back, she shuddered as excitement ripped throughout her body like nothing she’d ever experienced before.

“She’s perfect, isn’t she?” Jake hooked his thumbs into the waistband of Eve’s panties, and in one swift movement, he yanked them down.

“And a great ass,” Peter added.

Eve turned and looked over her shoulder. Her knees trembled slightly when Jake knelt down and pulled out a black wooden box from under the bed. It was long and rectangular and opened easily. In his hand, Jake now held a small paddle. The idea of pleasure and pain mixed together was intriguing, but Eve wondered if she’d be able to handle it.

Jake stood at Eve’s right side with Peter on the left. First, Jake ran his free hand across her buttocks. Then he pressed the cool paddle against them one at a time. “This might sting a little at first,” he warned. His eyes were intense, and his chest heaved out slightly as he spoke.

“Only if it’s done well.” Peter climbed on the bed in front of Eve and started massaging her shoulders. “Relax and enjoy. You won’t be disappointed.”

It wasn’t bad at first. In fact, the first few light smacks amused Eve more than anything else. She felt extremely naughty, and she even wiggled her ass a little in response to Jake’s paddling, but as Jake progressed, the swats became harder. First it tingled a little, and then her cheeks started to sting and grow hot. Something unexplainable switched on inside of her, and her clit tingled every time the paddle made contact with her skin.

“Tell me when you want me to stop,” Jake said. “I want this to be pleasurable for you.”

It was. Eve writhed a little, and a small gasp escaped her lips. Peter held her up, and her head now rested against his firm torso.

“That’s enough for now,” Jake announced. “Too much can wear a person out.”

Eve imagined that this was a very true statement. She nodded and climbed on the bed after Jake patted her ass.

Peter adored Jake and loved it whenever Jake took control in the bedroom when they got together for some fun. Eve had stepped into their world tonight, and things were about to get very interesting.

Eve looked a little wary. It was easy to see that she wasn’t completely comfortable with him and Jake. Peter caressed Eve’s hair, feeling its silkiness beneath his fingers. Her nipples reminded him of ripened cherries. They begged to be sucked and pinched. Peter knew what was coming next, and when Jake beckoned him to join him at the end of the bed, he did as he was told, his cock rubbing against Eve’s side as he scooted into position alongside Jake between her legs.

“Perfect,” Jake murmured. He spread Eve’s legs wide and leaned in to inhale her womanly scent. Both men settled between her legs and rested one foot on each of their shoulders.

Peter heard Eve say something, and he smiled when she reached down to touch her clit, only to have her hand quickly brushed away by Jake.

“No playing with yourself. That’s why we’re here. It’s all about you, Eve. Enjoy the ride!” Jake grinned and glanced over at Peter. “Lick her pussy.”

Peter ran his tongue across Eve’s slick folds. She had shaved. He liked that. She tasted sweet, yet there was slight saltiness, too. Her skin felt like velvet on his tongue, and when he sucked her engorged clit into his mouth, Eve bucked up slightly.

“Suck her clit,” Jake said. He moved in closer to Peter, and when Peter pulled away from Eve’s pussy, Jake kissed him.

Eve sat up a little, and Peter knew she was watching them. He turned away from Jake’s kiss and made eye contact with her. “You like?” he asked. Lots of women liked seeing two men together sexually. Peter knew this from experience. This wasn’t the first time he was involved in a ménage. Most of the guys he’d dated in the past were bisexual like Jake, though less dominant.

“I like everything so far,” Eve replied. There’d been a change in the tone in her voice. She sounded more complacent and less nervous. The spanking administered by Jake did its job after all. 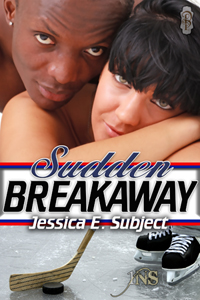