Rising from a desert pool like the Great Goddess, Seraphina’s lush naked beauty tightened The Desert Hawk’s loins, and he wanted her like no other woman before. However, she was promised to the Sheikh of Moortazan and had a life time of obedience and duty before her.

Whisking her away to a remote encampment, Hawk overwhelmed Seraphina with his sexual charisma, and she willingly succumbed to his driving need. Heat sizzled, passion flared, and bodies entwined, and although virginity was lost, in the end was it lust or love that was found?
Could what Seraphina felt for The Desert Hawk truly be love, or was she really suffering from that terrible malaise—The Stockholm Syndrome?

Sighing in delight, Seraphina reveled in the cool water as it cleansed her flesh, washing away her tiredness along with the accumulated sand. Stardust whinnied softly, delicately gobbling his feed. Reaching up, she pulled the clasp that held her hair in a bun and it cascaded down like waves of gold past her creamy shoulders. The oasis was a little bit of paradise, an Eden in the desert. Tall boulders sheltered the shimmering pool from the heat of the day, and a couple of lush palm trees swayed gently in the soft breeze. Not knowing where she would find the nomadic people or how long it would take, she decided to spend the night in this delightful paradise. Some desert animals would make their way to the pool to drink as the sun set, but there was nothing so dangerous that they gave Seraphina any cause for worry. Spiders and snakes were her worst fears, but if left in peace they would usually give a human a wide berth, especially if she got a good fire going. Or she hoped so, anyway. For the moment, she felt a sense of relief, safe from the oppression of duty and no longer constantly looking over her shoulder. Her uncle would not know which way she had come, so she had little worries that she had been followed. Stardust whickered again, tossing his head and pulling at the reins she had tied to a tree. Brought out of her reverie, Seraphina lifted her head like a startled deer. Someone was approaching. God no, don’t say her uncle had found her already?

Swiftly moving toward the bank, Seraphina suddenly came to a halt. It was not her uncle or his aides who sat astride the three Arab horses on the embankment, but three rough-looking men—bandits?

She sank lower into the water, supremely conscious of her nakedness. The man she took to be the leader leaned forward in his saddle, his hands loosely holding the snorting black Arab’s reins.

Seraphina shivered, not from cold but from the feeling of dread that seemed to creep up and down her spine like an arachnid. “I-I’m sorry, but I don’t understand French.”

The man stared hard at her, his eyes black pools in his ruggedly handsome face with its light dusting of overnight stubble.

“Well, yes I am, well partly on my father’s side.” She bit her lip to stop herself from talking. He wasn’t interested in her history. Although—she shivered again. Although she hated to think of what he was interested in?

“So English Miss, I will repeat in the language you can understand. What are you doing here?”

Condescending pig! “Well I’m, err, I’m—” God how could she answer him?”

“A woman alone out here, miles from everywhere, that is a little suspicious—no?” He raised an enquiring eyebrow.

“No—err—I mean, yes I suppose. However, I’m just out for a ride. My, err, father and my uncle and even my fiancé will be out looking for me and will be here shortly.”

A wide grin slashed across the man’s face. Looking at the other men, he said something in French and they all laughed.

Scared and desperate and feeling at a complete disadvantage, Seraphina had to hold back the tears. It would never do to let these men know just how scared and vulnerable she felt.

“I think not, Mademoiselle. I think you are here alone. Maybe you have run away from home.”

“No, of course I haven’t, I’ve just said my family are coming to get me. In fact, if I was you, I would leave as soon as you can as they are huge, big, muscular men who will fight you if you remain here.”

The man laughed, humor lighting up his face and dancing in his eyes.

Arrogant pig! “Yes, of course I have one. It’s Seraphina Jones. What about you, what’s your name? I presume you do have one?” She countered.

“Well, Seraphina Jones, I would suggest you come out of the pool before you catch pneumonia. If you haven’t noticed, it’s growing dark and the desert is a cold place at night, and all manner of things come out to drink at this pool. And I am—The Desert Hawk.”

She snorted with laughter as he said his name with a kind of arrogant pride. “The Desert Hawk?”

He nodded. “But you may call me Hawk.”

She sniffed disparagingly. “Well, Hawk, if that is your real name, I’m not coming out until you turn your back.”

“That is something I’m afraid I cannot do. You might run away, or I might be taken unawares and be set upon by those huge muscular relatives of yours.”

“Turn your back. I won’t come out until you do.”

“Mademoiselle Seraphina, unless you come out now, I am afraid my men will have to come in and get you.”

Seraphina looked at the men on either side of him and hesitated. Rough-looking, their clothes less than savory, they were grinning—no, leering in anticipation.

Drawing a deep breath, she squared her shoulders. She was a Princess, so she could do this.

Hawk felt the tentative thrust of Seraphina’s tongue against his mouth. Catching her tongue gently between his teeth, he then licked and stroked his way around the soft damp cavern of her mouth. Moving the hand that cupped her pussy. He gently but firmly rubbed in a small circular action that caused an involuntarily flopping open of her thighs. Feeling a certain satisfaction as the opening of her legs allowed him easier access to the core of her femininity,her pussy, he rucked up the skirt of her robe. She tore at his shirt, popping the buttons and dragging it off his muscular shoulders. Clumsily pressing open-mouthed kisses against his chest, she bit lightly on his nipples before Hawk impatiently pressed her back against the ground.

Hawk trailed his hand over the soft flesh of her legs, the supple curves of her knees, and tenderly fondled her yielding but sore thighs before his exploration found that essentially womanly part of her, her pussy. Finding the sensitive petals of her pussy closed tight against his invasion, he lightly stroked the seam until, like a flower opening to the warmth of the sun, she opened to his caressing ministrations. She was wet, ready for his invasion, ready for his possession. But first…

Seraphina’s heart nearly exploded in her chest as Hawk sat between her open legs and lifted her thighs over his forearms. She could feel her eyes widening like a startled deer as his gaze locked with hers and he lowered his mouth to her pussy.

“No I—you—can’t,” she breathed shakily.

But Hawk paid no heed to her obligatory words, and his open mouth closed over her clit. Sucking it into his mouth, he twirled his tongue around its swollen nub. Opening his mouth wider, he pushed his tongue up and deeper into her, his actions mimicking the thrust and parry of intercourse.

Seraphina’s head fell back and her breath came in short, sharp gasps. The sensations were building, becoming a painful yet pleasurable ache in her pelvis, and pulsating through her body. She cried out, her thoughts muddled, incoherent, and her heartbeat sounding loud and erratic in her ears. She had never experienced an orgasm before and it was an out-of-this-world experience. Something that was magical, something that was incomprehensible, and definitely something that was incredible.

Needing no second bidding, Hawk slowly pushed his cock inch by inch into her pussy until he met the flimsy barrier that protected her virginity. With his gaze locked with hers, Hawk raised his hips and thrust through the barrier taking control of her sweet womanly body. Seraphina gasped with shock at the short, sharp pain his possession provoked, but even before she had processed the discomfort, Hawk was moving again. His cock sheathed deep inside her and his hips working like pistons, he forcefully thrust his cock in and out of her vagina. The pain soon receded to be replaced with a pulsating ache that extended outwards, encompassing her quivering labia, her pelvis,and her womb. Sensations built, wrapping around her like ghostly folds, and she lost herself in the erotic vibrations that were pulsating throughout her nervous system. Wildly out of control she begged and pleaded and begged some more. Imploring him to do it to her hard, to break her in two, and to push in deeper. More than willing to oblige, Hawk rucked the cloak up under her bouncing buttocks, thus lifting her slightly higher, making it possible to allow a deeper penetration. Then, as his cock found a special ultra-sensitive place, a place she didn’t know existed, she screamed in an agony that was also an ecstasy. Hawk’s answering cry as he pumped hot seed deep into her womb blew her mind and she dug her nails into his shoulders, drawing blood.

Throwing himself onto his back, Hawk pulled Seraphina into his arms. With her head resting on his chest, she closed her eyes. She could hear the steady thump, thump, thump of his heart under her head and realized that this man was now as intimate with her body as she was herself. How amazing was that? However, no matter how hard she tried, sleep was still elusive, but for very different reasons than before. Her body still sang in time to the slight pulsation of her clitoris, and her blood still raced hotly through her veins. Pressing her thighs tightly together, she relived the pleasurable sensations that had blocked out everything but her joining with Hawk. Doubts, fears, and anger at her inability to resist Hawk’s charm filled her mind. 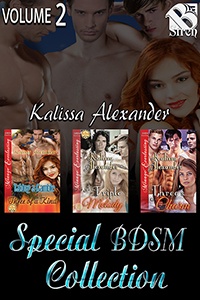