Zane was raised to see the evil that was in the world. With monsters surrounding their village on all sides, it seemed very simple what the evil was. Until Zane meets Tancred and starts to question everything that being a villager stands for.

Tancred knew from the first moment they met that Zane was his other half. Learning that the man was the kin of the humans that destroyed his family caused him to run. Will Tancred learn there is more to Zane than his last name? Or will he lose the man that is the other half of his soul? 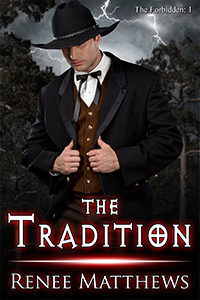 Death. That was all that could be found in the forest that surrounded the village. It was forbidden. If anyone dared to enter, the monsters that resided within would feast on their flesh and leave their heads as a warning, so the villagers would never forget that the Line was all that protected them from the monsters. Zane heard the stories of the powerful clans that had torn their ancestors apart. The hundred-year war, between monsters and the village, had ended with a truce and a Line. A Line marked by the fallen’s blood.

Arthur Vest knew this because he was the man of power. The village resided on his family’s land, and he was the head of the council. The Vest family money had built every home, business, church, school, even the fences, without asking for anything in return. The act of a saint, a hero, and a truly good man, were told to Zane Vest on a daily basis while he was growing up. The expectations of him were set high by the people of the town, who would have sworn by his father’s pure soul and the desire for his only son to follow in his footsteps.

At eighteen, Zane was selected to be a part of the council. This would place him in position to take over for his father one day. It was a rare moment for the village. Arthur Vest showed up with the other elders to see the man that would become their replacement. When the name Zane Vest was called, Zane was not even close by.

Zane glanced around as he walked down Grace Point. Despite the bright name, this was the location where the monsters had been burned. Some had been burned alive. This place left the dead’s loved ones forever out of their reach, as it laid barely on the villager’s side.

Zane walked around and froze at the sight before him.

A man was kneeling on the ground, covering his face with his hands. His tears were still visible, sliding down his skin. The man looked human, but no human ever came here, let alone to shed tears. It was said the more powerful the monster, the more human it appeared.

“I’m so sorry.” The words were heartbreaking as the man choked them out.

Zane was not sure when he moved, but in the next moment, he’d laid his hand softly on the other’s shoulder. The stranger tensed under his hand as he took notice of Zane’s existence. Up close, Zane knew for sure that the man was a monster. His eyes flashed golden and sparks danced around his body. Even the man’s white hair rose to stand on end. Zane had heard of elemental monsters before, from his father. They came from the oldest clan, Common.

The monster being upset was not his fault, and neither was anything else that had happened on this spot. It was before his lifetime. Even the monster being here was not something he had any say or control over. But, facing the monster with glowing eyes, he felt truly sorry. No one had ever looked so lost and heartbroken before. His father often spoke of the monsters’ longer lifetimes with great envy. Zane looked at this being and wondered if he would agree with that. Shorter life spans meant shorter pain spans, according to Zane.

As the monster laughed, his eyes turned a calmer yellow, and the sparks faded away. “You are sorry. A human is sorry.”

Zane couldn’t help but notice that while the monster appeared to relax, it didn’t feel that way. Almost as if the monster were testing him, to see how he would respond to this situation. It was within his right to kill the being, to end him for crossing over the Line. To end one more monster would be a proud moment for any of the villagers. But tears still fell from the monster’s face as he sat on the ground.

“Loss is always something to be sorry for.” Zane believed those words. His own loss bothered him to this day. This man clearly felt the same. Man... this being was clearly a monster, but Zane couldn’t find it inside himself to say that anymore. This man’s actions were the same.

“Perhaps.” The man seemed to be puzzled. Zane watched the man look him over, as if searching for something. “Perhaps you know the grief of loss, but can you ignore your desire to destroy those who break your people’s laws?”

The desire to destroy this man had not crossed Zane’s mind, even when he’d looked at him as a monster. He had seen a being that he could relate to and wanted to... he was not sure what he had hoped to do by speaking to the man. Maybe to help, or talk to someone who might understand the pain he held. Looking at the man with glowing eyes, he still was unsure why he hadn’t done what he was expected to do.

“My mother died many years ago. If her resting place was on your land, nothing would stop me from visiting her. I would kill any who stopped me.” The last sentence came out as a question rather than a statement. As the man tensed, Zane knew the man understood. He was asking if the man was going to start a fight here. Zane watched as the man looked sadly over at the black spot that would remain on the ground forever.

“I watched my grandfather, father, and older brother fall here, by the hand of man. I have no desire to stain their resting place with your blood.” The man’s words sounded lethal, as his glowing eyes turned back toward Zane.