The Union of Haunted Hearts (MF) 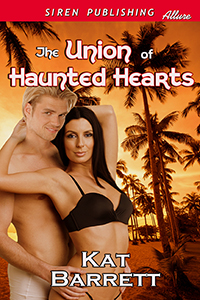 The Union of Haunted Hearts (MF)

The bread was in the refrigerator and she took out four slices, throwing them in the toaster. She checked the eggs, and then opened the cabinet, taking out a can of sliced black olives and dumping them into the mixture. Her next addition was a can of mushrooms, but she wished that she had thought to fry them first. “Oh, well, too late now.”

The toast popped up and Lacey smeared them with butter. On two slices she put honey, and then sprinkled the remaining ones with cinnamon sugar. The omelet was almost done, and she set out two plates, putting the toast in the center and pouring them each a cup of coffee. As an experiment, she added milk and a half a scoop of sugar to each cup. It was how she drank her coffee and she couldn’t help but think that Tareg liked it the same way. The conversation they had the night before about the connections in their lives was spooky, and it drifted back into her thoughts as she dished out the omelets.

Tareg was lying on the bed, his hair wet, his body naked in the morning sunlight. He sniffed. “Smells good.”

“I see you found the shower?”

“Of course not, except I haven’t taken one yet.”

“Oh, thank you very much, Tareg.” Lacey set the tray down on the bed.

He laughed and sat up, spinning to sit cross-legged. “Where is your sense of humor? I was only kidding. You smell like herbs and flowers. Your hair is like sticking my face in a bunch of roses. I used your shampoo, so mine is, too,” he said, fluffing up his wet hair with his hand like a beauty queen. “Will it make my golden locks fluffy like yours? I hope so.”

“I made you smile, didn’t I? Let’s eat before it gets cold. Which toast is mine?”

“Take one of each. One has honey and the other cinnamon and sugar. Sweet toast offsets the taste of the egg nicely.”

He took a skeptical sip of coffee and smiled. “Perfect.”

Tareg took a large forkful of egg, the cheese dripping off his fork as he stuck it into his mouth. “Oh, this is so good! I am going to have trouble being this creative in bed.”

“Somehow, I don’t think so,” she replied, sitting down across from him.

Tareg smiled and took a bite of the toast. “You’re right, the sweet really sparks in your mouth. I like the contrast.”

A song began to jingle from the chair where he had dropped his pants, and Tareg jumped up to answer it. He sat back on the bed, a large smile blooming on his face. “Yeah, that is excellent. Thank you, I will be there.”

He shut the phone and stood up, dancing wildly on the bed, his hair flying about his head. Lacey grabbed the tray, setting it on the side table as he shouted, “I made it into the finals. Yes!” Tareg dropped to his knees and leaned over her, kissing her crazily. His glee was contagious and she smiled, not sure what she was grinning about.

“I don’t believe it!” Tareg dropped back onto his heels and blew out a long, relieved breath.

“Every year they choose the fifteen hottest dancers, and create a calendar. I am one of them. The shoot is in California on Wednesday. I can’t wait.”

“That’s great,” she said, her voice losing its happy edge.

He tilted his head to the side and reached out to take her hand. “Don’t look so sad. This is excellent for me.”

“I got that impression. I am glad that you won.”

“And my thoughts are selfish and silly. Eat your breakfast, and then show me how good it was.”

“You are changing the subject. Are you upset that I will be gone for a few days?”

He put his hands to his throat and fell back onto the bed. “You are killing me with your insults. Why won’t you tell me? Is it that hard to admit that you will miss me?”

Tareg rolled over, cracking one eye to look at her. “Is there a reason that you are staring at me?”

“Am I not allowed to look at you now?”

“I guess not. Do you like what you see?”

“Of course I do. What time do you need to be downstairs?”

Lacey wiggled her eyebrows, running her tongue suggestively over her teeth. “Because it’s only seven and I’m wide awake.”

He chuckled at her expression. “Wanna go down to the gym?”

“Not really. It is a bit too public for what I have in mind.”

“I kind of passed out on you last night, didn’t I?”

“I think we both passed out. Too much fresh air, good food, and sun. I’m feeling much friskier this morning.”

His boyish giggle was adorable, and Lacey crawled over him, staring into his eyes as she lowered her mouth to his lips. Tareg was pliable beneath her, molding himself to her body as he wrapped his arms around her. His tongue slid around hers. Their lips crushed against one another as passion flared between them. It was a kiss that lingered, their lips parting only to rejoin a second later as they adjusted their heads for a more comfortable connection of flesh. His hands drifted down her body, caressing and kneading her skin.

Tareg grabbed the bottom of her negligee and pulled it over her head before flipping her onto her back. The roll was perfectly executed, Tareg’s skin never leaving hers. His mouth lingered on her body, kissing her chin, nibbling on her neck. He licked the hollow in her throat, leaving wet skin behind. His hands were drifting up her sides as he slowly moved down her chest, kissing her in a wave of slightly wet touches of his lips. His finger rolled around her breast, squeezing the flesh firmly, but not so he would hurt her. The touch was luxurious, making her nipples long for his touch. He swirled his hot, wet tongue around the outside of her nipple, and Lacey gasped. She had forgotten what such a gentle gesture felt like. Her breasts were singing his praise, the sensory nerves sending zingers of blazing sensation down into her pussy. She was filled with desire that was both physical and mental, her mind desiring him as deeply as her cunt did.

Tareg slowly licked to the opposite breast, sucking the nipple into his mouth. The pressure he was applying was perfection, her flesh puckering tightly in enjoyment. She had always been amazed that such a simple touch could thrill a spot halfway down her body. Someone needed to do a study to find out what pathway created such a wonderful sensation in her pussy from his mouth on her breast.

He released her softly and continued his lip’s journey downward. When he got to her belly button, he blew a raspberry, making her squirm beneath him. He sat back, flipping her to her stomach and crawling up between her legs. Tareg grabbed her hips, holding them firmly as the head of his taut arousal slid within her pussy. The filling pressure of his dick caused her to arch her back into his chest. To have him encased in the heated throb of her cunt was wonderful. Tareg moved one hand on her breast, his palm massaging her skin as his fingers fiddled with her tingling nipple. He slid the other down her stomach, separating the folds of her pussy to play a matching symphony on her clit.

Lacey responded in perfect synchronicity to each thrust, her hands on his sculptured thighs as she turned her head to kiss him. Tareg set a slow pace, filling here and then leaving her almost empty. Her muscles tightened with his absence and then soared ever higher as he again breached the sensitive flesh. It was bliss, their bodies blending together as if they had been together for an eternity. His hands were warm, the soft coolness of the air conditioning blowing against her overheated skin. His fingers twirled slowly around her clit. He moved her sensitive little button in all the right directions, clockwise and then slightly up and down. Her pussy was throbbing with pleasure, the feel of him growing with the movements of their bodies. The low rumble of his snarls of enjoyment echoed through the room, blending with the mewls forced from her throat by the quickening friction of his dick within her. It was glorious, her body responding with desire, the heated demand of nerves set to flame. 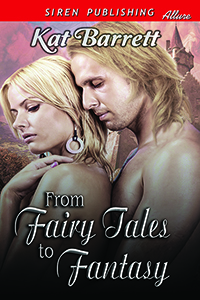 From Fairy Tales to Fantasy (MF)
Kat Barrett
In Shelf
$1.99