Life is good for Adalbert “Doll” Klein. He has his beautiful sexy Italian, Vittorio Genovese, by his side, he has his pennyfarthing and his job at the Arabesque Theatre. The only wrinkle is the presence of Myron Cornwinkle, who has designs on Vittorio, but the man has no chance. Doll owns Vittorio’s heart.

Doll sneers at Myron’s claims of being a wizard. Until the day he goes to work and his whole world changes when Myron pulls his wand and casts a spell, and suddenly, all three of them are stuck in prehistoric ages!

Is there a way to undo what Myron has done and return to where they belong? And if Myron doesn’t clean up his act, will he survive the experience?

And is there something lurking in the jungle that might be even worse than the dinosaurs? 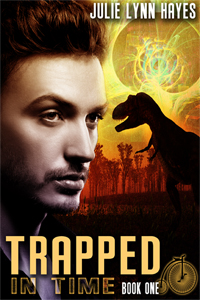 More From Trapped in Time

I especially did not expect it in the middle of a strange jungle populated by at least one Tyrannosaurus Rex.

“Verdammte Schweinehund,” I mutter beneath my breath as I reach for Vittorio’s hand. His eyes meet mine, and it’s as though an invisible thread runs between his mind and mine, and I know just what he’s thinking. Let Myron stew in his own juices.

I bow from the waist, before offering my lover my arm. He accepts it, and we turn away from the fuming pile of pestilence known as Myron Cornwinkle. I cannot help but smirk, because I have every confidence that we’ve not only not overplayed our hand but that we have, in fact, just gained the upper hand.

We start to slog our way through the dense undergrowth. Large, verdant fronds bestrew our path, and gnarly vines grab at our ankles, attempting to cling, but with our arms entwined as closely as our hearts, we manage not to fall. At the last moment, we veer away from a particularly damp and earthy-looking patch of ground that may or may not be quicksand—it’s best not to take any chances.

We’ve barely skirted the potential trap when we hear a noise behind us. We collectively turn our heads to behold Myron scrambling after us. By dint of sheer luck, he avoids stepping in the swampy morass but trips over a thick vine and tumbles at our feet. I suppress a snicker. Barely.
Myron begins to swear again, but all I can make out is nibcocked. Before I can protest his language—more particularly the inference implied in that insult, which I’m positive is directed at me—Vittorio reaches down, grabs Myron by the shirt, twisting it about his fist as he lifts him bodily from the ground to dangle helplessly in the air once again.

“Myron, we do not appreciate that sort of language.” He brings the trembling man’s face close to his, staring into his pale eyes. I can hear Vittorio’s upset in the cadence of his words. When he gets emotional, his speech becomes more and more Italian, more passionate. Especially when we are making love together. Ach mein Gott!

Myron is flailing his arms, but it’s useless—about as useless as the tiny arms of the dinosaur we just saw. Myron’s no match against Vittorio’s strength, not when he’s been angered. More fool Myron for getting on Vittorio’s bad side—my lover is all that stands between him and my own ire.

“Also, you do not have knowledge of Doll’s physical attributes that you shall make such a statement. And if I ever learn that you have such knowledge, I will not be responsible for what I do to you!”

Myron’s squeaking now, and I fear he is in imminent danger of losing bladder control, which, while humorous, is not something that I wish to witness. Or smell.

“Don’t worry, I don’t want to see his dong, I swear it!” Vittorio releases his hold on Myron and he crashes to the ground. But not before I hear the rest of his statement—“Only yours.”

That does it! I’ve had enough of this addlepated Arschloch! Uttering a tremendous roar, my limbs stiffen as I prepare to pounce on Myron and trounce him to within an inch of his worthless life. I coil like a deadly spring, and then, I release myself at him, prepared to inflict serious damage, only to find my flight arrested by Vittorio, who has handily caught me up in his loving arms.

“No, no, Doll, no, no,” he chides me gently, covering my face with tender kisses in order to distract me from my direst of intentions. It succeeds as I succumb to his charms—as usual.

He continues to soothe me until I cease to tremble—from anger, anyway—and he sets me on my feet once more, keeping a protective arm about me.

Myron has backed himself against a tree. He stares at me with a most sullen expression.

I look lovingly up at my tall beauty. “I shall apologize,” I murmur, for I know he wishes no enmity between us, and I have no wish to upset him. He nods his affirmation and leans down to offer me his sweet lips. I kiss him and pat his soft cheek. His eyes glow, and I know he is pleased. Then, I take a step toward Myron, followed by another one. I put out my hand tentatively, in the way that one first approaches a wild animal one is unsure of, in order to engender its trust. His eyes are filled with nothing but suspicion.

“Bitte entschuldigen Sie,” I say clearly, loud enough for Vittorio to hear. Please accept my apologies. And then, I lower my voice to a level that only Myron can hear. “If you ever dare to look at Vittorio in that way, or any part of him, I shall slice yours off and use it for knackwurst. Verstehen Sie das?” He nods his frightened understanding. I smile and return to my love.

“Thank you, Doll,” he whispers and rewards me with a kiss.

I feel better now, having gotten that unpleasantness over with. Myron is muttering to himself, but we ignore him, wrapped up in one another, ‘til suddenly, we hear him exclaim, “Great googly moogly! My wand!”

He snaps his suspenders loudly, startling several birds from a nearby bush. They take flight in a frightened bevy as he begins to run—right into the quicksand!

Tempted by Her Trinity (MFMM)
Rhea Regale
In Shelf
$5.99
Tweets by
sirenbookstrand