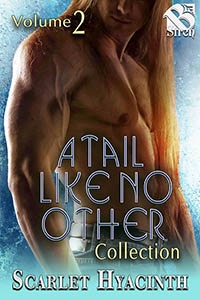 Prince Snow and His Snow King (MM)
Scarlet Hyacinth
In Shelf
$2.99
All Books In Cart
All Books In Bookshelf
Excerpt

Blaze. The name suited him. Well, both of them did—his given one and his nickname. He was small, almost tiny, or at least, he seemed so to me. Even so, I wouldn’t have called him weak or fragile. Power glittered in his eyes and had obediently come forward when he’d beckoned it. I had no illusions that I could have recovered this quickly without him. That damn stallion had thrown me pretty hard, and I might have actually broken my neck if not for my lingering shape-shifting abilities.

But his magic aside, I simply couldn’t get over Blaze’s beauty. His curls reminded me of loose, wild fire, flowing over his shoulders like gentle, soft waves of lava. I was drawn to him like a moth to the flame. And for that reason, even if he’d told me to stay in bed, I disobeyed. When he stepped out of the room, I already knew I would follow.

I gave Blaze a few minutes, since I didn’t want to make my improving condition too obvious or seem like a stalker. After that, I slid out of the bed and exited the room. Much to my surprise, the main area of the cottage was already far cleaner than it had been. I’d kind of expected Blaze to want to tidy up—he’d seemed embarrassed about the condition of his home earlier—so that wasn’t really what shocked me. It was the fact that he sat cross-legged on the ground, whispering soft incantations under his breath. Brooms and dust cloths danced through the room, taking care of the grime and dirt, leaving behind only spotless surfaces.

It wasn’t precisely an unusual sight for me. My parents weren’t witches, but some magical blood had existed in my father’s bloodline. His abilities had kind of flatlined when he’d been cursed, but their home was still filled with dancing broomsticks and other such items. It was that familiarity that struck me most, and the sudden desire I had to just take Blaze in my arms and show him my parents’ home, where he could be around as many animate items of furniture as he could find.

I shook off that longing just in time to dodge a broomstick that was quickly heading my way. Blaze didn’t seem to hear me, and an idea trickled into my mind. I could use this chance to study him a little better. He’d tied his hair back and had abandoned his red cloak somewhere, so I could finally get a clear look at his face. Oh, yes, I couldn’t waste this opportunity.

As silently as possible, I made my way through the room, thankful that Blaze had removed my boots earlier. My feet made no noise as I carefully walked toward Blaze. He was so absorbed in his casting that he didn’t feel me at all. It was actually quite amusing, because I had to engage in a dance of dodging the cleaning cloths and brooms to make sure Blaze wouldn’t detect me. My feline instincts allowed me to do so with ease, and finally, I stood straight in front of Blaze.

I knelt next to him and leaned in as close as possible. From this angle, I could tell that he had freckles, but then, I’d already noticed it earlier. His skin was fairer than that of a pixie, but with his complexion, every tiny adorable dot was more than visible. I wanted to kiss each and every one of those freckles, and take off his damn clothes to see if they extended on the rest of his body.

Blaze would fit so nicely in my arms. I would have bet money that he was a very passionate young man, and that guess stirred a million sinful images in my brain. I could already imagine it now, how his full lips would look like when stretched around my cock, or how his flesh would open up to me as I pushed my dick into his hole. He would be tight, but oh so willing, and he would cling to me with those soft hands that had earlier taken my pain away.

Under the circumstances, it came as no surprise that I couldn’t maintain my silent observation for long. Before I could stop myself or even think about what I was doing, I crossed the distance between us and pressed my lips to his.

Blaze immediately went rigid, his mouth unresponsive under mine. But he was only surprised, and I knew I could coax him into kissing me back. I licked over the seam of his lips, leisurely demanding entrance, slowly seducing him and casting my own little spell around him.

It would have worked, too. Blaze opened his mouth with a small gasp, and his shy tongue came to meet mine. But then, in enthusiasm with my achievement, I got too ambitious. I snuck my hand between our bodies and groped his crotch. He was hard, yes, but that didn’t work in my favor. Just as I was making plans as how to quicker disrobe him, Blaze tore his mouth away from mine. A hard punch struck me straight in the nose, sending me reeling back with shocking force.

I should have been able to avoid it, but I was too dazed by his taste, too intoxicated by his perfume. And so, pathetically, I fell, dripping blood all over Blaze’s newly clean floors.

My hands roamed his body, exploring every inch of skin they could reach. Red writhed under me, making small breathless noises which I swallowed greedily. Our cocks kissed just like our lips did, and the friction was both mind-numbingly pleasurable and frustratingly insufficient.

I tore my mouth away from Red’s when the need to breathe forced me to. As our gazes met, lust rose within me even hotter, brighter than ever before. He was so impossibly beautiful, like an innocently passionate wood nymph who lay there just waiting to be ravished. And because of that innocence and that purity, I found myself hesitating.

“Red,” I whispered, cupping his cheek gently. “Tell me if you’re not ready for this. I’m fine with waiting for a while longer. Just tell me now, because if we go any further, I don’t think I’ll be able to stop.”

Those words would have shattered the resilience of a man far stronger than me. It was like being handed the world on a silver platter, and I wasn’t selfless enough to refuse it. Even knowing that I hadn’t done anything to deserve it, I couldn’t deny myself, or him. But I had every plan to show him just how precious he was to me, over and over and over again.

With that in mind, I lowered my body over his and took his mouth once more. At first, I planned to be gentle with him, to guide him through a slow seduction that would show him just how much pleasure we could experience together. But my instincts guided me in a different direction.

For all of Red’s smiles and optimism, he was still raw inside. The pain of his guilt still flared brightly, and he hadn’t forgiven himself for what had happened. It was natural. The shame and remorse he had carried for so long wouldn’t disappear just like that. However, I had some fire of my own—the fire of my need for him—and through it, I would burn the shadows of his past to ashes. I would unleash my beast over his fears and make his burden my own. And I could do all this for one very simple reason.

I had fallen in love with him. This desire that threatened to scorch me alive went beyond the pheromones that identified the mate of a shape-shifter. I wasn’t sure how it had happened. Maybe I’d loved him from the very first moment I’d met his fearful dark eyes and felt his soft touch. Whatever the case, those emotions guided me and told me what Red needed most.

Our kiss became frantic, no, animalistic, almost savage. I bit down on his lower lip, so hard I drew blood, but he didn’t seem to mind. Instead, he arched his back, rubbing his hard cock against me.

I chuckled darkly into our lip-lock and slipped my hand between our bodies, reaching for his dick. I clutched his erection in my fist, squeezing the base almost ruthlessly. Breaking our kiss, I whispered, “Tsk, tsk, Little Red. Not so fast. This is mine. I’m going to eat you up.”

Red released another one of his trademark noises that sounded like a cross between a moan, a croak, and my name. It only made me even more aroused, hungrier for him. I wished I could go on kissing him, but sadly, I only had one mouth, and I wanted to use it on the numerous parts of him I hadn’t gotten the chance to taste yet.

Following that desire, I licked down his neck, suckling on his Adam’s apple and the junction of his throat until I was sure I left behind a very distinctive sign of my possession. If my slight aggression hurt Red, he didn’t show it. In fact, he went wild beneath me, spluttering and groaning, begging for more—not with words, but definitely with his body.

I gladly gave him what he wanted. Continuing my exploration of his slim form, I suckled on his right nipple, occasionally biting down while I harshly pinched the left one. I realized with glee that the tiny nubs seemed to be an erogenous zone for my mate, because impossibly, Red became even louder, his thrashing growing even more frantic. The scent of his rising lust surrounded me, stronger and more potent than any aphrodisiac in existence. As much as I wanted to map every single part of him, I found myself releasing his nipple with a wet pop.

Red keened in protest, but the sound melted into a choked gasp when I dove in for the gold and took his cock in my mouth. The sweet and spicy flavor of his pre-cum assaulted my taste buds, and I groaned around the shaft in my mouth.

The first thing I had to conclude was that my mate was perfect and delicious all over. Here, his taste and scent were sharper, tinged with the distinctive hint of sex—but they were still so very him, that herbal aroma that hid a fiery core. His slender, hard prick fit perfectly in my mouth—and I had to say that for all his smallish build, he was quite generously endowed. I bobbed my head up and down his prick, using every trick in my arsenal to increase his pleasure. I ached to taste his cum, and I planned to make it impossible for Red to keep it from me.

For his part, my mate seemed to have no intentions to hold his climax in check. He threaded his hands through my hair, trying to guide me to move faster. I was controlling this encounter, but I allowed him to do what he wanted, specifically because I was impossibly close to coming, too—and I hadn’t even touched myself.