Waiting on Them (MFM)

Kale Dawson and Marc Peters have known each other since they were kids. They’ve grown up together, worked together... nothing has ever come between them.

Jolie Green is the down on her luck waitress who has stirred the town of Little Point into a spin. Single men are plentiful in Little Point and they all have their eye on Jolie, including Kale and Marc.

Only Jolie finds herself kinda smitten with both men, she can't choose between them...and maybe she won't have to....

Waiting on Them (MFM)

The sight of Jolie’s ass moving up and down on top of Kale was deeply arousing. Marc watched as his friend pumped his length in and out of Jolie’s tight little quim, watched and sighed. He wanted to be in her too, wanted to feel her around him.

He stroked himself, pumping his length up and down, as he tried to decide whether or not Jolie would be willing to take them both. Her head was thrown back right now, her ass jiggling as she gave little pants of pleasure. Kale had his hands either side of her hips and was moving her up and down with a forcefulness that Jolie seemed to love.

Unable to himself, Marc knelt down on the very end of the bed, in between Kale’s outstretched legs, and grasped each ass cheek. He squeezed them in time with Kale’s thrusts, lifting his hands a little higher each time.

Jolie must have known what he planned, because after a moment she shifted position, moving herself forward so that her body was draped over Kale and her lovely ass high in the air. She was open to him now. Marc could see her little pucker and he wasted no time sucking one of his fingers and going straight for it.

He was careful, gentle, but in no time at all he penetrated Jolie. She moaned with pleasure and thrust her ass back with each stroke.

Her whispered words were music to Marc’s ears, but he knew that he couldn’t have her just yet. He was big and her ass was tiny. She needed to be ready. He flattened himself down on the bed and licked her ass. From the very top all the way to her pucker, Marc licked and laved it. He wanted her nice and moist, nice and wet.

She was already coated from her own juices and that along with his tongue was more than enough. It took only a few minutes and then Marc was back in position, ready to fill her up completely.

“Do you want this, Jolie?” he asked, needing to be sure.

She swiveled her head, caught his gaze and nodded. “Yes! I do!” she gasped. “Fill me completely, Marc.”

He needed no further urging. Carefully, sweat beading on his brow, Marc guided his cock towards Jolie’s ass. When his cock-head nudged the opening, a shiver of pleasure shot through him.

Kale laughed as he threaded his fingers in her hair. “Give our girl what she wants.” 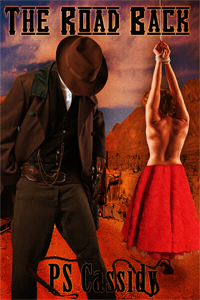