A Treasure For Sara

Set in the Yukon before gold is discovered in the territory, a strong willed woman is pitted against a quiet, reserved giant of a man. Sara McGuiness, an efficient, loquacious spinster flees her aunt’s Philadelphia home where she is little more than a servant, accepting her prospector father’s invitation to come to the Yukon Territory and accept the treasure he’s found for her. However, unknown to Sara, her father is in the cabin of a reticent, but tormented mountain man called Bear, who wants solitude as he serves a self-imposed sentence for causing the deaths of his wife and child.

When Bear brings Sara to his cabin, passion explodes between them. They are forced to winter together fighting their desires and the dangerous elements of the Northwest. As they survive the perils of the wilderness, they discover an enduring love for each other and Sara’s treasure. 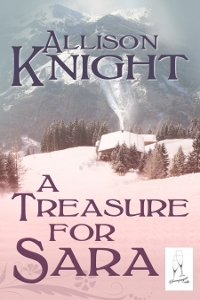 A Treasure For Sara

“You Sara Margaret McGuiness?” The giant’s voice boomed at her.

“What did you say, s-sir?” She stumbled over the word. This man had the biggest chest she had ever seen as she tracked the buttons of a flannel shirt upward—and a voice to match. She couldn’t help but stare at his face. A beard of curly hair, so dark it resembled the coal dust in her aunt’s bin, covered the lower half of his face and a darker mustache obliterated his mouth. She couldn’t tell whether he was frowning or smiling. However, his steel gray eyes caught her attention. For a second, she wondered if they could see into her soul.

“Your pa Patrick McGuiness?” he asked.

“Come on,” he said and grabbed her arm.

“Whatcha got, Bear?” someone shouted.

Bear? They called this man Bear? Well, no wonder. That name surely fit. “I beg your pardon,” she tugged against him, trying to dislodge her arm. From nowhere, a rush of chilled air touched her and she shivered. Bewildered, she looked around, and wondered what caused such a reaction.

“Come on.” He snatched her by the wrist. Again, when he touched the skin between her long sleeve and the edge of her short kid glove, she tingled. What was happening to her?

“Let go of me!” She hadn’t rushed away from Philadelphia and the problems there to be dragged away by some titan of a man.

Once again, she glanced at the growing crowd and looked for her father. He wasn’t there.

“Time to go. Haven’t got all day,” the giant said.

Go with him? Oh, good heavens! He couldn’t be serious.