Spending a friend's stag weekend in a posh country house in Cornwall, Chris finds himself undertaking an unusual challenge in a game of Spin The Bottle. He has to run across the beach wearing nothing but a towel, and pay a forfeit if he’s caught. But what he doesn't know is that the man who is chasing him wants him to fail – so he can initiate Chris into the delights of man love...

A Birthday Present by Ruth Ramsden

To be bound and helpless, to be totally at my mercy is his fantasy and tonight I am going to make sure he lives it to the full. After all, a birthday comes but once a year, but only coming once is not what I intend for him!

The Anniversary Gift by Garland

Huston Blake writes erotica for a living so why is his own sex life so unsatisfactory? He thinks he knows the answer: routine kills everything. So he devises a way of spicing things up a bit. Threesomes and maybe even foursomes, but long term boyfriend, Sug, is horrified at the idea. The question is, will Huston be able to change his mind?

Slash And Burn by Michael Bracken

Slash is an ace skate-boarder who wants to turn pro, but he can’t attract the attention of a sponsor. Then one evening while Slash and his boyfriend are skateboarding in the mall, Slash thwarts a robbery with a very slick skateboard manoeuvre. The guys celebrate his success with a passionate night. Next day, they discover everything has changed. Where once their future seemed uncertain, now they are a huge success – and their partnership is cemented – in more ways than one.

The Collaring by Penelope Friday

Matt is my sub, I am his master, and tonight is a very special night. It is the night we will make a very public commitment to each other. Matt must prove his love for me, and I will prove mine for him in front of a willing audience. Only then will the collaring ceremony be complete.

‘Get up,’ he says, and I rise slowly to my feet. Before I can react, Reuben reaches for the knot of my towel and yanks it off me. Suddenly, I’m standing stark naked but for my trainers in front of three blokes, two of whom I’ve never met before tonight. Instinctively, I cup my hands over my crown jewels, but Reuben’s having none of that and orders me to put my hands on my head.
Now, I feel as though I’m on display, and that thought causes something utterly unexpected to happen. My cock begins to rise, twitching and thickening as the others take in the sight of my firm arse and chest with its light sprinkling of blond hair. Alan can’t seem to stop looking at my swelling erection. I’ve always known I’m rather bigger than average, but his eyes are bugging out of his head as he registers my true dimensions.
Reuben is twisting the towel between his hands, forming it into a thin rope, and I wonder whether he’s intending to whip me with it. Isn’t that what public schoolboys have always done for fun, lash each other with wet towels? And why is the thought of it causing a dark, hot stream of desire to course through my veins?
He seems to have other ideas, though. Turning to the other two, he tells them to go back to the house and run a cold bath in the first-floor bathroom, then find as much ice as they can in the kitchen and dump it in the bath. So he’s going to use the towel to bind my wrists, then drag me up the cliff and throw me into the bath. Maybe the size of my cock intimidates him, and he’s going to try to cut it down to size. When it’s all shrivelled up by the ice, he’ll invite the others in to laugh at me and …
Fuck, even the thought of being humiliated in that way is turning me on. What am I turning into? I watch Alan and Jeff pick their way through the pebbles and on to the smooth stretch of sand that leads up to the cliff path. Knowing what’s coming next, I put my arms out in front of myself, hands clasped, inviting Reuben to fasten them together.
He looks at me for a long moment, then relaxes visibly. ‘Thank Christ for that. I thought I’d never get rid of them.’
‘Just what’s going on here?’ I ask. ‘If you’re going to tie me up and throw me in that ice bath, let’s just get it over with, shall we?’
He laughs so hard at that I think he’s in danger of pulling a stomach muscle. ‘Throw you in the bath? Is that what you think’s going to happen?’ He must be able to read the anguish in my expression, because he says, ‘Look, that was only an excuse to get those two out of here.’
Now I’m totally confused. And still hard. My cock continues to strain upwards even as Reuben wraps his fist round it.
‘Don’t you realise, Chris, I’ve wanted you since the moment you got in my car? I just had to find some way of getting you on your own.’
‘So you bring me down to the beach, make me run a mile and then strip me bare ...’ I want to object further, but I can’t. Reuben’s grip has changed to a soft back-and-forth motion, slowly wanking me. And though I’ve always thought I never had any interest in men, I’m starting to realise I was wrong. This feels so good. Unlike most of the girls I’ve been with, who never squeeze my cock quite hard enough out of some misplaced fear they might break it, Reuben is applying just the right amount of pressure. When his thumb strums insistently over the spot just below the head, my breath catches in my throat. That’s when he knows he’s got me hooked.
‘Feels great, doesn’t it, Chris?’ he murmurs. ‘But it’ll feel even better when my mouth takes over.’ 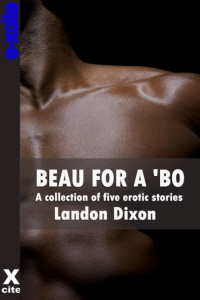