Crista McGuire has had a crush on Dallas Wolfe since she was a teenager. After being turned down by Dallas when she was eighteen, she moves on with her life. She goes to college and comes home to live her life away from him. After delivering a message for her brother, she finds herself up against him for the first time in years.

Dallas is mad as hell. Not only has she hidden herself away from him, but she managed to miss all the family get-togethers that he had been invited to as well. He can’t believe how much she’s changed both physically and in her personality—or how much he still wants her. When her life is threatened, Dallas comes to the rescue. Can she let go of her anger and embrace her submissive tendencies in order to achieve true happiness?

Cristal looked around the reception area. Her brother, Ryan, married his high school sweetheart, Cara, a month after Cristal’s graduation. She was the maid of honor while Dallas Wolfe, her brother’s best friend, was the best man. Her eyes had lovingly followed Dallas through most of the wedding and reception. He’d looked so good in his tuxedo. Before she’d realized it, he was standing in front of her, holding out his hand, and was leading her out onto the dance floor.

She let her body meld into his as he swayed with her slowly. At the end of the song, he led her to an empty room. She’d hoped that the wedding had inspired him, but after he’d closed the door, he leaned against it with an almost-angry expression on his face.

“Cristal, I want you to know that I think you’re a special girl. If I had a sister, I’d want her to be just like you.”

That put her back up because she didn’t think of him as a brother. She thought of him as a man, a man who could make all her innocent dreams come true. “I’m not your sister, Dallas. I’m a single woman.”

He laughed at her. “You’re just a little girl in a woman’s body. You have no idea of what a man really wants from a woman—or what I need from one.” He angrily walked to stand in front of her, his big hands brushing the tears off of her cheeks. “You’ve got forever in your eyes, Cristal McGuire.” He brushed a soft, chaste kiss against the corner of her mouth. “I’m not a forever kind of man.”

He stood back angrily, his hands clenched tightly into fists at his sides. “Bullshit! You’ve got a schoolgirl crush.”

His silver eyes looked at her wildly before a certain calm settled over him. “You aren’t woman enough for me. I won’t tell you again. Stay the hell away from me, Cristal.”

Her aqua-colored eyes watched him leave as her heart shattered into a billion pieces at her feet. She didn’t return to the wedding reception. And she promised herself that she wouldn’t come near him ever again. She would get over him. She could be happy without him in her life. She hoped.

He shook as he stepped away from her. That had been the hardest damned thing he’d ever done. Just yesterday, Ry had had a little discussion with him. And it hadn’t been the first one. He’d been told that if their relationship had ever meant anything to him, he’d let Cristal go. She’d been too young, Ry insisted, to even think of settling down with him. Dallas also didn’t have the best track record for long-term relationships, and Ry didn’t want to see his baby sister broken hearted. Or worse yet, broken hearted and pregnant.

Seven years later, she and her friends were going to a bar called Hell’s Place. Cristal had never been there, but it was the talk of the county. She and a few of her coworkers were going there to blow off some steam before they started on another big project for the state of Missouri.

Most of her coworkers were male and a little older than she was, but they treated her like the little sister they’d never had. There was only one coworker that she had any problems with, and lucky for her, he hadn’t planned on coming with them.

There were a few patrons sitting at tables when she walked into the bar. Walking up to the bar, she motioned for the bartender. Lord, he was hot, too. Six feet of hard muscles. She bet he’d suit up just fine.

She plastered on her best business smile as he sauntered over to her. She felt his blue eyes trace her body from head to toe and back again. “How can I help you, ma’am?” She didn’t know where he got that southern drawl from, but it made her insides melt.

“Can I please get a sloe screw?” she replied with a smile.

“I’m sure I could help you out with that!” The bartender leaned one muscled arm onto the bar and reached for her with the other.

She stepped back before he could make contact. She didn’t mind looking at the merchandise or even flirting a bit, but she wasn’t letting just anyone touch her. “I’m sure you could, too, in some things, but I was talking about the drink. I’ll be punished if my friends don’t see something cool and liquidy in my hand.”

“Do I pay you to flirt, McCajah?” She steeled herself as she heard his voice, a rough bass sound that had always sent shivers straight to her clit. What the hell was Dallas Wolfe doing here?

“He was just being friendly.” She turned her body so that she could halfway see him. Oh damn, why couldn’t he have gotten old and ugly? Dammit, he looked better now than he had before. Faded denim jeans encased his hard, muscular legs. “Hell’s Place” was emblazoned across the black T-shirt that was molded to his chest. His long, dark brown hair was pulled into a braid down his back. Some things never changed.

Silver eyes narrowed onto her. “Cristal?”

She didn’t look like the girl she’d once been. Before she’d been reed thin and willowy, but now she had lush curves and an ass that made him instantly hard. Her jeans hugged that sweet ass almost as well as the collared shirt she wore cupped her tits. She was his best friend’s kid sister. She was his best friend’s kid sister—he had to remember that!

“Hi, Dallas.” She stuck her hands out in front of her as if to ward him off. “I didn’t know you would be here. I’m sorry. I’ll go.” She gave a smile to the bartender with a quick “see you around,” and she was walking toward the door. He watched the gentle sway of her ass with each step she took.

What the hell happened? She’d been having a great dream of having him in her mouth and his fingers on her clit, and he woke her up! Damn him!

She scooted back over to her side of the bed. “Yeah, it was okay.”

“Just okay? You were rubbing off on my leg, and it was only okay?”

“What?” His grin, sexy and wicked, told her that he wasn’t just teasing her. She’d been so caught up in the dream that she’d been…Oh damn! What else could go wrong?

“Your lover must not give you what you need, sweetness.” His hand reached out and tweaked her still hard nipple. She gasped as the sensation went straight to her clit. “Maybe you need a better man.”

“BOB is fine. We get along great. He gets me off then shuts the hell up.” His finger twisted her nipple a little rougher.

“Dallas, you’re so conceited! I never said I was dreaming about you. You were just a prop, so to speak, to help me get off.”

His lips thinned into a tight line. “Is that so? Let’s see if I can change your mind about that.”

“But you said I wasn’t woman enough to interest you,” she reminded him yet again.

“I said that seven fucking years ago. Dammit, I was trying to keep you away.”

“Hell, you got what you wanted. I stayed away.”

“You think I got what I wanted?” He moved so that she was under him. “I wanted to be buried inside your body. I wanted to fuck you so bad that I had a constant hard-on.” He pulled her hands over her head and pinned them there with one of his hands. “I still do.” His lips crashed down onto hers, absorbing any comment that she had planned to make. The hard-on in question was huge against her.

She moaned against his mouth, but she didn’t know if it was in protest or welcome. He was trying to take over for her, and she didn’t want to give up control to him, but his mouth felt like heaven as his lips toyed with hers. “Open your mouth, CC.” His teeth nipped her lower lip. “Let me in.”

Her brain died. There was no other reason that she opened to him, allowed him to push his way into her mouth, and let him control her that way, but she did. He slid his legs between hers as he continued to slide in and out of her mouth as he pushed his cock against her cunt. With each thrust, she felt her arousal notch a little higher.

Technically, she wasn’t a virgin anymore. She and her little purple friend had taken care of that after he’d warned her away from him. However, she’d never had a real lover, and there was no way in hell that she was going to tell Dallas that. Instead, she enjoyed the feelings he was fueling in her body.

“Keep your hands right there,” he directed before he released her arms. He sat up between her legs, and his cock had come out of the waistband of his boxers.

She wanted to touch him, wanted to feel his hard cock in her hand, taste him in her mouth, and she reached for him but was brought up short when he got off the bed.

“I told you not to move your hands. Put them above your head and leave them.” When she did as he ordered without talking, he shook his head. “I want you to say ‘yes, sir’ or ‘yes, Dallas’ when I give you an order.”

“Yes, Dallas.” She arched her body up, teasing him with it. She smiled when she heard him curse under his breath. All the pent up longing she’d had over the last ten years came flooding through her. She forgot all the reasons she needed to distance herself from him and focused on the only man she’d ever wanted. “I need you, Dallas.”

Fuck, his cock got even harder. He removed his boxers. He hated sleeping in them anyway—he’d only done it for her. He slid his hand down his cock, stroking it while he watched her gasp and spread her legs for him. He needed to be buried in her bare pussy, needed to feel her tight walls milking his cock.

He lay down beside her on the bed. “Don’t move, CC,” he ordered as he slid his hand down from her neck to her thighs and back again. “Do you know how sexy your breasts are? I like your butterflies,” he said before leaning down to lick a firmly beaded nipple. He sucked the tight peak between his teeth and nipped her gently before turning to the other one. His mouth moved down her body, kissing and sucking at her flesh until he came to her bare cunt. 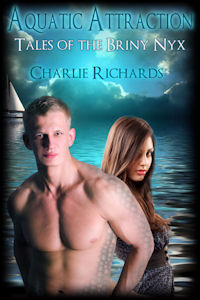