Birth of a Nation (LoveXtreme)

Ma Crowther has a penchant for vengeance. She wants her boys back and will do anything to get them. Targeting the Hawkriggs, she begins a deadly game of cat and mouse with tragic consequences for Barry Hawkrigg, who's finally found his mates.

Craig, aka El Corazon, has a vision and knows it's too late for the Hawkrigg alpha as Ma's anger descends  on them all.  Who will she enlist to help in her quest?  Meanwhile, Carter Ruin's decided to write the history of the shifters. He wants to document everything, to make sense of why Amos and his pack are being victimized.

The results are interesting as they discover ancient scrolls dating back to the very first shifter and begin to understand what the so-called ruling packs have to lose.

Hartland Valley isn't just a sanctuary now but the birth of a nation. Blue Platoon are going to have a tough time protecting it.

Birth of a Nation (LoveXtreme)

Barry hopped back out of the truck and ran to his father, hugging him tightly. Cord swallowed the lump in his throat as he saw the love between them. He’d felt the same for his brother. That bond of family. Then he smiled, thinking of what waited him at Hotel Hartland, the tongue in cheek nickname for his new home. Two mates. Colin and Carter. True mates. And he vowed he’d do whatever it took to protect and nurture their relationship.

Glancing around the farmyard, he saw the embedded nails and shrapnel in the stone walls, evidence of what had occurred here. A homemade bomb, attached to a suicide vest, made by Howard Hartland, and detonated by Ma Crowther or her boys. Yeah. Albert couldn’t afford to step down just yet. They had a monster on the loose. Ma Crowther was dangerous, and on the run. She’d be wanting revenge right about now, knowing her sons and mate were locked away.

He turned to Michael. “Are the Crowther boys still secure?” he asked.

Michael nodded. “Yeah. They aren’t getting out anytime soon,” he replied, not needing any further explanation. “Someone may rat us out, but we’ve managed to keep their location a secret so far. It depends if Ma Crowther engages with the rest of our community, which she’s bound to do. She’ll beat the location out of someone, sooner or later.”

“Let’s hope we keep it a secret for a while longer,” Cord said grimly. He rubbed his knee, which ached in the cold. His prosthetic limb did a fine job of keeping balance, but his natural joint still hurt like a bitch sometimes. “I have the feeling we won’t have long to wait until Ma comes sniffing around again, though.”

“I hope she does,” Michael replied in the same tone. “Then I can tear her apart, piece by piece. She’s a dangerous bitch who needs putting away.”

Cord shook his hand. “Keep alert. She’ll turn up. She won’t be able to keep away.”

“We’ll be ready,” he acknowledged.

Cord turned to the truck, stepping up into the driver’s seat, after checking the livestock were okay. The kittens mewed a little in their box, and he eyed them warily. Wolf shifters and felines didn’t generally mix well, but Barry seemed to have the knack. He dared to put his hand out, and the mama cat hissed warningly. Yeah. That’s what he’d thought. Pussies! He sneered at the feline, then started the truck, letting it turn over.

Barry gave his dad a final hug, then Michael, before clambering up again.

“Let’s roll, cowboy,” he said, his smile a little watery.

“You can stay, you know, if you feel you need to,” Cord reminded him.

Barry shook his head. “I found my mates,” he replied. “Joe and Cormack. I need to be with them. And I can’t stay here. Not yet. It’s too soon.” His voice broke, and his eyes teared up again.

“Running away isn’t a permanent solution,” Cord said gently. “And the only way you’ll know how strong you are is to face up to the fuckers who are trying to bring you down.”

“What if Ma Crowther shows up, all snarly?” Barry asked, wide-eyed. “I’m not strong enough to take her on.”

“Dude, you’re stronger than you think,” Cord retorted firmly. “And don’t let anyone tell you different. Your mates are mobile. They’ll move wherever you need to be. Don’t use them as a way of ignoring what you know you have to do.”

“If only I was big and strong,” Barry sighed, waving as the truck rolled into motion.

“If only you had a big, strong mate the size of, say Cormack, who could be your alpha,” Cord shot back, ignoring Barry’s attempts at putting himself down. “Being smart and resourceful counts for something, too. Not everyone is built like him, and not all alphas rely on brawn. You complement each other. That’s what mates do.”

Barry was quiet for a while, rousing when the kittens started yowling for attention.

“I know I need to come home sometime,” he said quietly, plucking one kitten from the box and stroking it gently. It purred like a mini cement mixer. “I’ll know when I’m ready.”

Cord reached out and squeezed his shoulder. “I know, honey,” he replied gently. “And when you’re ready, you can punch that cranky old bitch right in the nose. Don’t let the likes of the Crowthers stop you from being you. Trust me, there’s a whole line of people wanting to take a shot at that whole family.”

Barry giggled suddenly when Cord yelped. “Kitty doesn’t like you,” he chortled infectiously.

Cord removed the kitten’s claws from his thumb, and glared at the tiny cat warningly. “The feeling’s entirely mutual,” he said, turning onto the back road, and heading north.

“Are you sure you want me to claim you?” he asked nervously.

“Baby, we need you to claim us,” Carter begged, breathing hard. “Please.” He closed his eyes, pumping his hand firmly along his dick, then came a second later.

“I want you to come on Carter,” Colin said to Cord, who oozed sex appeal. His legs were strong and lithe, the shorter length of his damaged one not detracting one bit from his gorgeousness. Cord sent him a scorching look, then knelt carefully beside Carter, jacking off until he spurted over Carter’s heaving torso.

Carter gave a startled gasp, then shuddered. “Take what you want, darling,” he said urgently. “Claim me, baby.”

Colin leaned closer, his tongue darting out to collect creamy fluid, enjoying the flavor. He lapped avidly, inhaling Carter’s sweet scent, his cock throbbing with want. Dipping lower, he buried his nose in the thick thatch above Carter’s jutting groin, then licked a trail along the semi-plump rod before encasing it between his warm lips.

Colin wanted to cry at the sincerity in Cord’s tone. He’d never been beautiful before. Only an ugly freak to his family. Or a useful vessel for Howard. Then he’d just been abandoned and left to rot. He’d prayed for someone to find him, then made his escape, literally clawing his way out of the shack where he’d been held prisoner, trekking for days to get here, following some half-forgotten map in his mind. He’d come home. And known peace in Carter and Cord’s arms, letting their strength leach into his soul, calming him. Soothing him. Healing him.

Cord breathed in sharply, then Colin felt his hands, so strong, yet so gentle, cupping his ass. His jeans were tugged down, then off. “What’s your safe word?” Cord asked gruffly.

“If you don’t feel safe, or you’re uncomfortable in any way, and want me to stop, use a safe word, and I’ll stop. You could use traffic lights if you like. Red for stop. Amber for pause. Green for hell, yeah, let’s go!”

Colin giggled at that, despite his nerves. “Okay,” he replied eagerly. “Green, green, green.”

Cord chuckled along with Carter, and peeled Colin’s underwear down, exposing his bare ass. He tugged them all the way off, stroking Colin’s butt gently. “You have the cutest tush,” Cord said approvingly. “Round like a peach, with this little crease right along the middle.” He stroked a finger along Colin’s crack, light as a feather, causing Colin to shudder with growing excitement. His pulse pounded, but not in fear. Anticipation stirred along his veins, and he swallowed Carter’s cock, bobbing up and down on the succulent meat.

“His mouth is doing crazy things to my brain,” Carter gasped out, arching off the bed as Colin began sucking him off. “Colin, my love, you’re learning fast.”

Colin giggled at that, enjoying himself. “I love cock.” He laughed. “Especially yours. I’ll try Cord’s later, compare notes.”

They laughed again. “Can’t wait,” Cord husked, probing gently at Colin’s hole. He grabbed lube, smearing the stuff on hands, cock, and around Colin’s quivering rosebud, then pushed a finger inside Colin, to the first knuckle.

Colin groaned, pushing against the invader, enjoying the gentle stimulation. Cord’s touch was butter soft, gentle and smooth, not forcing the issue. And Colin knew, then, that these were his true mates. How could they be anything else? His mind had been so clouded, so tortured by what Howard had done, that he’d been unable to pierce the fog of agony, conflicted and doubting his instincts.

He whimpered, eyes closed, feeling the inexorable push and pull of that tormenting finger, moving deeper in minute amounts, so carefully he thought he’d faint with wanting. “Faster, please,” he pleaded. “I need more.”

Cord complied, adding a second finger, then scissoring them to stretch Colin’s needy chute. He didn’t rush, taking his time to seduce Colin’s ass, preparing him in a way that gave pleasure, and very little pain.

“Green, green, green.” Colin sighed blissfully around Carter’s cock, nearly choking when his mate came, spurting hard and lashing the back of Colin’s throat. He swallowed, drinking down the tasty cream, then moved forward, lying atop Carter, and kissing him hungrily. Their cocks rubbed together sensuously, Cord stretching Colin further by introducing a third finger, which had Colin arching his back, whimpering with need.

Colin grunted, tensing slightly, but felt nothing but pleasure as he was breached. Carter kissed him, his gentle touch filling Colin with calm, even as he pushed back against Cord’s encroaching dick.

“So good,” Colin whispered against Carter’s moist lips, angling his head to take more of his lover’s sweetness. “I love you, Carter,” he said, knowing it was true. 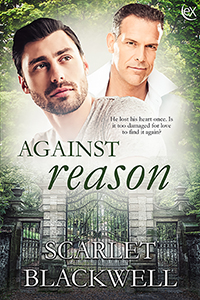 Against Reason
Scarlet Blackwell
In Shelf
$4.99