by Wanda A. Wallace

Harriet is a blacksmith and holds the town record in arm wrestling—hardly traits common in women to be wooed. Yet Harry, a mountain of a man travelling through town, feels a spark at the first sight of the remarkable woman. She pounds iron better than any man, fixes his heavy wagon's broken axle with ease, and, as if that's not enough, prevails in a skirmish with four wanted men intent on robbing them. With his share of the bounty money, Harry plans to lay down roots in Harriet's town and win her heart. 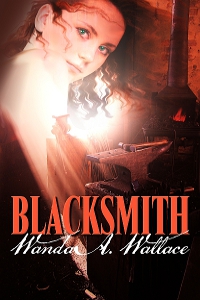 by Wanda A. Wallace

“Buckets! We need buckets!” The call echoed up and down the streets as people ran down the boardwalk, then someone dashed into Mabel’s, shouting. “Fire at Harriet’s house. Grab a bucket and help out.”

Harriet sprang to her feet, as did Harry. Wearing dress shoes slowed Harriet a bit, so she took them off and lit out like lightning, leaving Harry to try to keep up. When she arrived at the house, relief filled her. While smoke and steam still curled upward, the flames were already gone. A bit of damage had been done, but not too much.

Harriet picked up an unused bucket and doused the burnt areas. She wanted no ember burning out of sight, igniting again. She knew fire. It was that thought which inspired her next action. She studied all in attendance, spotting Elmer and then Thaddeus. Something about the younger man’s face spelled guilt. She caught Elmer’s eye, and looked at him hard, conveying her well founded suspicions. Elmer tried to look nonchalant, but she sensed he was anything but.

She elbowed her way to Elmer’s side and spoke in a low voice only he could hear. “You keep that son of yours off my property.” Her tone was even and stern. She glared at him. “If I ever see Thaddeus anywhere around here again, I promise I will make accusations loudly and publicly. You know full well no one around here will doubt your son’s hand in what happened here today.” Though Harriet had used a voice just louder than a whisper so as not to be heard by others, Elmer still put up a low-voice protest.

“Are you suggesting my son set the fire? That’s outrageous. How dare you make such an accusation? I should report you to the law.”

“But you won’t,” Harriet said. “You know as well as I do creating such a scene would accomplish little but give the entire town a reminder of how they feel about your son. Everyone dreads his arrival to town each Sunday. I see it in their faces—even the parson can’t hide it. And as you may have noticed, I did not make any public accusation. I spoke privately, to you and you alone. I want you to keep your son off my property. That is my right.”

Harriet knew he didn’t like it—she read resentment in his face. But there wasn’t much he could say because they both knew the truth of it, as did others, many of whom witnessed her quiet discussion with him. Few would not guess what had happened. Once they’d had some time to talk about it, then everyone would know.

Her gaze caught Mabel’s. Her mother’s friend shifted her eyes toward Thaddeus and back to Harriet. She’d already figured it out. 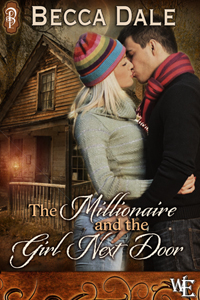 The Millionaire and the Girl Next Door
Becca Dale
In Shelf
$3.99