The power of three…

Nothing in Simon Sanders's life could be called normal. Born of two bear-shifting men, he’s had to grow up fast, but for once, Simon feels all is right when he senses Taner Cox is his mate. Taner is everything Simon has waited for, and he’s anxious to claim him.

Unfortunately, wolf-shifter Mannix Rhodes feels the urge to claim a mate, too. The feud between the two men is long running and potentially deadly when they realize they want the same man. Mannix hasn’t ever backed down from a challenge, and the claiming of Taner is no different.

When Taner Cox finds himself trapped between two powerful alphas, Taner decides he wants both. Determined to make his dreams of a loving ménage come true, he gives Simon and Mannix an ultimatum to get along or he’s gone.

Will they learn to work together to claim their mate, or will they allow an ages-old feud to destroy their chance at happiness?

“So you finally got your own place?” He’d talked about it on one of their dates.

“I did.” Simon’s ice-blue eyes seemed to pin Taner where he stood. “Want to see it?”

Before he could answer, Mannix stepped up to them. “Don’t worry, I’ve got it.” He slipped his hand onto the strap of Taner’s backpack. Simon growled and tightened his grip on the other strap.

Let the tug-of-war begin, Taner thought wryly. To circumvent a snarling match, Taner grabbed his backpack and moved well out of the reach of both men. “I’ll carry it myself.” Before they could argue with him or amongst themselves, Taner put the pack on his back and ended yet another source of debate between them. Everything, even doing something nice for someone else, became a competition.

“Why don’t you go find something to do, like maybe comb your hair?” Simon’s voice was perfectly polite while what he said wasn’t.

Mannix’s hair was a mix of sandy blond and light brown. He wore it longish and shaggy so that it fringed across his hunter-green eyes. He hadn’t shaved, but it looked more planned than casual. The light dusting of brown and blond facial hair made him seem a little more animal and less man. He wore a formfitting green T-shirt and tight, faded jeans that cupped his cock like a lover’s hand.

“I am doing something, Simon Says Go Fuck Yourself. I’m picking up my date.” Mannix shifted his attention from Simon to Taner. “You ready to go?”

The upper right edge of Simon’s lip twisted into a snarl.

Taner took a deep breath, waiting for the inevitable explosion, but the dean walked by and whatever the two men were fixing to get into, they changed their minds in a hurry. From talking with both of them during their dates, Taner discovered that their fathers would tan their hides if they got expelled from school. For two guys who seemed to take delight in tormenting one another, they had a deep respect for their fathers and for the authority figures at the school. That fact had surprised Taner since most aggressive alpha men seemed to have little respect for anyone. Not these two. Simon and Mannix were courteous to all members of the faculty, and it wasn’t just a façade. They really did like them, and they seemed to give their opinions a lot of weight. Maybe the faculty knew their fathers personally.

As soon as the dean turned the corner at the far end of the hall, Simon and Mannix once again eyed each other, but some of the heat between them had cooled.

“I’m ready.” Taner wanted a simple night out and then a good night’s sleep. This weekend was going to be used for nothing but studying. No matter what the two men or even his own hungry libido had in mind, Taner was determined to hit the books and only the books.

Mannix grinned like he’d won, and Simon frowned, clearly concerned that he was slipping in the rankings.

“I went on two dates with you,” Taner said, nodding to Simon. “I’m now going on my second date with Mannix.”

Again, Mannix grinned. He had a devastating smile that was at once both that of a little boy and one that a well-experienced man would show. In all respects, both Simon and Mannix were right on the cusp of full-fledged adulthood. Sure, they were big guys, both over six feet tall and two hundred pounds, but they weren’t fully mature. It was almost as if that was right there in front of them, waiting for them to take the last step and reach that part of their lives. Taner wasn’t sure when that moment had happened for him, but he considered himself a lot more mature than the two men who pursued him so relentlessly.

“Let’s go.” Mannix slipped the backpack off Taner and hefted it over his strong shoulder. “I was thinking we could start out at Mick’s and then see where the night takes us.”

Taner nodded, but he knew what Mannix was saying wasn’t really meant for him. It was more about grinding Simon’s face in the fact that he’d lost out. Mannix only compounded Taner’s belief when he possessively slipped his arm around him. Taner was prepared to let that go, but then Mannix nuzzled his nose to the top of Taner’s head, smelling his hair and then kissing the very top of the silken strands.

“Okay, that’s it.” Taner extricated himself from Mannix. “I’m sick and tired of this. Give me my backpack.”

Mannix stood in the center of the hall, clearly baffled by Taner’s abrupt change of heart. For a split second, Taner had the warped idea that he was going to run off with his books so that Taner would have to follow him. Thankfully, Mannix wasn’t that juvenile. With a clearly reluctant frown, Mannix handed over the book bag. When their fingers touched, there was a strong flash of passion, but Taner deliberately ignored his longings. In that moment, he decided that he was going to get what he wanted or nothing at all.

Cupping Taner’s chin, lifting his beautiful face, Simon kissed him very softly. “We’re going to show you just how well we can share.”

After slipping the bottle of lube into Mannix’s hand, Simon pulled Taner against him. His body was almost completely hairless and so soft against the rough hair that covered Simon’s chest, groin, and legs. His cock ached, and pre-cum slicked the tip, which Taner discovered and smeared over the head of his prick with his thumb. Using the same motion Simon had used to slick up his ass—around and around—Taner teased Simon to the point he was ready to blow. To stop him, and to help Mannix, Simon grasped Taner’s perfect buttocks in his hands, lifting him up and spreading his legs around his hips.

Mannix stepped close, and even though he couldn’t see, Simon knew what he was doing by the way Taner clung to him. As soon as Mannix pressed his cock against Taner’s hole, Mannix’s eyes closed and Taner’s flew open along with his mouth.

“Do you trust us?” Simon asked, holding Taner’s buttocks parted for Mannix.

“Yes. But I—I—oh!” His voice rose and then trailed off into a soft sigh that conveyed Mannix had eased the first bit of his cock inside Taner’s ass.

As hungry as Simon was to feel that slick heat, he was more concerned about Taner’s pleasure than his own. He felt his primary duty was to his mate. At that precise moment, his gaze connected with Mannix’s, and he realized rather suddenly that just like Taner, Mannix would now and forever be his mate, too. What would they become when they finished their bonding? Would they need a nexus to twin them like their fathers had, or would it be different because they were different? Holy hell, what would they be if and when they shifted?

All the questions rushed through Simon in an instant. He almost staggered back under all the curiosities of what they would become. When he looked up, his gaze connected to Mannix’s again, and he saw the same things had probably crossed his mind as well.

“We’ll work everything out.” Mannix seemed to understand exactly what was going through Simon’s head. “I swear it.”

Simon nodded, and when Taner looked up at him, he saw a flash of the future in his eyes. The three of them together, bounding through the forest, their hearts and minds joined, and their bodies…damn. The vision shattered when Mannix eased a bit more of his cock inside, causing Taner to close his eyes. But right after that, he moved away, and Simon was fairly certain he’d withdrawn entirely, given how Taner reacted.

“No! Don’t stop.” Taner reached back, frantic to pull Mannix back inside.

Simon grinned as he angled Taner back. Using his still-slick hand, Simon lubed up his prick and pressed right against Taner’s hole. Mannix had eased the way, but he was still plenty snug. His eyes rolled back as the knob of his cock slipped inside the wicked heat of Taner’s ass.

There were no words to describe the feeling of possession that came over him. Alternating needs pulsed in his body and brain. His body wanted to fill him now and find his release deep, but his brain wanted only pleasure for his tiny mate. After a moment to enjoy the bliss of their joining, Simon withdrew his cock and angled Taner for Mannix.

Back and forth they took turns sliding their cocks into Taner, who gripped Simon’s shoulders to help hold himself up. By moving a bit closer and spreading Taner’s legs wider, they were able to take alternate plunges into him. Deeper they went each time until they were finally able to fill him completely.

“I never knew sharing could be so damn fun.” Mannix smiled then kissed Taner’s shoulder. 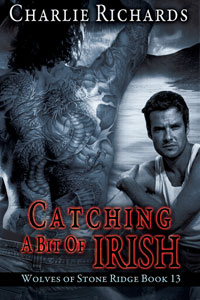