Shanna paused a moment in the aisle to straighten the ceramic skulls. Their grinning visages seemed to laugh at her. An urge to turn them all around flew through her, but they would hardly sell that way. She narrowed her eyes back at them. Their grimaces remained, unmoved.

The shop was empty, quite unusual for a full moon night. Her store, the Smiling Jack, was the only gothic curio shop in the small town of Heston, Missouri. Jack stood for Jack ‘O Lantern, as the sign with the smiling pumpkin above the door demonstrated. Ordinarily this time of month was busy, with all the Goth kids in town coming in to browse the various wares the shop had on offer. But, for whatever reason, tonight the shop was empty.

It was not, however, the absence of the adolescent thrift-buyers that had her so nervous. Her once-a-month visitor was late, and she’d planned for this night for so long, he just couldn’t skip out on her now.

The young man’s name was Robin, a fact she’d learned only after building up the confidence to ask him after his fourth visit to the shop. Dark-blond hair fell to one side of a ruggedly handsome face marked by deep-blue, soulful eyes that held Shanna firmly in their grasp every time they met. He always wore the same black silk shirt and dark pants, and somehow they never seemed to fade. The black was as deep and rich as the first time she laid eyes on his handsome frame. Wiry muscles honed to perfection wrapped the arms that fell out of that dark silk, and his leg muscles were equally proportioned, if the way his pants fit him were any indication. His package bulged with manhood, a fact she noticed upon his first visit, and had not failed see each visit hence.

How many times had she fantasized about seeing what hung behind those black silk trousers? How many times would he have to come in before she would build up the courage to ask him out herself?

Shanna’s confidence wasn’t always the highest. Though she’d always thought herself to be flatteringly curvy, most of the boys, and later men she went out with labeled her far less positively. Try as she might not to let their small opinions bother her, some of their negativity had always stuck with her.

But something about Robin just seemed different. His smile was always kind, his small talk affectionate. He winked at her after buying his monthly item, and her heart fluttered each and every time.

Shanna stood behind the counter, watching the full moon make its trek across the night sky. Her eyes darted incessantly to the darkened street, hoping to see the object of her affection before he made his entrance. Knowing he was imminent would give her time to muster her courage.

Despite her acute watch, she was still surprised when the little bell above the door rang, indicating a visitor had arrived. How he’d made it past her vigil, she never understood, though in the end it meant little. He was here at last, and now was the time to make herself known.

“Good evening, Shanna,” Robin began in his light voice. “Sorry I’m late. I got held up. I hope you hadn’t given up on me.”

“Oh, no. But I was just about to close up the shop. No one in tonight.” Shanna immediately thought that her response was the lamest thing that had ever come out of anyone’s mouth in the entire existence of humanity. Why couldn’t she form coherent thoughts when he was around?

“Well, I’m glad you waited on me.” Robin smiled as he slowly approached the counter. Shanna allowed herself a quick glance, taking in his masculine form, her eyes resting on his nethers for just a second. Shanna’s heart was beating wildly. This was it. She was going to ask him out, assert herself upon the man she wanted. She opened her mouth to force the words from her lips.

“The usual thing, I guess?” Shanna winced, and hoped he didn’t see it. That wasn’t what she wanted to say!

“Of course.” His easy smile disarmed her completely. Shanna lost her train of thought in his dreamy eyes for a moment. Unconsciously, Shanna reached down beneath the counter to retrieve the box of black candles that were always Robin’s only request. She hadn’t even bothered to stock them on the shelves in the last couple of months, since Robin bought them all anyway. Shanna summoned her sweetest smile as she pushed the box forward. She hadn’t noticed that her eyes had stayed locked on him the whole time.

Robin pushed the two twenty-dollar bills he always paid with across the counter. Shanna reached out to collect them, her fingers brushing lightly against his. Robin looked down at her contact and back up, his easygoing smile planted firmly on his rosy red lips.

“Thank you, as always.” Robin began in his light-toned, sensual manner. “By the way, I love the shirt you have on tonight.”

“Um, you have a nice shirt, too.” No! That’s not it! That’s not what I want to say! Don’t listen to my words, please read my thoughts! I want you, I love you. Oh, please see that!

“Well, thank you. This old thing is just something I threw on. Well, have a good evening, Shanna. Was so nice to see you again.”

Robin took one step back. His eyes were quick, but Shanna was almost certain he scoped her out from head to toe. Or was it just her imagination?

“Don’t I always?” Robin smiled, winked, and left her store just like he’d done so many other times before.

Their lips and tongues met in passion. Shanna hungrily wrapped her tongue around his, tasting his mouth and feeling his hard dick. His pants wouldn’t come off fast enough. Somehow, they were suddenly unbuttoned and Shanna was able to wrap her hand around his hardness. He was huge, and as hard as she’d ever felt a man. She needed to feel that dick in her mouth, in her pussy.

And he wanted to be in her, more than anything in his life. His heart raced. Everything desirable in a woman was right here in his arms.

Robin had to pull her in close to him. He had to feel her soft, supple body all over. His hands moved up and down her back, firmly grabbing her perfect ass cheeks, holding on for dear life as he explored her whole mouth.

Their burdensome clothes were quickly tossed aside, leaving a trail from the table to her queen bed nearby. Robin took a step back as Shanna fell on the bed, his eyes hungrily devouring her luscious curves.

Shanna lay on her back, their nude bodies intertwining as they explored one another’s mouths. Robin moved his hands up and down her sides, and began to slowly make his way down. A soft kiss on her neck sent shivers down her spine. Another lower down made her guess where he was going. Two more like that and he was at her firm, round breasts. He took one nipple in hand, turning it gently between his fingers. His lips covered the other, sucking gently and sending pleasure all through her. Shanna’s passion for him rose. The wait was agonizing. She wanted his cock, and she wanted it now. But the pleasure he was offering was too good to ignore. Shanna arched her back as he pulled gently on her soft breasts.

Robin had to taste her juices, he could wait no longer. She willingly spread her legs as he kissed his way down her abdomen, over her writhing pelvis, to hover just above her sweet mound. He kissed around her pussy, gently brushing the inside of her legs as he made his way closer and closer. At last, his tongue hovering over her just a moment, he took her quivering clit into his mouth.

Pleasure raced through Shanna’s body at that first touch of his lips on her cunt. Slowly but firmly, he wrapped his tongue around her pleasure, sending wave after wave shooting through her. Shanna’s moans escaped her lips with a will of their own.

“But I want to feel your cock inside of me. I want to come with you.”

Unbridled ecstasy shot through her as Robin’s tongue penetrated her wet slit. Shanna’s hips began to move with the rhythm of his mouth going back and forth inside of her. Her pleasure mounted close to explosion.

Hot desire shot through her again as Robin’s tongue wound its way back to her clit. When one finger penetrated her wet cunt as he gently sucked on her throbbing clit, waves of pleasure crashed over her. When his second finger entered, her orgasm was too large to hold back.

Ecstasy washed over her body in a tidal wave of sensuality. Every suck on her swollen clit brought another surge of pleasure. Soon it was too much to bear, and Shanna’s pleas brought Robin back to her mouth.

She could taste herself on his lips, in his breath. She had never tasted or smelled so good. It was as if being inside of him had made her own juices appealing to her. Their tongues intertwined.

“Well, you’ll have to wait”—Shanna smiled hungrily—“’cause I want to taste your cock.”

Shanna rolled him over. His erection couldn’t have been harder. Shanna kissed slowly down his stomach, much as he had done her. His cock throbbed with anticipation.

Shanna took his manhood gently in her hand, looked slyly in his direction, and licked up, from the base of his shaft toward his purple mushroom tip. Nothing had felt so pleasurably intense in his entire life. Shanna licked again to send the bolts of heat surging through his crotch. After a few teasing licks, Shanna took his hard manhood into her mouth. 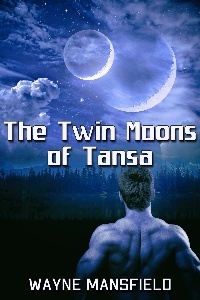 The Twin Moons of Tansa (MM)
Wayne Mansfield
In Shelf
$1.99
Tweets by
sirenbookstrand