When love arrives, it doesn't come quietly. Especially for Carmen Redstone and Donato Genonese, partners in a squad car, lovers at every opportunity. Nothing can cool the blaze of passion ignited between them, not even an accidental shooting that could have ended both their careers.

Fate brings them back together professionally, but Carmen isn't ready to commit to anything more. Held prisoner by past hurt and a nightmare memory in every corner, Carmen fears her deep love for Don will be thrown back in her face. But Don plans to make her his once and for all.

When Don seeks a lifetime commitment from Carmen, she'll have to decide if she's ready to go to him, heart in hand and with a love to last for all time.

"I love the characters in this book, their love and their passion for each other is constant, even though they sometimes can't find the words to convey that powerful emotion. While the passion is the focal point of this story, everyday life gives you a glimpse into their softer side, and the ties of love not even the worst elements can break. Carmen is a butterfly, refusing to land on the flower it yearns for, a woman consumed with desire to make it in the world of law enforcement, struggling to keep her love for the job separate from the man who has taken her heart." ~ Betty ~

“Be still.” He clamped his hand over her mouth and whispered in her ear. “I see the headlights of a car downstream on that old boat loading ramp.”

Roughly he her pushed aside and left her standing in ankle deep water as he headed downstream.

“Damn you, Don. You’re not leaving me here.” Following him at a dead run had to be a nightmare. Stumbling over rocks and stepping into sucking mud, she caught up with him a few yards from the ramp.

He motioned for her to get down, his way of saying he’d handle the situation. She grudgingly complied, knowing he’d seen someone in the car.

“What?” Carmen stood, and pressed close to him. “What are they doing?”

“Did you see the John in there?”

Don pressed his finger to her lips. “It’s just two Johnettes.” He took her hand and led Carmen away from the car. “I could never mess up a man’s, err, a chick’s come. That would be cruel and unusual.”

“Cruel, my ass.” She took a step back toward the car. “They’re breaking the law. What if some guy walks by here with his kids?”

“Fat chance of that happening.” Don slapped at his neck. “Who’s going to bring kids out here? These mosquitoes are a lot more dangerous than two chicks getting it on.”

She wanted to rip him a new one, but instead lost her footing and slid down into the muddy water. Buffeted by branches and trash coming downriver, she grabbed for anything that would keep her near the bank.

“Don!” She choked on a mouthful of the disgusting bilge and spit it out. “Don!”

She heard splashing close by before she saw him. He was there, running out to where she fought to keep her head up. He grabbed her around the waist and hauled her to shore.

“Help a little here.” He stumbled and went down, taking her with him. She would have laughed, but she was a little afraid he’d let go of her. He managed to slog out of the water, pulling her along like a sack of potatoes. “Here we go again.”

She didn’t care what he said. Nothing had ever felt better than the mud under her back, and she wasn’t interested in him at the moment.

A few minutes passed before curiosity made her ask what he’d meant. “Were you making a chauvinist comment about me, Don?”

“Hell, yes.” He rubbed water out of his eyes and pointed at her nose. “You’re a fucking menace, Redstone.”

She sat up and twisted her sopping hair into a long ponytail. “I hear you, and thanks for dragging me out.” She was grateful for that, but his continual little digs dimmed her desire to be nice to him.

He stood, checking to see if he still had his weapon and shield. “If you’re finished wasting time, let’s find those high-class bastards.” He swiped at the mud on his jeans. “Lord, what a night.”

“That you’re a nice guy when you have to be.” She scrambled to her feet and headed out onto the sandbar.

She heard his footsteps behind her, glad he’d covered her back. The sandbar was soft, and she sank past her shoe tops. She hated to admit he’d ever been right about anything, but going home for a fast change of clothes would have been the smart thing to do.

Hearing men’s voices, she stopped. “They’re at the end of the outcrop.” Pulling out her Glock, she bent down to wait for Don to talk over their plan of action.

“I don’t think we should take them completely by surprise.” He squatted next to her. “I say we go with plan one.”

“The one where you play sheriff and I show up as Gabby Hayes?” His soft groan made her reword her comment. “Okay, you let them know you’re here. I’ll bring up the rear.” She rolled her eyes, and watched as he moved ahead.

She followed, staying several steps behind him. He walked along the edge of the bar, gripping his weapon in both fists.

Damn, why didn’t he say something? The felons had stopped talking and doused their lantern. They obviously knew the cops were there.

“It’s the KCPD, boys. Put your hands on your heads and walk toward us.” Don yelled his orders, but the men on the sandbar remained silent.

All hell broke out after that. Glass breaking, gunfire and screaming rolled up the river and twisted her nerves into stretched barbed wire.

With no light to see where they were, Carmen stood her ground in the middle of the narrow island, bending her knees for better leverage.

She heard Don ordering them to drop their weapons and hit the dirt. From that point on, everything was a mix of cursing and more gunfire. Someone ran toward her.

She heard the door slam behind them, and felt the strength of his arms hauling her snug against him. From that point, desire rendered her a little crazy.

His mouth crushed down over hers, his tongue demanding entry. She didn’t need coaxing, her lips parted, softening under his until their tongues met in passionate exploration. He was dominating, powerful and rough, pressing her to the wall.

Her panties were wet, and the scent of arousal permeated the warm air. In her passionate stupor, the sound of ripping material jolted her to dreamy sanity. What did she care about popping buttons and ripping material? The zipper of her slacks cried out in protest under his rough treatment, but gave in with a high-pitched whine as her slacks fell to the floor.

His moan spurred her into action, her fingers freeing the belt around his lean waist, working deftly to unbutton his jeans. Pushing her hand down and over his hard belly into his shorts aroused wildness in her. He was hard as blue steel and growing in her hand, beads of pre-come wetting her palm.

She pushed her hips against his hand, spreading her legs to give him all the room he needed to massage her clit. She lifted her leg to his waist, holding him closer to better enjoy the stretching of her pussy around his fingers.

Cool air licked over her bare breasts until his warm palm covered her nipple, his fingers squeezing the taut bud into a sensitive point.

He caught her hand and rasped against her mouth. “You’re going to make me explode in your hand.” He kissed her hard and sucked her lower lip into his mouth, nipping lightly. “Damn, Redstone. You’re fucking hot even with mud on your face.”

She squeezed his cock again, and laughed. “Come on dirty boy.” She pulled away from him and headed for the bathroom. “I’ll let you wash me.”

They stripped on the way to the shower, dropping what clothes they still wore onto the floor. Don caught her in his arms, hungrily kissing her, dipping his head to suck her nipples. She didn’t have to see his cock to know it stood up tight against his belly. The hot bulge plastered against her skin spurred her into a frenzy of passion with the need to have him inside her.

Somehow they moved to the shower stall, and he turned on the water. It was cool, but didn’t extinguish the blazing heat engulfing her.

Carmen locked her arms around his neck, holding him close. He had his wits about him evidently, finding her shampoo in the caddy above her head. She closed her eyes and savored his hands washing her scalp and body. They slid over her ass to her crotch, his fingers stroking her folds and clit, finally sliding inside her pussy.

“Find anything in there?” Her voice was husky with desire, legs tensed with need to release her building climax.

“Just checking.” He nuzzled her neck, dropping a bar of soap into her palm.

“Checking for what?” She always wished she didn’t have to question his every motive, but it was just part of their relationship. “Find it?”

“Yeah, still tight as a drum and ready to be kissed.”

She rolled the soap over several times in her hands, working up a thick lather. Taking her time, she spread the bubbles over his chest and stomach, slowly lathering up his neck and shoulders. Her pussy clenched with raw desire as she watched the trail of bubbles settle around the base of his cock.

“Are you satisfied with what you see, Redstone?”

It took all her willpower, but she turned her back and rinsed her hair, trying to forget how hot she was for him. “I’ll let you know after we take it for a test run.” She looked over her shoulder, a tiny smirk on her lips. “It’s been a while. Something might have changed.”

She shivered in the tide of desire whipping through her body. He pressed against her, cupping his hands over her breasts, nipping her earlobe.

The heat of his cock against her ass burned a trail of sizzling need to her throbbing pussy, clenching onto his fingers he dipped inside her.

“Redstone, I think you want me.” His deep voice crooned into her ear, and his muscled thighs molded to hers as his fully-loaded dick flicked her ass.

He turned her to face him, teasing her lips with his tongue. Her body was slick inside and out, quivering with raging desire to be under him.

She gripped him, working her fingers along the rigid, veined length until his mouth crushed down over hers in an assault of passion. “I know you want me, Don.”

“I’m ready to come, so stop with the hand job, gorgeous.” He turned off the water, reaching for the towels hanging on the bar outside the shower stall door and quickly wrapped one around her.

Carmen dried her hair as well as she could while he backed her against the wall to plunder her mouth with his tongue. She shivered, not with cold, but anticipation. Her voice was a shaky whisper. “I want you to come, but not here.” 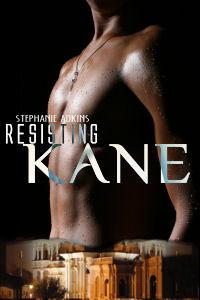