Lucas has a typical life -- apart from being abandoned as a baby, raised by wolves, and having super powers. Still, inside, he feels like two people, both vying for control of himself. He's a superhero and a nerdy college freshman. He's both feral and tame. He wants to do good in the world and, at the same time, he wants to do nothing. And most of all, he wants to find his birth parents.

In this comedic tale of romance, mystery, and adventure, our hero is joined by his hunky boyfriend, his acerbic boss, an uptight college science professor, and his ex-boyfriend/once crime-fighting partner -- not to mention a whole pack of wolves -- to help foil his nemesis and uncover the secrets of his past to save his future. 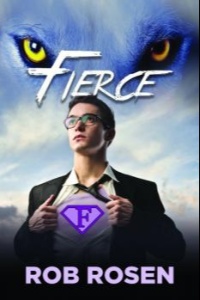 "Huh," I said, breaking the kiss, however reluctantly.

"Maybe I should've sewed a giant letter H into your costume instead of an F, Lucas."

I shook my head. "I mean, huh, I'm hearing things I shouldn't be hearing."

He smiled so brightly that I wished the costume came with sunglasses. "It's your mask," he said. "Where it covers your ears, I put in miniature hearing aids. They amplify your already spectacular auditory abilities. Neat, right?"

I didn't answer him. And I wasn't smiling either. "Someone's in trouble," I said.

His grin promptly flew south for the winter. "Where?"

I moved my head left to right. I shut my eyes. I could hear it clearly. It was someone struggling, someone asking for help, begging for it. I didn't know how far away, but I knew the exact direction. With the mask on, I was more homing pigeon than wolf. "Toward our school," I replied. "Southwest of here. No more than a mile away."

He sucked in his breath. "You can hear that far away now?"

I shrugged. "Seems so. If I concentrate hard enough, I mean." I popped my eyes open again. "What should we do?" My heart was racing. This was a crossroads. I felt is as sure as I heard the cry for help. Did I go left at the fork? Did I go right at the fork? Or did I shuck the costume and simply spoon with Craig instead.

I was contemplating Option C, when he replied, "What would a superhero do?"

I sighed. My shoulders slumped. "We're not superheroes, Craig; we're eighteen-year-olds in shiny suits. You don't even drive yet. You failed your driver's test, in fact."

He scowled. "That parallel parking is a bitch." He pointed at his wrist, at a nonexistent watch. "Make up your mind, Lucas. Someone's in trouble. We don't have much time."

He was right. I heard it in the voice of the woman crying for help. Which is why I found myself running down the street not a minute later. I'm sure I must've looked like a purple blur. I ran faster than I'd ever run before. The onesie was padded. My feet didn't even feel the pavement. Leave it to Craig to think of everything.

I reached her in no time flat. I was barely out of breath, though my heart was beating a mile a minute -- not out of fear, not out of exertion, but out of pure excitement. There was adrenaline rush, in fact, and then there was this.

My eyes locked in on her. She was behind the wheel of a car. The car had jumped the curb and rammed into a tree. The car was a mess. She looked far worse. Blood was dripping down her forehead. I could smell it, could hear her heart as it pounded in her chest, could see the fear in her eyes. She had reason to be afraid: the car was steaming something awful. It was coming from the engine.

I didn't think; I reacted. I'd been standing there one second, I was pushing the car away from the tree a moment later. It screeched as the metal twisted this way and that. The car was heavy, but it was no match for me, for the rescuer in purple and lavender. And no, this wasn't ego; this was destiny. You know, mostly.

I yanked the car door clean off its hinges. "Are you okay?" I asked. She nodded, weakly. "Can you wiggle your fingers and toes?" She paused. She seemed to check. She nodded again, and so, I figured, I could safely move her.

I scooped her up in my arms. She seemed to weigh nothing. She looked confused as she took me in. "Don't worry," I said. "I'm here to help."

She gulped and nodded. I ran us down the street and gently placed her on the grass.

The car groaned and exploded a mere second later, belching smoke and fire up into sky as the fire department and police began to arrive. She stared at me in amazement. I stared down at my outfit and knew I couldn't stay a moment longer.

"You'll be okay, ma'am," I said, pointing to the advancing ambulance.

I stood up. I smiled and puffed out my chest. "Fierce, ma'am," I said, proudly. "My name is Fierce."

Sock It To Me
Jo Tannah
In Shelf
$0.00
Tweets by
sirenbookstrand