Brant chewed his lip and looked around. He had fallen down the rabbit hole long ago, and it had been ages since he had sought a way out. He remembered exactly when his life had gotten all strange. It had been when the human-looking guys, who definitely weren’t human, had gotten ahold of him. Two years and five months had passed. He knew that much.

There were several times when he had thought about sharing what was happening to him, but who would believe him? Hell, most of the time he didn’t believe what was happening to him. Case in point, he thought as he looked down at his slightly distended lower belly, he was pregnant. It was the fourth time in the past two years. With a gestation period of less than five months, this would be his fourth child. Despite his questionable sanity, he couldn’t risk the lives of his children or that he and they would be made into science experiments. There had to be a way to get them away from the city and to safety, but he didn’t know how he would accomplish that.

Pushing the shopping cart around the store, he was there for beer and snacks. The shifters, as they called themselves, loved beer and processed meat products, potato chips, and dip. He loaded the cart until items began to fall off the top, relieved that he didn’t have to use his own funds to pay for it. Not that it would break him financially—it wouldn’t—but because he didn’t want to spend his money on his captors.

When he got to the register to pay, he pulled out the wad of cash he had been given, wishing the shopping trip had taken longer. He wanted his old life back. He definitely didn’t want to know about things that went bump in the night. He didn’t want to be pregnant for the fourth time, nor did he want to have to worry about three precious children he would give his life up for.

As Brant drove home, he frowned, suddenly remembering a man from his past. He didn’t remember much. Memories were definitely fuzzy, but he did recall treating the man like shit. It seemed he had done a lot of that in his past. What had his name been? Al? Alvin? He was fairly certain that the name had begun with an A. It aggravated him that he didn’t recall, but the vacation he had been on, those two weeks he was told he had been away, were a complete blur in his mind. It was like something out of his college days, when he would go on spring break or a party and overindulge.

Overindulging and forgetting seemed like an excellent idea to Brant, but he had to forgo anything that might be mind-numbing because of the child he carried. Despite being forced into this situation, he would never harm one of his children. He was grateful they were still alive and they were together. The alpha of the group holding him captive, and the one responsible for impregnating him, wanted a male child. Brant was what they called a breeder. He was a rare kind, however, and had been traced through his family history. Evidently one of his male ancestors had been used as a breeder. That was how it had been explained to Brant.

It seemed that normally shifters alphas could impregnate males, but nature had built in to only allow it to happen every two years. Brant had been singled out because of his ability to be impregnated almost immediately after giving birth. He could also nurse his babies, another ability the alpha valued. Forget everything he had learned in health class. Human males could become pregnant if they were impregnated by a paranormal male. It was like science fact meeting science fiction and changing reality, one Brant had never wanted to be part of.

Driving up to the security gate that prevented people from entering the parking garage beneath the building he owned, Brant waited for it to lift. When it had done so he wasn’t surprised by the armed men he saw, shifters, standing out of the way as he drove in. Their expressions were grim. They were always so cold and stoic. There was no chance of ever falling into the trap of becoming dependent upon any of these men. There were a few women in this pack of theirs, but they were worse than the men. They openly displayed their hate for Brant. It was obvious he was being given a chance to do something that they had not, and that was to give the alpha a male child.

Jean-Luc sighed with pleasure as his vampire mate took his nourishment from him. He shivered as Niall sucked the blood into his mouth. If that didn’t cause him excitement enough, Niall was plucking at his nipple, toying with it in a way that had his fangs beginning to extend[KM1] .

When Niall released him, sealing the punctures with a swipe of his tongue, Jean-Luc trembled and moaned. Now free to move, he growled and rolled. Grasping Niall by his broad shoulders, he pinned him to the bed.

“You are too much of a tease,” Jean-Luc accused.

Niall smiled up at him. “Only because you are so much fun to tease. I like to hear those cute little noises you make, when I find a spot on you that is very sensitive.”

Frowning, Jean-Luc lifted slightly away. “I do not do cute.”

“You are doing it at this moment, my love.” He watched his handsome vampire smile smugly. “You are also absolutely adorable, when you try to go all badass gargoyle on me. Now, do you think you could do something about this?” He pressed his erection against Jean-Luc’s thigh. “It hurts.”

Tipping his head to the side, Jean-Luc studied his handsome mate. “Are you pouting?”

“No. Roll over. Fucking you seems to be the answer to this dilemma.”

It confused Jean-Luc when Niall played like this. Flirtation was something he had never experienced before. Well, he was certain he had at some point, but it would have been before he had been cursed and transformed into a gargoyle. He seemed to be cursed now, with being slow at learning how to react appropriately. He was fortunate to have a mate who understood him. Niall never became impatient or angry or took offense if he wasn’t reacting appropriately.

Smiling and nodding, Niall went into a half-sitting position, stealing a kiss as he did so. Feeling the connection between them, Jean-Luc relaxed and prevented Niall from moving. The man was his mate and his savior. He had helped Jean-Luc retain his sanity when he had lost his first mate while he had still been a gargoyle. The human had rejected him. He had been horrified by the sight of Jean-Luc as a gargoyle. Because he had still been cursed, he hadn’t been able to shift to human at the time. The rejection had crushed Jean-Luc. He had mourned the loss for months, until Niall Gray had come to him and revealed that Jean-Luc was his mate. Unlike others in the paranormal world, gargoyles normally could not sense who their mate was. Perhaps it was because he and his brothers had been transformed from human to gargoyle[KM2] with magic. As far as he knew, there had been one exception and that had been Brant. The moment he had seen and heard the human, Jean-Luc had known Brant was his mate.

“I love you,” Jean-Luc whispered. He might be clumsy about some things, but he always wanted his mate to know that he meant the world to him. “You’re the most wonderful man I know.” As much as he wished both of his mates were there with him, it wasn’t to be. Jean-Luc accepted that. Still, he continued to feel an emptiness he couldn’t allow Niall to see. “Now I will make love to you. I will begin with your cock. I will suck it until you beg me to stop.”

Niall chuckled and went in for another kiss. “That will never happen.”

Ten minutes later Niall was doing exactly that, begging Jean-Luc to end the torment. Smiling, far from ready to bring an end to their playtime, Jean-Luc gave a swipe of his gargoyle tongue from between the cleft of Niall’s ass, over his tight balls, to the tip of his cock. Tasting the pre-cum leaking from the tiny slit, Jean-Luc felt his own cock throb. He wanted to come, but would wait until the length of his cock was buried deep in his mate’s dark channel.

The whimpering and begging was nearly Jean-Luc’s undoing. Pushing up onto his knees, he tapped Niall’s thigh and watched as he turned over. Spreading his legs, he lowered his shoulders to the mattress and offered his ass. Jean-Luc reached for the lube. He poured some onto his fingers and more down the crevice between the mounds of Niall’s ass. It didn’t take long to prepare his mate. Jean-Luc smiled as Niall began to push back, eager for each additional finger, until he was ready to accept the cock aching to possess him.

Lining up the head of his shaft to the stretched ring of muscles, Jean-Luc quieted Niall’s pleas for a few seconds. His vampire mate seemed incapable of speech as Jean-Luc slid into his body, finally burying himself balls-deep, his balls slapping against Niall’s.

“Oh, don’t hold still. Do something. Move…fuck me!” Niall begged when Jean-Luc took a moment to enjoy being encased in the silky dark channel. The tightness and heat were meant to be enjoyed.

Sliding his fingers over the muscular mounds of Niall’s ass, Jean-Luc tested their firmness, the tips of his fingers pushing against muscle. Niall was a doctor, not an athlete or particularly active, although they did enjoy going for walks in the forest and horseback riding. Jean-Luc had decided long ago it must be a vampire thing. 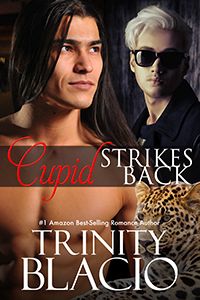