The humans are tired of living in fear of the vampires. Hawke West, a skilled assassin, is sent on a mission to kidnap any important member of a rich vampire house in the hopes of finally starting an open war instead of allowing the vampires to pick them off. The problem is that the vampire he kidnaps is the very one who freed him from slavery as a child, and now he finds himself not only protecting him from his vampire-hating village, but also falling for him. William Delany was running from an arranged marriage when Hawke came back into his life. Though their former relationship was of a master and servant, they were still children together, and he hasn't forgotten the man, and Hawke has become very handsome indeed. Now, Will's only concern is whether he should escape or stay with Hawke where his future, and the length of his life, will be uncertain. 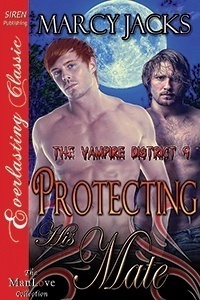 The Alpha Wolf's Convenient Mate (MM)
Marcy Jacks
In Shelf
$2.50
All Books In Cart
All Books In Bookshelf
Excerpt

His gloved hand came up from where they had been tightly gripping Will’s arms, and he gently cupped his cheeks. Will flinched a little as the man’s thumbs brushed away some of the dirt and dried blood that had collected on his cheeks, but he wasn’t being rough about it. If anything, he was trying to be gentle.

Will wasn’t about to risk that this was some kind of trick, a ploy that was in the beginning stages of making him trust his captor.

Will’s eyes widened. He tried to step back, but then the man’s hands went to his arms again, and the grip was tight once more.

“I’m right, it is you,” he said, and then undid the gag and pulled it out from between Will’s lips.

Will spat out some more of the dirt that was still stuck on his tongue and between his teeth. He knew he was going to be feeling that terrible sensation of tiny, popping rocks whenever he spoke for the next little while.

The assassin hesitated. Will never thought he would be alive to get the chance to ask an assassin anything. That was sort of the point. They were meant to kill before the target even knew they were there.

Finally, the man reached up and pulled the mask off of his face, revealing himself.

Will’s heart went into overdrive, and he actually had some trouble breathing. The darkest eyes he’d ever seen stared down at him expectantly. He’d seen them only once before and never thought in a million years that he would be fortunate enough to see them again.

He was older, thirteen years older, and so much more handsome than the dirty boy Will recalled, but it was definitely him. Even all the years and the addition of a well-trimmed beard couldn’t hide it. “You.”

The man gave him a crooked grin, and his blue eyes seemed mischievous and playful. “Yeah, me. Been a while, hasn’t it?”

He didn’t have a name, back when he was just a slave boy in William’s father’s house. Everyone had just called him Boy. That was the way it was. He’d worked in the kitchens, stayed out from underfoot, and was often brought in whenever someone wanted to feed from him. Even William had tasted from his vein before.

But he’d been just a child then as well. He hadn’t known any better, that what he’d been doing was wrong.

They had been the same age, as far as Will was able to tell. Of course, malnutrition could have made the large man before him seem much smaller than he was at the time. Will guessed them both to be about ten years old by the time the servant boy had tried to make his escape.

And Will had let him go, all those years ago.

“What’s your name?” William asked. He had to know. By now he must have taken a name for himself.

“Hawke,” Will said, testing it out on his tongue. Then he looked down at the dead guards before looking back up into Hawke’s nearly black eyes. “I guess it fits. You are a predator now.”

“Only to vampires,” he said, his face twisting into a frown. “You’re coming with me.”

Will dug his heels into the ground when Hawke tried to lead him away, his terror suddenly returning full force as it occurred to him that Hawke would not be his savior now as Will had been to him back then. “Wait, where are you taking me?”

“Away from here. My clan needs a hostage, and from what those guards were talking about, you’re still more than valuable.”

“That’s enough talking for you,” Hawke said, and then the gag came back.

Will ducked his head around, but then Hawke produced the knife again. “There’s silver on this blade. I’m warning you. Hold still.”

He meant it, too. His eyes were hard, and if Will kept on struggling against him, or if he called out and tried to run, Hawke would chase him down and cut him.

“Why are you doing this? I saved your life,” Will said, then the gag was shoved into his mouth and tied around his head, and he could no longer speak with his mouth full of the material, and the tie preventing him from spitting it out.

“That was years ago. If anything, you owed me that, considering the blood you stole from me, and the shitty life I was living right under your command.”

Will was only a child then. It hadn’t been under his command and Hawke should know that. He wanted to argue those points, but couldn’t now that he was bound and gagged.

Hawke turned away from him for only a second, just long enough to put his mask back on, and Will, the coward that he was, was too afraid to try tackling the man, or running while he wasn’t looking.

“All right, come on,” Hawke said, and then did something completely crazy. It happened so fast that Will didn’t even have the chance to prepare for it. Hawke bent down at the knees, looped his arms around Will’s legs, and then put his shoulder at Will’s stomach.

He lifted Will up and onto his shoulder, and the ground leaving his feet like that was so startling that Will made a distressed sound through his gag.

Will had no idea what he was talking about until Hawke started climbing the trees, and he knew without a shadow of a doubt that this could be no ordinary human he was dealing with.

Will shivered at the sensation of cold and slick lubricant, or what Hawke was using as lubricant, being smeared and rubbed against his asshole. It took a second before it warmed up on his skin, and when it did, he sighed. He’d lifted his knees up and spread his legs wider, and now Hawke’s fingertips weren’t just touching him, they were sinking inside him, preparing him, and all the while the other man had a look of absolute, beautiful concentration on his face.

It was lovely as fucking hell.

“Bet you never thought you’d be in bed with a vampire,” Will said.

Hawke’s wolfish grin never left his face. Maybe he should have named himself after the wolves instead. It would have been so much more fitting.

“Bet you never thought you’d be in bed with a human.”

“You got me there,” Will said, panting as the sensation of those fingers inside of him got to be too much.

Hawke hooked his fingers inside of him, searching for his prostate, and then like a tracker dog he found it. Will’s eyes flew wide and for a split second he couldn’t see as he turned his face against his arm and bit down on his skin. Not hard enough to break the flesh, but it did stifle his moan and help to center him.

Hawke had mentioned the possibility of other hired hands coming in here if there was too much noise, and there was no way Will was taking the risk of this being interrupted.

He was just starting to really wish the man would hurry up. He was apparently one of the few in the world who had some real patience when it came to his lovemaking, but then he felt the fingers gently pull out and the blunt head of Hawke’s dick pressing against his pucker.

“If you wait any longer, I will have to start making a serious effort to get out of these ropes, and then I’ll have to ravish you.”

“We’ll try that later. I seriously doubt you can get free of any ropes I’ve tied.”

He didn’t get the chance to finish what he was about to say as Hawke pushed forward, sinking himself inside of Will.

It had been way too long since he’d done this. The wonderful burn, and the sheer fucking pleasure of it was so much that he nearly came like he was still eighteen.

Hawke must have seen this, because he reached down and took hold of his cock, gripping it at the base as he held still and stared down at him.

“Do you have a hair trigger in there or what?”

Will’s body was bowstring tight, and he glared up at Hawke, not daring to move or say anything just in case that would be enough to make him come.

Hawke gripped him, but that apparently was not enough to keep himself from moving for very long. He started to slowly cant his hips. He bit his lips together and moaned softly as his eyes fell shut.

That was so not helping Will to keep from spilling his load, but he had to admit it was good. The combination of the sight of the man above him, as well as the moving cock inside of him, was still working to make him feel like he was having the best sex of his life, only Hawke’s hand was making sure that it wasn’t about to end prematurely.

“That’s good,” Will moaned. When Hawke had tied his hands, he’d left enough slack in the ropes that he could still move them just a little, and he grabbed the frame and gripped it tight as Hawke touched his prostate deep inside him on his next thrust.

That time he’d forgotten to bite down on his arm to keep from moaning too loudly, but Hawke no longer seemed to notice as he started to move like a man possessed. His thrusts were so hard and fast that, had Will not been gripping the frame of the cot, he would have been pushed upward, and then his wrists would really start to hurt from the ropes.

He couldn’t keep himself quiet, especially when Hawke finally released his dick and put his hands on either side of Will’s head and just moved like a wild animal in heat.