The Heroes of Silver Springs 6

Tess returned to Silver Springs leaving her heart and acting aspirations behind in Hollywood. Two years later, both have followed her. Now an officer with the SSPD, she's found the strong, in control, happy side of herself she always sought. But a single command from Devon Gerard's panty-wetting voice takes it all away, sending her spiraling down a path of wicked desire.

Devon never understood why Tess left. Still, he let her go without a fight, and it was the stupidest thing he ever did. When his latest role brings him to Silver Springs, he knows it's time to reclaim what is his. But a case she's working on collides with the film he's shooting, throwing them into a battle that rages with danger, deceit, and desire.

The Heroes of Silver Springs 6

4.5 CHERRIES: "I loved this story as it continued the story of a character who has been in the periphery of the Silver Springs series for a number of books – finally she got her own book and what a book! A hunky star with good looks and a multitude of skills in the bedroom for a leading man is what any girl would wish for. Added to that he is not just a hunk, he has an emotional depth to him that makes this story work. Once again Ms. Ramagos has hit the jackpot! While this is part of a series, these books can be read as stand alone books. Her characters are well rounded with emotional depth and they are grounded in reality – you could believe that they exist and that you might just see them walking down the street or even better know them personally. I, for one would love to personally know some of these hot heroes of Silver Springs. I certainly hope that the next installment of the series is as scorchingly hot as this one has been!" -- Statice, Whipped Cream Erotic Reviews

4 CUPS: "I really enjoyed this novel. It is full of interesting and charismatic characters and the plot is exciting and full of passionate love scenes. Tess and Devon have a very complicated relationship and neither was very open with the other in the past. They never told each other exactly what they were feeling. The filming of the movie and the police’s search for the remnants of the Cambodian drug runners blend to form a very exciting story; there are some pretty intense action scenes here also. The subplot of Adrien and Thad’s romance was very interesting and worthy of a book of its own. I was unfamiliar with this series and look forward to reading the rest of the stories." -- Maura, Coffee Time Romance & More 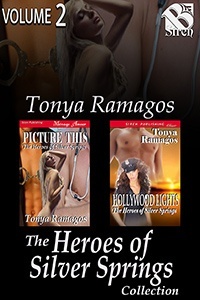 Tess couldn't think. Perhaps that was a good thing.

No, not perhaps. Not thinking would prove to be a very good thing. At least until this ended. Until reality slapped her in the face and her real world returned.

But right about now, with Devon's hands on her ass and his tongue inching toward her aching heat, she couldn't remember precisely what her real world entailed. His tongue skipped lower, stopped a millimeter from hitting home, and she whimpered.

"Please." She hadn't meant to beg, would surely be embarrassed as hell about the fact that she did later, but now it rendered her with the ability to forget her inhibitions. Her body wanted, needed things he denied her, and if she had to beg to get them, then Goddamn it, she'd beg.

He laughed, the bastard, a breathy chuckle against her lower belly that brought goose pimples to the surface of her flesh from the roots of her hair to the tips of her toes. Then he pulled back, pushing her from between his legs, and she truly considered kicking the shit out of his shin. That would teach him to find amusement in her torment. The idea skittered out of her brain when he started to bend her over his lap.

"W-what are you doing?" Mortification warred with the devious thrill that kicked up in her middle.

"I'm about to give you the punishment I owe you. Lie across my lap, Theresa, and don't fight me or it will be worse."

She couldn't do it. With this one act, he would strip away a sizeable chunk of the self-preservation she had built since leaving him.

She wanted to do it. The need to obey him, to submit to his every command, burned her insides from nipples to pussy.

"Theresa, I did not make a request." His tone hardened, the authority settling in the air like a stone.

Tess let him guide her until she lay on her stomach across his thighs, arms bound behind her back, her ass exposed to his sight and his hand. She closed her eyes as he caressed first one cheek and then the other. She sucked in a breath of half fear and half anticipation as he slipped a finger beneath the thong that sliced between her cheeks.

"We're not going to discuss this punishment now," he told her, his voice thick with his own arousal. She could feel his cock, long and hard, inside his jeans, pressing at her side. "You know what it is for."

She did. She left him. A feat she didn't deserve to be punished for and yet couldn't find it in herself to protest the sentence he'd given her. Because as right as she had been to do what she did, the devil inside her wanted this, needed to be disciplined for her actions.

"You will take this punishment without argument and when I'm done, you will thank me. Do you understand?"

Thank him for punishing her? Not a chance in hell, pal. She nodded and heard the quiet "Yes" spill from her lips seemingly of its own accord.

The first hard slap to the tender flesh of her ass stung like a bitch. Tess inhaled sharply. The second didn't come immediately. Instead, Devon took a moment to palm the spot, soothing the burn and allowing the anticipation to build.

"Mmm, I've always loved the way your flesh turns such a fantastic shade of red when I spank it. You didn't do as you threatened, the all over tan you talked about getting. I'm glad. I might have been forced to punish you more if you had."

A second slap came on the heels of his last word, and her cheek exploded in a riot of vicious pleasure. The third smack landed on her other cheek quickly followed by a fourth. He'd always been thorough in making sure each side got equal attention. His fifth and six strikes came harder and faster, and her pussy gushed, her juices leaking from between her feminine lips.

She felt dizzy, her head spinning in a tilt-a-whirl of pain and pleasure. The lines between the two blurred beyond vision. That's when she lost count. He spanked her, working her tender flesh until her bottom flamed, her pussy convulsed, and the orgasm knocked on the walls of her sodden channel.

"Theresa, are you about to come?" He stopped, the next blow so close, she could feel the warmth of his hand, but he didn't make the contact.

"Please." She squirmed on his lap, struggling to lift her buttocks to meet his hand, fighting to squeeze her legs together to offer a bit of pressure to her throbbing clit.

He slid his hand beneath her panties instead, pushing her legs apart to swipe a finger between her pussy lips. "Damn, Theresa, you're soaked, baby. I know you didn't come already."

"Not yet," Tess said through gritted teeth. "But if you'll give me another second, I will."

He laughed, and she considered biting his thigh since she dismissed the idea of kicking his shin earlier. He remained fully clothed, but she bet she could get in a good bite through the denim of his pant leg.

"Do you want to come, Theresa?"

He tsked. "Such feistiness should earn you more punishment, not pleasure. Although," he paused to circle his finger along the outer edge of her opening, "it feels as though punishment gives you pleasure, as well."

Tess said nothing at that. She couldn't. She didn't want to acknowledge the truth of that statement.

"I can be." Warning rang in the air from those three little words.

"No, please." He couldn't stop, couldn't leave her like this. She'd die from the torment.

"Then thank me for your punishment."

Tess gulped. She couldn't say it, wouldn't. Her lips parted, another argument on the tip of her tongue, but the two humiliatingly truthful words spewed out instead. "Thank you."

"How do you wish to be pleasured, my love?" 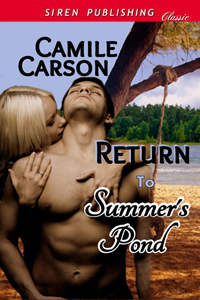