If All the Sand Were Pearl (MM)

As a youngest son, Jag Martin has eagerly walked a life-long path toward the priesthood. Then his once-great family falters under a mountain of debt. Their only hope -- marry Jag off to an appropriately wealthy suitor.

Brace Rivers desperately wants more than just a short fling. However, his economic and political reality makes finding an appropriate male partner next to impossible. When the Martin family offers Jag's hand, it's a dream come true. But he fears the young man is being forced into an unwanted marriage.

Following tradition, Brace offers Jag a pearl ring valuable enough to save his family's fortune. Jag has twenty-four hours to accept the gift and turn his back on Brace, or return the gift and accept Brace's hand. Brace only hopes he will convince Jag that a life together is worth more than all the pearls in the sea.

If All the Sand Were Pearl (MM)

Brace kept trying to fiddle with the ring that was no longer on his finger. It was a nervous habit he picked up shortly after he inherited it, and now he couldn't stop reaching for it. If his father knew he had offered the family heirloom as the wedding gift, the old man would have threatened to disown him. Or perhaps cancel the wedding entirely. But his father was dead, the ring belonged to Brace, and he had no reason to be nervous. Unfortunately, it didn't matter how many times he told himself that. As he waited for the bedroom door to open, and the stranger who would be his husband to enter, his anxiety only heightened. He paced. He ran his hands through his hair and wondered if he should have visited a barber. He smoothed his fingers over his beard and wondered if he should shave. There might be time. But what did it matter? If the Martin family had lied, a distinct possibility, and the young Jag didn't want to be betrothed to a man, he could be completely hairless and still be rejected. His ring would still be sold. He'd be sent home, empty-handed, as alone as he was before.

Brace moved through the large suite, checking and double-checking everything. There were certain steps he needed to take, certain traditions to follow. And the Martins had thought of everything. An altar to the Goddess dominated one wall with the appropriate number of candles for the marital blessings. They released a light yet rich aroma, reminding Brace of the sea. The Euclid Province was the furthest inland and Brace only saw the sea when he had business on the coast. But the coastal people were devoted to the ocean, and it wasn't a surprise to Brace that their devotions included the aroma of salt air and seaweed. A tapestry hung on the opposite wall, the ruby sun rising over silver-tinged waters, and the other two walls were bare, painted the bluish tint of a full moon.

The family might be close to destitution, but they hadn't stinted on their son's wedding night. The room had been stocked with the richest food and the finest wine, silk bedding, soft pillows. The food was of particular interest to Brace, as the table featured delicacies he hadn't enjoyed since he was a young man. The eyes from sea serpents, the black-tipped fins from sharks with the same name, sweet raw lumi fish and lumi roe, dried seaweed and several varieties of bread and crackers. A shelf next to the bed contained everything else they would need for their wedding night -- lubricant, massage oil, creams and even an array of dildos, ranging in sizes. Young Jag Martin was a virgin.

"He was planning to enter the priesthood. So he will not be ... experienced on the wedding night." That's what Dame Martin had said in a hushed, apologetic tone. Her words hadn't been for Brace's benefit. It had been for Jag's. Brace understood the subtext. Don't hurt him, please, and don't be disappointed.

But Brace didn't care about the experience, or the lack of experience. He wouldn't force the younger man to do anything he didn't want. That included having sex. Brace was still pacing and double-checking the arrangements when the large clock in his room struck the midnight hour. The knock on his door came before the chimes had faded. Twenty-four hours. He had twenty-four hours to woo, to seduce, to make Jag Martin agree to stay with him. He didn't need a servant. He didn't need somebody to run his house. He didn't even need somebody for the sex -- he could find a willing partner when he needed it. He was tired of waking alone, sleeping alone, traveling alone. He hoped Jag would be the person who could share everything with him.

He took a deep breath and opened the door. The breath stalled in his lungs. Jag stood in front of him in the traditional marriage garb, but Brace barely noticed his clothes. The younger man had long black hair, tied back with a piece of leather at his neck, and the sharpest green eyes Brace had ever seen. He had a hawk-like nose, thin lips and high cheekbones. He looked like he was born to be a warrior. It was easy to imagine Jag leading a band of the barbarians from the mainland into the Peninsula, and those ancient bloodlines still ran in Jag's veins. Despite the sharp angles of his face, he was young. Older than Brace had expected, but an innocent all the same.

Jag's smile was shy as he murmured his greeting. 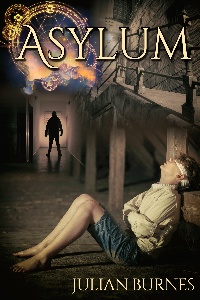