While patrolling his family’s ancient seat of power, The Crypt, lonely vampire Sebastian Gorefang spies two Fire witches drowning in the sea below. His curiosity piqued, he swoops down the sheer cliff in bat form to investigate. Drawing near he feels the undeniable pull of the Fated mate bond. Desiring nothing more than to share eternity with a companion, Sebastian rescues the pair of witches … only to discover that they are identical twins—and he shares the sacred bond with not just one of them, but both. 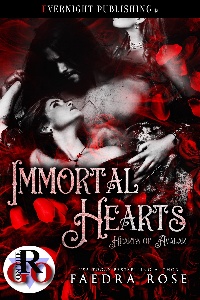 More From Hearts of Avalar

The moon rises, cold and distant, cloaked by dark, turbulent shadows—just like my heart. As pale as the moonlight itself, I observe the shimmering ocean from the battlements of my keep, The Crypt, a great castle hewn into the steep, solid, and immense obsidian cliff face of Avalar’s western coast that overlooks the Sea of Sorrow. Having originally crossed the sea to reach these shores, my forefathers aptly named these lands Sorrow’s End.

Burrowed deep into the cliff, my family sleeps peacefully in their crypts, knowing that they are safe on my watch. My mother and father slumber together, wrapped in each other’s arms, the very vision of immortal love. I sometimes visit them as they dream, and envy stirs in my heart. Of all my extended and great family, I alone … am alone. Without a mate to share my eternal life, I feel hollow.

The pleasures so relished by our kind have grown stale to me, and I yearn for a companion, someone with whom to covet the joys of immortality. I long for a precious beauty to treasure and call my own. Someone to warm my heart and bed. Someone who can see into my black soul and love me despite what horrors they witness there. But charged with the duty of guarding my kin, when would I meet such a woman? There is no opportunity!

Vampires have long been thought of as the monsters of Avalar. We feed on the blood of the innocent and guilty alike, venturing out only under the cover of darkness. The thirst drives us to unfathomably heinous acts of cruelty and devastation—not that we care. It is our way. It is what we are, what we have always been. We are proud creatures of the night, not self-loathing undead corpses of timeless memories and regret.

The witches steer clear of our domains entirely, and shifters skulk through our lands only when necessary, giving our keeps and crypts a wide berth. Though most are not old enough to know it, there are greater terrors that dwell in Avalar than vampires. But they are ancient, more so even than the Goddess most worship. But thankfully, they sleep, entombed beneath the waves.

Dragons. The thought of them sends a shiver down my spine. Dragonfire burns all, the stories of my kin whisper. No Element that exists can extinguish it. It burns until there is nothing left to feed upon. It stops only when it has devoured everything in its path, leaving behind a charcoal feast of destruction for the mighty beasts. The inhabitants of Avalar don’t know how lucky they are that we are their monsters, their creatures of nightmares and destruction. What death we could reap as a race in a single day would not compare to that of a single dragon.

Turning from the ocean, I sigh and prepare myself to walk the usual routes around the keep and the coast, ensuring the safety of my kin, when something catches my eye. A glint of firelight in the night. It gleams warm and painfully insignificant against the gloom of the open ocean.

My curiosity piqued, my predatory senses engage. Transforming into my giant bat form, I take wing, sweeping around the cliff face toward the waves. Two young women are flailing, drowning in the chaotic waves ruthlessly pounding the cliff face. One of them has her palm thrust up toward the sky, and in her hand burns fire. A fire without fuel? Witches! I realize. What in the name of the Goddess are two Fire witches doing in the Sea of Sorrow? Alone?

Seeing the two witches struggle in the turbulent waters stirs something in my soul, and it’s like the darkest parts of me suddenly burst into flame, rekindling the long-starved embers of my heart. Like a man possessed, I give in to the song in my heart and the instinctual need gnawing away at my belly. Diving down, I plummet. At the last possible moment, I back wing and snatch one witch from the water with my clawed feet, lifting her toward the stars and my keep.

After setting her down on the battlements, I waste no time retrieving the second witch from the surf. Laying her beside the other, I transform back into my vampire self and stare in awe. They’re twins. Identical twins. Flame-haired, fucking porcelain-skinned sisters of Fire. The witches stir vaguely, enough to splutter and cough, clearing the cold, briny seawater from their lungs. One of them makes fleeting eye contact with me before her cerulean jewels roll back in her head. She falls limp, passed out with exhaustion while the other instinctively reaches a weak, protective arm over her sister, before she too, loses consciousness.

They look so tragic, lying there together, sodden, half-drowned, and bedraggled. My heart inexplicably aches for them. They could—were they conscious—set me ablaze with a single thought, and yet the danger and risk serve only to solidify my will and my need for them. I will have them both, I decide. There is no other choice. They have come to me, practically to my threshold and into my waiting arms, seemingly delivered by Fate itself.

After scooping them up with ease, one over each shoulder, I carry the twins down from the battlements, into the heart of our subterranean keep, and to my personal chambers. Their skin, though warmer than mine, is icy for their kind. Resting them on the bed, side by side, I bite my lip as I gaze at their glorious, young forms, nipples prominent beneath their transparent, wet dresses.

The scent of their blood causes me to salivate and my fangs to ache, but I force the hunger down by sheer force of will. I have never before smelled such exquisite deliciousness in all my thousands of years. I close my eyes and swallow the urge to tear open their throats to sample their precious crimson nectar. No. They are mine. There will be time for blood, but it is not now.

After fetching two beautiful gowns from the family vault, acquired at some point centuries ago, I undress the twins and wrest them into the new, dry gowns before covering them over with my luxuriously thick duvet. Once I’ve lit the fire in the hearth, I retire to a plush, velvet chair by the window and settle down to watch over them throughout the night. 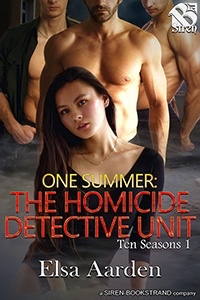