Man in the Middle (MMM)

Chase Morgan has known for some time that Taylor Foyt and Justin Ried are his mates. He just can't claim them. It would put their lives in jeopardy, and Chase would do anything to keep them safe, even deny the bond between them.

Justin is desperate for Chase to claim him and Taylor. Not only does he ache to be loved by the strong wolf shifter, but he wants Taylor to be safe. After years of abuse at the hands of the Teacher, Taylor deserves to have someone take care of him for a change, and Justin knows Chase is just the wolf to do it.

Taylor's heart sinks a little each day as he watches Justin pine for a man that doesn't seem to want either of them. He just doesn't have a clue how to convince Chase that they belong together.

When Justin decides to take matters into his own hands, Taylor and Chase are forced to work together to find the man. They hit one obstacle after another. If it's not assassins bent on destroying them out of revenge, it's discovering that there may be more to Justin than just his pretty face. If they each can get over their fears of commitment, then they might actually have a chance at a life together, assuming they don't die first.

Man in the Middle (MMM) 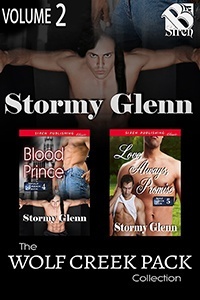 “What are you looking at?”

Justin glanced away from the window to look at his lover, Taylor. He gave a light shrug, feeling the longing he always felt when seeing the shifter. “He’s out there again, in wolf form this time.”

“How is that any different?” Taylor asked from behind Justin. “Chase is almost always in wolf form when he comes around.”

“He comes in human form sometimes,” Justin protested as he looked back out the second-floor window to the yard below. Chase Morgan was their mate, and both Justin and Taylor knew it. They’d known it for the last two months. Chase just hadn’t claimed them. Justin was beginning to wonder if the man ever would.

Justin had been waiting two months for the man to make a move, ever since he learned what a shape-shifter was when Chase rescued him. So far, nothing had happened. Chase didn’t even seem to want to be around them, unless he was in wolf form. He paced back and forth outside every so often, never coming close enough for Justin to think the man wanted anything more than to just catch a glimpse of them.

He was genuinely puzzled by Chase’s reluctance, but Justin had a theory that Chase’s wolf couldn’t deny the attraction even if the human side wanted to deny the fact. Chase’s wolf wanted to claim his mates. The human Chase had other ideas. Justin wished that the human side would shut the hell up and let the wolf side take over.

“Do you think he’s ever going to claim us?” Justin asked as he watched the beautiful grey wolf pace back and forth along the tree line. His movements were slow, measured, and Justin was in awe at how graceful the wolf seemed as he navigated through the trees as he paced the forest behind their home. Justin turned when he felt Taylor’s hand gently touch his shoulder. Taylor glanced past him and out the window then shrugged as if he, too, wondered the same thing.

“I don’t know, maybe,” Taylor said, and then he shook his head. “Then again, maybe not.”

“Do you think he doesn’t want us?” Justin asked as he watched the smooth, sleek lines of the wolf’s muscles as Chase circled around a tree and began to walk back down the small dirt path.

The back of Taylor’s knuckles grazed Justin’s cheek softly. “How could he not want you, Justin? You’re beautiful, sweet, loving, everything a man could want in a lover.” Taylor looked a little sad as he gazed out the window at Chase’s wolf form. “Maybe after everything that happened, Chase hasn’t claimed you because of me. I wasn’t exactly innocent in the Teacher’s schemes, you know.”

Justin shook his head frantically, refusing to allow Taylor to cradle the blame on his shoulders. “No, you didn’t do anything wrong.”

“Justin, not even Nate wanted to trust me.”

“He just didn’t understand,” Justin insisted. “You did what you did for me. You know that, I know that. Even Chase knows that. Besides, we come as a set.” Justin wrapped his arms around Taylor’s waist and laid his head on the man’s shoulder. “You’re mine, and I won’t give you up. I need you like I need air.”

“You do know that if Chase claims us we’re going to have to share, right?” Taylor asked as he smoothed Justin’s hair back from his face. “How are you going to feel about that?”

Justin chuckled as the image of all three of them together played through his mind. “I think that would be pretty hot, don’t you?”

Justin tilted his head back to look up into Taylor’s handsome face. “You don’t mind sharing?”

He leaned into the warm hand that Taylor cupped around his cheek. “As long as I never lose you, then I’m fine with it.” Taylor opened his mouth as if to continue then snapped it shut. He squeezed his eyes closed for a moment and hugged Justin to him. “I just can’t lose you, Justin.”

“You won’t,” Justin replied as he buried his face in Taylor’s neck and inhaled his musky scent, smelling the familiar scent that always brought him comfort. “A new love in our lives just means we have more love around us, not less. We just have to get Chase to understand that.”

“So, just what did you have in mind?” Justin felt Taylor’s eyes move over his body like soft silk sliding over naked skin. Damn, that man was good. He just had to look at him, and Justin was raring to go.

“You could start by taking off your clothes and bending over the couch,” Taylor drawled seductively. “Just rest your arms on the edge of the couch. I want your ass sticking out as far as it can go. And make sure you spread your legs. We want to make sure that Chase has a front-row seat.”

Justin grinned and hooked his thumbs in the elastic waistband of his pajama bottoms, pushing them down his legs. He didn’t have a shirt on, so once the pajama pants were off his legs, he was naked.

He bent over the end of the couch and spread his legs, sticking his butt out and wiggling it for Taylor. Justin glanced over his shoulder just in time to see Taylor shuck his own pajama bottoms. He groaned, the sight of his lover’s naked body making him ache with need. The man’s cock was so thick and so heavy. It was a deep red, and pre-cum was leaking from the slit in the blunt head.

His mouth instantly watered. It was a reaction he had every time he saw his lover’s weeping cock.

“Yeah?” Taylor asked wickedly. He wrapped his hand around his cock and gave it a few long strokes as Justin watched, his eyes nearly bugging out of his head. “You want some of this, honey?”

Justin nodded quickly, his eyes fixed on the hard shaft in Taylor’s grip, swallowing past the lump in his throat. He and Taylor had been together for a few years now. Taylor knew just what to do to get Justin going, and he was very good at it.

Justin tensed with anticipation as Taylor stepped closer and lifted a hand to caress his ass cheek. Taylor was just a few inches taller than Justin, but he was quite a bit bigger in the endowment department. Justin knew he would feel Taylor for hours after they made love. He couldn’t wait.

“Make sure you don’t hold anything back, Justin,” Taylor said as he dropped to his knees behind Justin. “I know I like to hear you, and I’m sure our audience would, too.”

At the mention of their audience, Justin’s eyes strayed to the patio doors. Just beyond the edge of the moonlight he could see a pair of glowing golden eyes staring intently at him and Taylor. It sent a tingle of excitement down his back to know Chase watched them.

He loved giving Chase a show, but Justin wished the man would join them. Gods, how he wished Chase would join them. Justin had never been with two men at the same time before, but he was pretty positive he would be able to handle the two.

The moment Taylor’s tongue stroked across his quivering hole, Justin forgot all about their audience and centered on the sensations igniting in his body into flames. Taylor knew how to play his body like a master, just what part to touch or caress, what noise to make, everything to send Justin right out of his mind and over to edge into insanity.

When Taylor’s hand lightly gripped his ball sac, Justin groaned out his pleasure. The noises escaping his mouth grew louder as his balls were gently massaged in the palm of Taylor’s skillful hand.

They reached a fever pitch when Taylor grabbed his cock and stroked it. Justin couldn’t keep from pushing himself in and out of Taylor’s tight grip, fucking the man’s tight fingers with enthusiasm.

Justin curled his fingers into the couch cushions with a tight grip to keep from reaching for Taylor and demanding that the man fuck him silly. He knew that they were trying to entice Chase, to give him a good show, but damn, he wanted to feel Taylor’s thick cock in his ass. He wanted the man to let go and show him just how talented a lover Taylor truly was.

And Taylor was talented as hell. He always left Justin a satiated, boneless mess when they had sex. But this had to be slow, seductive, and enticing. Justin wanted to scream he was so damn revved up and raring to go.

Justin jerked a little when the tongue in his ass was replaced by two lubed fingers. He hadn’t even heard Taylor slick them up.

“Easy, baby,” Taylor said softly as he started moving his fingers in and out of Justin’s ass.

Justin nodded, too far gone to complete a sentence at that point. He loved feeling Taylor in his body, either his fingers or his dick. Justin was a bottom boy through and through, and he knew it.

While he’d tried topping Taylor a few times, he was a dismal failure. He really preferred the bottom. He liked Taylor’s thick cock in his ass, making him go crazy as his lover fucked him into unconsciousness. The man was a god when it came to sex, and he loved having his ass pounded. Being on the bottom was somewhere Justin loved to be.

It also sent him over the edge faster than almost anything. Justin got off faster from the feel of a cock in his ass than he did from a blow job or a hand. There was nothing in the world like the feeling of a good hard shaft sinking into his ass.

Even now Justin could feel himself getting close to a mind-blowing orgasm. Luckily, Taylor had experience with his quick trigger. Justin felt a third finger enter his ass and quickly stretch him out. A moment later, they slid free, and Taylor grabbed Justin’s hips.