Shapeshifting police officer Bobby Pooch wants to build a stable life with the woman he loves, but working in the same department with Chantelle and his underlying feelings for Sam makes for a complicated situation, further marred by the inherent threats of their occupation.

The job has already left its mark on the human officer, Sam Sanders, his injuries affecting not only his ability to walk but putting him behind a desk and damaging his self-esteem. Little does he know his love for Bobby isn’t as requited as he believes and may turn Sam more than husky.

Chantelle Shepherd, also a shifter, wants both men to be happy, but that means convincing them of their love for each other and her willingness for the three to form the happy, secure family unit, for which they all yearn.

From “Hounding the Beat,” they move on to celebrating Christmas with plastic “Mistletoe and Whine,” their lives dogged by outside influences which threaten not only the relationships they’ve fought so hard to form but their very lives, providing them with plenty of “Paws for Thought.” Together these three stories leave no doubt Bobby, Chantelle, and Sam are in for Ruff Trouble. 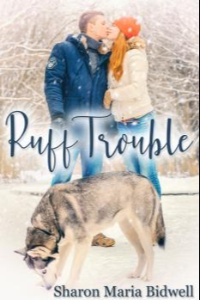 His fuzzy head recollected watching a movie, a few hands of cards. He didn’t recall finishing. Some remark ... a mention of ... oh God! Strip poker. He’d ignored them though his heart fluttered. Didn’t stop his friends, though. They continued playing and throwing back alcohol, grinning, laughing, all the while Sam’s mood growing ever more brooding and dark. Even without Sam taking an active part in the expanding the game, the couple had changed the way they played, swapping items of clothing and kisses, and other stupid forfeits as they lost hands to each other.

At some point, Sam opted out and sat leaning against the sofa, watching while the exchanges grew more heated. Kisses weren’t mere pressed lips, but duelling tongues. Hands tickled, groped. A pile of surrendered clothing grew. Bobby had scooped Chantelle onto his lap on the floor as she lost another hand.

“You did that on purpose.”

“Did too.” He’d smoothed back her hair, studied her face. For an instant they might have been the only two in the room, Chantelle down to her bra although she’d kept her undies and jeans, Bobby in his underpants.

Even now, Sam recalled his disappointment over Bobby winning the final round, having never seen his friend naked. He might now never get the chance. Not that the current view was in any way terrible. The man wore nothing more than boxers, the kind that clung; the cut gave his body an athletic outline, made Sam bite his lower lip.

The ghost of an image haunted him -- Chantelle in Bobby’s lap, Bobby’s fingers snaking into the wild tumble of her hair, kissing first her lips, before tilting her head back as she exposed her throat. Bobby fastening his lips and teeth there as if he would rip apart her tender flesh.

From her throat, he’d kissed to her breasts, and Sam had watched as Bobby eased her down, climbing over her, all the while kissing and licking her neck and chest. With his head swimming with confusion, Sam had moved from the floor to the sofa, nerves screaming for him to leave. To hell with the cost of the cab -- he should call despite the expense -- but he hadn’t been able to think straight enough to follow through. With no way to walk out, he was trapped. Fucking leg. No way to get far on the damaged limb and all the alcohol screwed with his brain. Still did.

The sole relief came at the end from closing his eyes, but he hadn’t been able to block his ears.

In his mind, it had been Sam screaming out, Oh Bobby, yes, right there. Impotent in every way but the one for which he wished, Sam’s attempt to tune them out had resulted in a single prayer: his best friends were not about to screw right there with him in the room.

If only he could forget, but the fog continued to clear from his brain and Chantelle’s soft moans came through to him even though they’d long ceased. Even though she weren’t in the room now.

Those sounds had called to something inside him, made Sam picture his helping Bobby pleasure the woman. He might do anything to please Bobby, and, although he preferred men, if he were to sleep with any woman, he’d choose Chantelle. The woman was too sexy for words. Few men, or women, resisted responding to her if she gave them her attention.

Lying tangled in a bed with sheets a mere day or two washed but distinct, smelling of the happy couple, he wasn’t sure he didn’t feel the same way right now. Why did they screw around in front of him forcing him to leave the room? Had they expected him to join in? Did Chantelle have a two-dick fantasy Bobby wished to make real?

Yes, Bobby. Anything you say, Bobby.

Did Bobby witness the notion in his eyes? Why did the man continue to stand there, staring at him?

Sam recalled his last words as he’d fled: “If you two are going to fuck around in here, I’ll go sleep in your room.”

He regretted saying it; certain he’d lost a chance at something he wasn’t sure he even had a right to hope for. He longed to apologise even if unsure of why he felt sorry. He couldn’t, too distracted by the persistent illusion Bobby had two contrasting eyes.