Aspiring fashion designer Melania Noble has her sights set on an exclusive contract with budding, chic retailer, Ramara’s Rags. With tragic experiences of domestic violence in her past, Mel doesn't want to waste a second not pursuing her dream and has no time for distractions, especially those of the all-consuming, arrogant male variety.

Haunted and determined to avoid the same mistakes of his dysfunctional parents, well-heeled architect Edge Ryan sublimates his thirst for kink with work. A chance encounter with rough-and-ready “Mel the car mechanic,” reveals what a poor substitute work has been. He’ll have his job cut out for him, however, convincing Mel to break her own dry spell and explore her inner submissive. 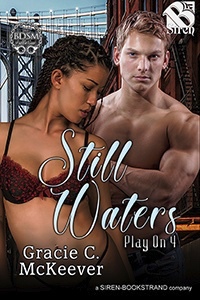 Instantly warm all over at the butter-melting timbre of his voice, Mel turned to see exactly with whom she was dealing. Sky-blue peepers stared back at her, unblinking. Her stomach fluttered, not in fear, but something else entirely. When her pussy muscles joined the party, involuntarily contracting at the hot male’s proximity, Mel was about through with her rampant hormones!

Arousal should have been the furthest thing from her mind. Not only was she shut in a car with a stranger—technically two strangers—but she normally didn’t have a thing for white guys. The dude sitting beside her, however, was gorgeous enough to cross racial barriers—wavy, chocolate-brown hair, long-lashed eyes, full, brother’s lips, and sculpted features—all causing her clit to swell.

Wait one minute! She didn’t have a thing for any guys, not for the foreseeable future anyway—black, white, or in between. Men were off-limits, too dangerous to her peace of mind and too much of a distraction. She didn’t have the time or desire to entertain a man, good-looking or not, as more than a friend. In her experience, any man willing to settle for friendship did so with the intention of changing a woman’s mind to become more than friends. She’d made the mistake of nurturing friendships with guys who ultimately just wanted to get into her pants or, worse, who proclaimed their love for her when she didn’t feel the same way.

He looked her up and down, scanning her body like a bar code, expression smug as his gaze lingered on her hips. “Your ass seems intact to me.”

“Ha-ha.” Her words came out a lot stronger than she felt considering she felt like someone had just zapped her with a pair of her father’s jumper cables.

“You two want to make a decision back there?  The meter’s run—”

Mr. Cab Thief silently put up a finger without turning to the driver. Just one finger and Bushy Brows shut his trap.

Cool trick, but the hypnotist act wasn’t going to work on her. “Look, mister man—”

“There’s no reason we can’t share. We’re going in the same direction.”

Well, yeah, but that was beside the point. She didn’t want any company, especially Mr. Cab Thief’s. His aura overpowered, eating up all the oxygen in the car and encroaching her personal space. Not to mention his cologne smelled delectable, subtle yet discernable and with the right amount of citrus-spicy scent to make her nostrils flare in appreciation.

“I’ll make it worth your while,” he murmured.

Mel’s sense of indignation went on high alert. How dare he? She put a fist on her hip and rolled her head on her neck in concert with her eyes. “Excuse me?”

He didn’t flinch, just flashed a dimples-revealing smile at her. “I meant I would pay your half of the fare. But if you have something else in mind…”

She bet he thought he was intimidating her with that shrewd look, his azure eyes probing her like an airport X-ray. Not to mention the sedate tone of his voice he probably thought lulled her into a sense of false security. He hadn’t raised it yet, just sat there in his expensive designer suit and tie, looking like the master of his domain, spouting orders-disguised-as-suggestions in that panties-creaming voice.

“I’ma do me.” Mel knocked on the partition, spouted her address to Bushy Brows, and glared at Mr. Cab Thief, daring him to dispute her.

He simply smirked and sat back in his seat, looking like some famous pasha, minus the mustache and hat.

Bushy Brows hesitated and shifted his glance from Mel to her cab mate.

Mr. Cab Thief shrugged his shoulders and said, “By all means, follow the lady’s directions,” as if giving his permission.

Mel didn’t know what irked her more, that the driver waited for Mr. Cab Thief’s okay, or that Mr. Cab Thief took the cab driver’s acquiescence as his due. “You’re not getting out?”

“Don’t have the slightest inclination to.”

Bushy Brows turned in his seat, started the car, and merged into the mid-morning traffic.

She had half a mind to tell him to stop until the interloper got out.

Okay, he wasn’t really a boy, though he didn’t seem all that much older than her twenty-five years. He was all man though—broad-shouldered, tall, sexy-as-sin with swagger to spare—and just bad news all the way around for Mel’s libido.

She sat with her arms folded across her breasts and stared out the window to her left. However, the wild antics of bike messengers wasn’t enough to curb new sexual awareness.

It had been a long time since she’d lusted after anyone, not since her ex, Lucien Williams, two years ago, in fact. Reminding herself how that affair ended helped her keep her libido in check…barely.

“What line of work are you in?”

She turned in time to see her cab mate nodding at her designs with his chin.

“Car repair.” She smirked, unwilling to volunteer anything personal, even if Mr. Cab Thief did look and smell like a piece of heaven.

He arched a brow. “Really?”

“Really.” She paused, questioning the wisdom of her next words, but her parents had raised her right. “And you?”

She’d have guessed Wall Street banker or high-priced attorney, but architect was white collar-y enough and above her pay-grade. She wondered if he was a partner in a firm or if he flew solo, then just as quickly kicked herself for her curiosity. She was not interested in this man, so it didn’t matter how he made his living.

Even as she thought it, a voice inside her said she could be interested.

Mel told the voice to mind its own business.

Edge firmly gripped her hips to hold her still and licked her slit from bottom to top before sucking her swollen clit into his mouth.

The desperation in her tone pleased him more than he wanted to admit. He was more of a sadist than he realized. “You’re strong. You can hold on.”

Her response this time was a groan, bordering on a growl that made Edge smile.

Purposefully, he slid a finger inside her again and curved it up toward her belly button, searching for that elusive little organ that would make…her…break…apart when stimulated. He stopped just short of rubbing it directly, gently caressed the vicinity, and listened as she whimpered at his tormenting. “Hold on, baby. I promise it’ll be worth it.”

“It better be.” She bit the lip he wanted to bite.

“That’s it, baby. Come for me.” He continued to finger-fuck her while she mercilessly rode his hand now, alternately bucking and gyrating her hips. Edge enjoyed the sight of her flushed face and body as the climax ran its course.

Her body vibrated several moments longer with aftershocks. Edge was fascinated by the intensity and length of her reaction, her pussy muscles clutching around his finger until she seemed to finally ring herself dry.

“Ready for round two?”

“I think you might be right.” Edge grinned. “But then again, it’s your fault.”

“I’ll take the hit.” She bent her knees, wiggling her hips like a matador waving a red cape in front of a bull. “I just want you inside me. I need you.”

“You always know the right thing to say to get your way, don’t you?” Edge reached for the top drawer of the bedside table and opened it. She’d told him she was clean and he knew he was, but there was another reason for him to use a condom besides diseases.

Edge distracted himself from her words and their meaning, trying not to overthink and make a big deal out of them as he retrieved and opened a foil packet as surreptitiously as possible. He told himself she wanted his cock inside her. She needed his cock just like he needed to feel her pussy milking him dry. Anything else was too painful to think about. Love didn’t last. He didn’t need her to love him, just to accept and entertain his kink.

His heart rebelled against the lie, pounding as he slowly rolled the rubber down over his stiff cock and centered himself with several deep breaths.

When he spread her thighs with his knee and positioned himself between her legs, Melania gasped then smiled. Her grin immediately faltered as he teased her folds with the head of his cock. He admired her control when he fed his cock an inch at a time before he retreated to start the process all over again. The next time he entered her and made it halfway in, however, Melania took control, wrapping her legs around his waist like a belt and drawing him close.

Edge put up token resistance, enjoying the feel of being trapped between her strong thighs before he plunged into her pussy balls-deep. He held himself still as his throbbing cock acclimated to finally being inside her hot, tight cunt.

She didn’t waste time following his command, moving so fast to settle her bound hands around his neck it was as if she had been sitting on edge waiting for permission all along.

Edge kissed her, driving his tongue into her mouth, mimicking the movement of his hips when he sank his cock deep into her pussy. He felt her fingers burrow through his hair before she drew him closer and met his dual thrusts with her own tongue and hips.

Melania simultaneously thrust against him as she dug her heels into his ass, trapping him in her grip so thoroughly he didn’t know where his domination began and her submission ended. If he had to be conquered and trapped by anyone, he couldn’t think of a worthier woman.

Edge released her to plant both his hands on the mattress. He rolled then began to piston his hips, pounding inside Melania as her pussy muscles squeezed him.  He added his thumb to the mix, rubbing her clit in rhythm to his thrusts. In no time, Melania shuddered, body bracing for the sensual wave that would sweep her over the brink.

He studied her face, loving the way her mouth parted on a soundless scream, and despite the blindfold, he could tell her eyes were squeezed tight behind it by the wrinkles forming in her forehead.

Edge rotated his hips as she matched his moves, her pussy milking him. He refused to come until she did and to say that there was a giant clash of wills between Dom and sub would have been an understatement. He felt her fighting against her climax as hard as he was fighting against his.

Ah, but sweet Melania didn’t know she was dealing with a master surfer. 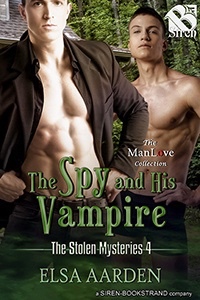 The Spy and His Vampire (MM)
Elsa Aarden
In Shelf
$4.99
Tweets by
sirenbookstrand