Verity Wheelwright lives a life of luxury but boredom. She is the only daughter to the widowed Lord Wheelwright, and he keeps her in his manor on New Lutetia, where she meets with tutors to learn classical literature and music. Verity craves adventure and often escapes to the pages of livre rouge—cheap, paperback books with crimson covers that contain sordid tales of lust and adventure. When New Lutetia is invaded by the infamous airship pirate Cavalier Eli Callahan, Verity is forced to make a choice. She can run and hide, or surrender herself in exchange for the safety of her city, but at what cost? 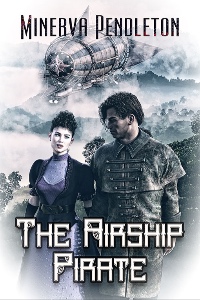 “Oh, Miss Verity. Lord Wheelwright wouldn’t want you reading something like that!”

Verity stopped rocking in her chair and looked over the top of her book at her maid. “No, Prudence. My father wouldn’t like me reading much of anything that he or my tutors haven’t personally selected and approved, and certainly nothing like this. Which is why you won’t be telling him upon his return, will you?”

“Yes,” Verity interrupted Prudence’s oft-practiced speech, “I know very well about your orders. You are, however, my maid, and while you may be in my father’s employ, you are directly beholden to me. Therefore, it would behoove you to keep a stealthy tongue about such matters.”

“But Miss, if he knew you’d been shopping the stalls in Cocotte…”

Verity closed her book and place it in her lap. “Prudence, you know very well that I would not stoop to visiting Cocotte or any of the environs around the air docks. I simply paid for a slight favor from the hall boy on his day off.”

“Prudence, you cannot, as they say, judge a book by its cover. While this may be a poorly crafted book, made of cheap red cardstock and even cheaper paper, for all you know it may be a ring of sonnets from Boudicia or a series of lyric odes from ancient Hellenia.”

Prudence bustled around the room, checking the levels on the warming engine in the corner, making sure the room was comfortable enough for sleep. “Yes, Miss,” she said, turning to the bed to make sure Verity’s night clothes were laid out properly for the evening, “only I know that your father’s library has all the known translations from Hellenia and most of the classical poetry from Boudicia. Furthermore, I know that you could afford a much better-crafted book on practically any subject at a respectable book merchant in Colline Riche, like Seth and Wilf’s or Chelonian Mobile. Any subject, I say, because I happen to know that my brother will occasionally pick up books similar to the one you’re holding for our nan and read them to her while they split a fifth of Geneva liquor between them. Such tales are rarely fit for the eyes of a lady such as yourself, Miss.”

“Well, I find such tales quite historical and educational,” Verity said, settling back into the chair.

“Do you, Miss? Then, may I ask, what tale it is that you’re reading? Just so I know what not to tell his lordship when he enquires about your independent studies.”

“If you must know, I am enjoying a historical novel.”

Now it was Verity’s turn to blush. “Devil Tooth Norton and the Bride of Encornet.”

“Miss! An air pirate novel. Set in Encornet? I knew the book would be in poor taste, but surely you see nothing of value in such…smut!”

Verity closed the book with her thumb marking her page and placed it in her lap. “It happens that I do, dear Prudence. First, I find the anatomical descriptions quite educational. My tutors have been quite mum on such subjects, and while I am versed in both Boudician and Clovisian literature, along with various classical texts, mathematics, and even musicianship, I am kept far away from the sciences, certainly those of human anatomy. Furthermore, while my father expects me to be a bride one day, helping to expand his qunubu plantation empire and provide him grandchildren to whom he will bequeath his lands and titles, he is rather remiss in explaining the particulars of human conception and reproduction.”

“Yes, Prudence. Normally my mother would provide me with such instruction, or an aunt. But seeing as my mother passed away giving birth to me, and both she and my father are without siblings, and seeing as my tutors avoid the subject at all cost, I am left to my own learning. A few liard to the hall boy to sneak off to the stalls of Cocotte is surely a sound investment if I am to learn anything about being a woman.”

Avoiding direct eye contact, Prudence busied herself by poking the coals in Verity’s fireplace, warming up the room slightly. “But Miss, I doubt any tales set in Encornet will teach you the virtues of being a woman.”

“Yes, Prudence,” Verity sighed, “it is true that the women of Encornet, at least the ones in this tome, are certainly soiled doves who have traded what few virtues they have for money and drink. However, from my understanding of marriage, a bride is nothing more than a harlot with a much more extravagant price tag that her husband pays to her father. A lady in Encornet may trade away her virtue for a few coins, while a bride may trade away hers for land and title, but ultimately the act of congress must be the same. I can’t imagine the parts, or their machinations, work any differently simply because the price is higher. And if this author is to be believed, a lady may derive much pleasure from such engagements if she handles herself properly.”

“Well, that may be true, Miss,” Prudence said, pulling the bed covers back for Verity and fluffing her pillows slightly, “but I’m not sure your father would willingly wed you off to an airship pirate. Certainly not one like Devil Tooth Norton.”

Verity laughed a bit too deliberately. “I have no intention of marrying an airship pirate, Prudence. And I’m sure I could never kiss a man nicknamed Devil Tooth, let alone marry one. No, I’m sure my father will set me up with some proper gentleman with copious land holdings on the New Continent, and I shall live out my life on some sweaty plantation producing babies and hosting tea parties for the ladies of the county.