The Secret Language of Flowers

Comhghall Harrington is a bookseller who is infatuated with his regular customer, Lady Laure Charmante. Due to their radically different social stations as well as Laure’s marital status, Comhghall and Laure can never, ever be together.

However, Lady Laure Charmante is no stranger to razing decorum or soliciting vice. Her passions for Comhghall run deep, and she very much wants to pursue a physical and intellectual relationship with him at all costs. To this end, she purchases a series of texts from him regarding floriography, the secret language of flowers, in an attempt to seduce him.

However, when a plague strikes the land, the two of them are separated and must communicate through writen and floral messages only. Lady Laure Charmante opens herself to him completely, admitting a deep longing for him by way of a floral bouquet. When he responds in kind, she invites him to her annual Halloween salon, hoping to make good on her proposal. When he responds in the affirmative, she is thrilled, but however will she get the poor man from Hibernia to drop his guard and his social pretenses and give into the lust that she knows he feels for her? 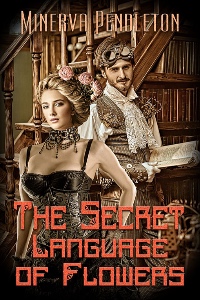 The Secret Language of Flowers

Leabhar Oscailte was a small book shop tucked quietly off a side street from the main shopping district of Plowonida. Even though it was inconvenient for a lady of means to visit with her escort guard, Lady Laure Charmante always made a point to stop in on her shopping days to visit Comhghall Harrington, the shop’s proprietor.

Mr. Harrington was a quiet, unassuming man with a tightly trimmed beard that Laure always wanted to bury her nose in. While he didn’t reek of a pungent scent like some of the more dandy men, he did take care of himself, and always had a light aroma of spices from some exotic land like Habash which, combined with the smell of old books, was a heady aroma for Laure. He routinely wore the modest clothes that one would expect of his station—nice wool trousers, a tweed waistcoat over a linen shirt, a simple morning coat, heavy leather boots. If there was anything that stood out about Mr. Harrington to make him different from the hundreds of other chubby, middle-aged men that populated the great city of Plowonida, it was the unique slump of his bowler hat, which sat on his head with a jaunty, cocked angle that was both eccentric and endearing.

“Good day, Lady Charmante,” said Mr. Harrington, tipping his hat to her with a slight bow.

“Oh, Comhghall,” tittered Laure flirtatiously, “how many times must I ask you to call me Laure?”

“Just once more, as always, m’lady,” said Mr. Harrington, blushing. Laure loved to flirt with him. She loved watching his cheeks redden and his voice dip into his native brogue which he was always so careful to avoid when dealing with other customers.

He tried to recover quickly. “And how is Lord Charmante?”

“Oh, well enough, I’m sure,” said Lady Charmante with a wave of her hand. Everyone knew that Lord Charmante had run away to live in sin with his mistress in the city of Lutetia on the continent. He had not been seen in Plowonidan society for years, and Lady Charmante was assumed to be, for all intents and purposes, an independent woman of means. It was considered polite to keep up the pretense of her marriage, but anyone who was anyone, and many who weren’t besides, knew that she was a free and independent woman who had what seemed like a limitless income to do with as she pleased.

Lady Charmante had taken to this new freedom like ink to paper and reveled in the eccentricities which it allowed her. She was a lady, to be sure, with lands, titles, status, and luxury, but was always at the vanguard of fashion, and often pushed the boundaries of reticence and decorum. She was known for lavish parties and brazen salons that most of polite society would scoff at publicly, but to which an invitation was secretly a prized treasure. Often these salons were for women only, and the evening’s entertainments were rumored to be salacious indeed.

Today, however, Lady Charmante had chosen a modest lavender dress with a princess silhouette that accentuated her curvaceous figure. She was not ancient, but she was seasoned woman with an ample figure to match. She was also unafraid of accentuating that figure with a well-crafted corset which served to highlight her corpulent hips and draw attention to her deep décolletage and the freckles hidden therein. She wore her long blonde hair curled tightly with a unique brass fascinator in the shape of a mermaid holding it back from her face.

With a wide, rich smile that was all too inviting for Comhghall, she asked, “I just happened to be out shopping, and I thought I would come by and see if you had any new offerings that might be of interest.”

“Indeed,” said Comhghall with another polite nod of his head. “Is there any topic that might interest you today?”

“I have heard of something quite delicious recently. Do you know anything about covert communications through flowers?”

“Floriography? Of course. We have a few books on the subject.”

“Do you? How intriguing. I’ve always thought that it would be quite entertaining to send other ladies secret messages via a corsage or adornments on my hat that their husbands wouldn’t know about. It would make for quite an amusing dinner party.”

“Well, m’lady, the flowers are traditionally sent between people more romantically involved, but I’m sure they could be adapted for secret communications at a dinner party. There are a few variations. Would you be interested in the Plowonidan tradition or the less known hanakotoba from Far Wakoku in the east?”

Comhghall was not only a businessman, but as most bookstore owners often are, a scholar as well. Though not formally educated, he was more widely read than most of the men Laure knew, and quite passionate about learning. She loved the way he could expound on any number of topics for a good ten or fifteen minutes if allowed. She could listen to him talk all day and would only want him to stop if she could do so by placing a long, passionate kiss on his lips. Still, even though she was a free woman of means and considered to be radically libertine by most of her peerage, the idea of ever consummating a physical relationship with someone in the trades and so far beneath her station was beyond the realm of even her dignity. That simply could never happen, and she would have to be content to flirt with him and try to seduce him with her revealing dresses.

She bent over slightly to allow him a closer view of her ample, freckled cleavage, and said coyly, “Romantically involved? How breathtaking. Tell me, Mr. Harrington, have you ever sent messages to a lady by way of the florist?”