The Trouble with Tiva (MF)

What’s a ski instructor to do with a naughty little student?

Jeremy Thompson is at the top of his game and loving his job. Surrounded by towering mountains and awe-inspiring slopes, life couldn’t get any better for an adventurous bachelor. Trouble is he’s having a hard time focusing on what he’s paid to do, when he would rather bump his sexy student over the bunny hill.

Tiva Dushku is a walking wet dream and a hazard to his job. During a chilly afternoon practice, Tiva takes a spill into the bushes, and when Jeremy comes to her rescue, she leaves him no choice but to teach her a lesson . . . 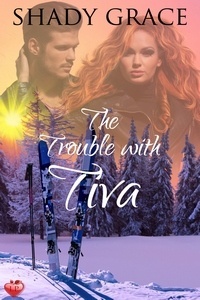 The Trouble with Tiva (MF)

Jeremy found a set of tracks going off the trail into a pine thicket, just below and to the right of the bunny hill. It didn’t take much deductive power to conclude Tiva had ended up down there. He sidestepped into the bushes and pushed the pine branches out of the way. Tiva was lying on her back with the back of her hand placed dramatically over her brow.

“Oh, there you are,” she said in her thick accent, eyes wide, mascara smudged. “I’m dying.”

Dying for something all right.

Chuckling under his breath, Jeremy tapped the binding of his skis with his poles, stepped off, and knelt by her feet. One of her skis had been ripped off in the fall; the ski that was still attached had jack-knifed in the snow. He removed the ski and patted her leg, checking for signs of injury.

“Did you hurt your ankle?”

Tiva lay back and parted her legs, providing him a clear view of the cleft between her thighs. He swallowed, ignoring the urge to reach out and skim his fingers over the seam and make her squirm. The woman was a danger to the male population.

He gritted his teeth and focused on her face. “Do you need help getting up?”

Her pretty blue eyes gazed at him with that hungry look he’d come to know well this past week. Nearly every time he looked at her, she was staring back at him with clear lust in her eyes. As far as he was concerned, she probably wanted his cock more than she wanted to learn to ski.

Tiva bit her bottom lip and smiled. That’s when he realized her little accident wasn’t really an accident at all. He should’ve known a sultry creature like her would set him up.

Although Jeremy felt an instant tug on his inner strings, her request put him in an awkward position. Edward was paying him to teach her to ski, not to fuck around. If he was caught, he had no doubt in his mind he would be fired. High Peaks did not permit sexual activity between instructor and student.

He decided to do the right thing. “I’m flattered, Miss Dushku, really, but I don’t think—”

She pouted and batted her lashes. “Don’t you want me, Mr. Thompson?”

You have no fucking idea. “I could lose—”

Tiva pushed up so quickly he didn’t have a chance to react before she wrapped her arms around his neck and pulled him down and on top of her. He sucked in a surprised breath just as her lips brushed against his, exploring, tasting, but it was her lusty moan that did him in. He was a man, and real men with wood to strike a match on couldn’t walk away from that much temptation.