Trouble comes to Thunder Creek the moment authorities arrest Winnie's son for stalking and terrorizing Lucas' daughter-in-law. Winnie feels guilty and withdraws from the Manning family. But a threatening phone call disturbs their lives even more as Winnie becomes an unexpected target.

Can Lucas convince Winnie of her worthiness and save their marriage? Or will danger and loyalty to her son further drive a wedge between them?

The warm water sluiced over their hot bodies in a rushing stream as they stood entwined in the tiny stall. Her kisses tasted like chocolate mint from the candy bars they’d snacked on earlier.

She poured a liberal amount of his shower gel into her palm. “Turn around.”

He did as requested, and she dutifully soaped his back. As her hands moved to soap his chest, she rubbed her breasts against him, and he shivered in response to the sensations rioting through his body. When her hands reached to soap his cock, he gasped, taking in a mouthful of water, which he promptly spewed out.

“Lady, you sure are full of surprises,” he said as he turned to face her, rinsing off under the spray before turning the taps off. He grabbed a towel and dried her body, his ministrations causing exquisite little moans to escape her lips. Quickly drying himself, he tossed the towel aside and wrapped an arm around her waist.

Side-by-side, they walked through to the bedroom where he could make love to her in comfort. He loved this woman. He’d shown her every day in every way he could, but the words themselves didn’t come easy, not since his first wife died and took a piece of his heart with her.

As they lay down, he cuddled close and worshipped her body with his hands and mouth, old memories pushed to the farthest recesses of his mind.

Her breasts spilled from his hands as he massaged their silky softness. “So damned soft. I could play with them all night long.”

She clutched his head urging him forward to taste her rosy buds. “Be my guest.”

He laved a tongue over a nipple, teasing before pulling it into his mouth, his hand pinching the other one. Her soft murmur of delight spurred him on. He let go of her breast, with a light bite, trailing kisses down over her abdomen to reach the honeyed prize nested in reddish curls. Her legs spread for him, the most feminine part of her open and waiting for his attention. 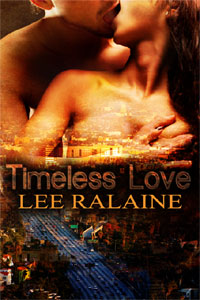