Whither Thou Goest (MM)

Sequel to Call Me Church

Johnny Smith's luck has been bad from the moment the Stock Market crashed and he'd been forced to leave an exclusive boarding school, and he sees no reason to believe it will ever change. But then he meets Church Chetwood, a dashing, devil-may-care director of motion pictures, and his life is turned topsy-turvy when Chetwood takes him along on what the man promises will be the adventure of a lifetime. Johnny doesn't care, as long as he's with his Mr. Chetwood.

The year before, Church had hired Captain Johansen to take him to the mysterious island of Iwi Po'o on the tramp steamer August Moon. There he'd found and captured a sabretooth tiger and brought the animal back to the States. "Chetwood's Kitty," so dubbed by the press, is the reason he has to leave New York so precipitously -- people had died and the law is after him. The only bright spot is the kid he'd come across in a saloon. Church thinks he's had the best idea of his life when he decides to take Johnny along with him to the South Seas. He and Captain Johansen plan to make a living transporting goods from one island to another, and they have every intention of avoiding Iwi Po'o.

But a treacherous stowaway has plans to take the August Moon for himself, and convinces the men to mutiny. Johnny, Church, the skipper, the ship's cook, and the wireless operator, accompanied by the little girl Johnny had rescued from prostitution, find themselves in a lifeboat, with Iwi Po'o the only spot of land. The last time Church was on this island, twelve men lost their lives to what lived there. Will Johnny, Church, and their friends somehow manage to make it our alive this time? 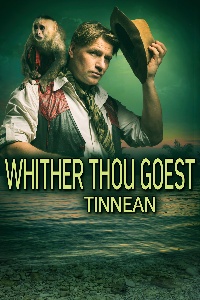 Whither Thou Goest (MM)

Mr. Chetwood and Nick began to walk quietly back the way we had come. I could hear a coughing grunt and the sound of brush being crushed underfoot. "Charley, keep an eye on little missy." I dropped the rucksacks and canteens and headed after the two men.

"Hey," Hildy whispered, indignant, "I can keep an eye on myself. I'm very self-reliant, you know."

"Sure you are, honey." I pulled the shiv from my pocket. "Stay with Charley."

The two men had parted the undergrowth and were observing the cause of the noise. I peeked over Mr. Chetwood's shoulder and gulped. "What is that?" I kept my voice low.

This creature ... it was huge, at least six and a half feet at the shoulder, and had horns ... I'd heard about Texas longhorn cattle, but this animal put them to shame.

"It's some kind of an aurochs, Johnny."

"This is what our cows are descended from."

"Are you sure, Mr. Chetwood? It doesn't look much like the cow I saw on a farm when my class went on a field trip."

"You never mentioned you went to school."

I never mentioned a lot of things. I gave him a slight grin. "I was in boarding school until the bottom dropped out of the stock market."

"You went to boarding school?" He sounded surprised.

"Until I was sixteen. My father was happier when I wasn't around the house."

"Oh, you mustn't thing that upset me. Truly. I was happier at school."

He growled something under his breath.

"Nothing. So you went on a field trip?"

"Yes. When I was ten, the headmaster arranged for my grade to visit a farm on Long Island. I'll tell you right now, I don't know anything about cattle, but this one looks plain mean."

He laughed, and I was relieved his mood had lightened. "You've got a point," he said. "If it takes a poke at you with one of its horns, you're just as dead as if one of the saber-toothed cats decides to take a bite out of you. Or the wolves or bears. I wonder what got this boy all riled up."

Something was pitched in our direction and just missed clipping us.

"Lillegard?" Mr. Chetwood patted my shoulder and pointed toward a towering tree-like fern that was a few yards away from us. "What are you doing up there?"

"That goddamned thing chased me up this tree. What took you so long?"

Nick's jaw dropped. "How'd you get up there? The lowest branch has to be ten, fifteen feet up."

"I dunno, I tell ya." There was tension in the harsh whisper. "I seen that thing, an' it come after me. Next thing I know, I'm up this tree. I been waitin' here forever. You! Chetwood's nancy boy! You go distract it so I can get down."

"Johnny, you move one foot toward that thing, and I'll tan your hide."

As if I believed my lover would strike me. He didn't have to tell me twice, however. "Sorry, Lillegard. Mr. Chetwood says I'm not allowed."