Wilde, Nevada is proving to be more troubling than Jessie imagined, when, just as she falls for one hot cowboy, feelings also spring up for his brother Phoenix. Though it’s crazy and not without risk, she can’t help but welcome his possessive embrace.

Phoenix knows she’s the woman for him─and his four brothers. But there are those in Wilde who want to destroy them. Phoenix must win Jessie’s love, or they might lose their hearts. And their lives.

NOTE! You are purchasing Siren's newest serialized imprint, the LoveXtreme Forever Series. This is Book 2 of 6 in the The Brothers of Wilde, Nevada collection. These books are not stand alone. Each is a continuation of the previous book and must be read in the numbered order. Each book may end on a cliffhanger but usually with a happy-for-now for the heroine and one or more men. The final book contains a happily forever after for the heroine and all her men.

4.5 CHERRIES: "Ms. Lang has a really terrific writing voice. She’s vivid and detailed without coming across and just trying to fill pages with flowery words. There is a point where Jessie is comparing Phoenix to the men she’s met in Manhattan and is noting the difference in their handling of women. Ms. Lang writes that “his manner was of a former era where women were spoiled rotten, cherished, and protected”. This is what I meant by vivid writing. You get a feel for the characters inside and out. Ms. Lang gives the reader brilliant insight into the thoughts of Jessie and Phoenix through POV changes throughout this short story. Readers better understand their emotions and motivation which breathes reality into their budding relationship. There are plenty of “awww...” moments in Wilde Fire. Likewise, the danger is still present in Wilde so the underlying plot by an unknown evil will keep the reader on their guard for the next “accident”. This reviewer was highly anticipating the first time Jessie would meet oldest brother, Austin. It was worth the wait and it was filled with terrific tension. Jessie has just enough submissive in her to tweak his Dominant side and before they part ways the reader knows that Austin is more than a little interested. Jessie is slowly accepting the fact that the brothers share her but is beginning to question their nontraditional tendency. Will she still be able to accept the brothers when she realizes they are looking for a forever kind of girl? And, did Jackson Wilde actually invent phone sex? Okay, probably not but you do not want to miss that conversation! If this is your first trip to Wilde it isn’t too late to go back and read book one, Going Wilde, to get a first look and how it all began. These books are written with one story flowing into the next so I highly recommend reading them in order. If you’re hooked into Siren’s LoveXtreme line like I am and if you’re looking for a really fun author to follow, pick up Chloe Lang’s Wilde, Nevada series. You’ll walk away a fan of the writing and an automatic buy for the writer." -- Honeysuckle, Whipped Cream Reviews

4 STARS: "WILDE FIRE, the second book in The Brothers of Wilde, Nevada series, begins to weave a solid storyline while still holding back enough to create a suspenseful read. A love hexagon with six lovers in one relationship, this book focuses mostly on the heroine's developing relationship with just one of the brothers. Like the first book, this is also a quick read with a fluid flow. Jessie, who had come to Wilde, Nevada to investigate accidents in the local mine, meets Jackson Wilde and his four brothers, Phoenix, Dallas, Denver, and Austin. After Jackson, whom she fell for in the first book, is called away on a business trip, Jessie spends time with Phoenix who charms her nearly as much as Jackson. And here comes the hot chemistry I felt was missing from the first book. Jessie and her men have an attraction that even her common sense won't allow her to fight. The sex scenes are filled with emotion and add to the developing relationships as her reactions to both men begin to overwhelm her. When Jessie begins to ask questions, the brothers know it's not much longer before they need to share with her the truth behind their lifestyle. But Austin is still holding out, convinced he doesn't want to share a mate as his family does so the other brothers work to prepare Jessie for Austin (I cannot wait for his book!). In the midst of this, the author is still providing snippets about the mine accidents and a potential danger. Several things happen in this book to indicate a threat and the suspense is building slowly. Now I am sold on the series and am eagerly looking forward to the next release. A quick notation that readers must read this in order because of the nature of the series... just go out and get them both because you won't want to read the first without having this one to start right away. It's just better that way." -- Rebecca, The Romance Reviews

4 CUPS: "I loved how much more I got to know Jessie, Phoenix, and Jackson in Wilde Fire compared to the previous tale. The emotional boundaries that Jessie has inside of her are explained in great detail in this story and it allows us to finally see why she is the way she is. The characters are strongly shown in this book and Ms. Lang has done a bang up job of giving us a very tantalizing tale. I cannot wait to see who is up next in this ongoing saga of the Wilde brothers and the very lucky lady who seems to be claiming all of their hearts one story at a time." -- Danielle, Coffee Time Romance 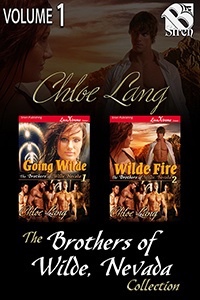 Jessie watched Phoenix pull off his clothes and toss them to the floor. Though she sat on the bed, her legs shook as she couldn’t help but scan his naked, muscled frame. He was overflowing with testosterone that seemed to be shooting out of him and into her.

A million thoughts rolled through her why this wasn’t smart. It wasn’t too late to end this now at oral sex. She crossed her arms over her chest and thought about what she could say to dissuade him. Nothing came to mind. He was like a man on a mission, with her as his target. Phoenix was the kind of man that took what he wanted. God, isn’t what he wants what I want, too?

When he shucked his white briefs, she gasped at the sight of his erect dick. It was a massive thing, at least nine inches long, maybe more. His cock had been inside her once before, but now she wondered how she’d been able to take all of it. And by the look on his face, he meant to be inside her body again. Though she felt vulnerable and a tiny bit scared, a shiver of desire shot through her, and her pussy dampened.

“I hope you like what this cowboy has to offer.” Phoenix grinned.

“I’ve been called worse, but believe me, this isn’t about a notch on my belt. You’re so much more to me than that. I can’t wait to feel your cunt clenching my dick.”

She sobered instantly to his explicit words that worked like an oven, heating her body. “Quite impressive, not that I’ve seen many.” Immediately, Jessie regretted revealing how inexperienced she was. Her cheeks burned. “B–but I’ve seen more than a few.”

Phoenix cupped her chin. “What a pretty liar,” he said with lusty reverence as he stepped next to the bed. “Did you forget that I know you lost your virginity just a few days ago? Remember what was said at Jackson’s house?”

“I guess I did forget.” She covered her face with her hands. “I can only imagine what you think about that.”

“There’s nothing to be ashamed of, angel.” He pulled her hands away from her face and kissed them. “I like that you haven’t been with other men.”

Her mind spun like a top, and her pussy ached for his touch. Crazy as it was, she couldn’t deny that even though she had feelings for Jackson, she still wanted Phoenix. None of it made any sense to her, but she couldn’t help herself. He was massive and powerful, and being next to him she felt tiny and protected.

She’d been a fool to save herself for her ex, Michael, who turned out to be gay. Had all those years of being pent-up created a craving in her that couldn’t be quenched? Maybe. Whatever. Phoenix’s offer to fuck her had her insides jumping at the chance.

“God, you’ve totally wrecked me for other women.” He sat down on the bed and began kissing her neck, his mouth warm and wonderful on her skin.

Still unsure about his truthfulness, her words felt breathy on her lips. “I find that hard to believe.”

“I’m going to make all your doubt disappear.” As he continued licking around her ear, his hands begin massaging her shoulders. “I’m going to start by tasting every inch of you, Jessie.”

He pulled her down until her head hit the pillow. His hands cupped her breasts, and he kissed her deeply on the mouth. He tasted warm and full of sin. Her toes curled, and her pussy ached. It felt strange, yet right, to be so free, so open. Her norm was to be sheepish whenever naked. But not with Phoenix. Something about his demeanor, his dominance, his control soothed any doubt in her.

Phoenix looked down at her like a starving man looking at a banquet. His eyes were aflame. He leaned down and captured one of her nipples in his mouth, teething the tip until trembles took hold of her. She loved his skill at giving her pleasure. He moved to the soft flesh under her arms and licked her there, causing every nerve to fire.

“That feels amazing.” She’d never thought of that area as an erogenous zone, but then again, she’d never had sex before coming to Wilde.

“You’ve got a lot to learn, and I’m the perfect teacher, angel.” He licked her sides, which normally were ticklish, but not now. Instead, it took her higher and deeper into wantonness.

His trailing tongue and accompanying fingers moved over her thigh and between her legs to her swollen bud. Jessie arched her back off the mattress as another climax rocked inside her for release.

Between licks, he ordered,“Come for me. I want to taste your orgasm. Give me your sweet pussy cream.”