When Lori Collins accepts an invitation to join a few old college friends for a Christmas Eve reunion, she doesn't think her former lover will be joining the group.

Chance Murdock is not only handsome, he's wealthy, reckless, and has no regard for authority--and he answers to no one--especially a woman who wants to change him.

Three years have passed since Lori broke up with Chance, but seeing him again quickly stirs her emotions and ignites her passions. Can she stifle her feelings and make it through the reunion? Or will she give in to the barrage of rising desires and let Chance coax her back into his arms? 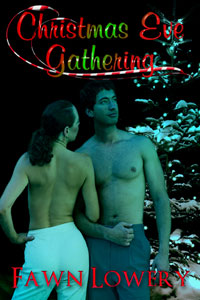 Voices singing Christmas carols filtered through the bathroom door. Lori's muscles were locked in a tight clench as she tried to hold Chance off. Her wrists were beginning to ache and she was certain her butt was probably bruised from being pressed against the sink for so long. His warmth seeped through his jacket and shirt and traveled up her arm. Still, she refused to let him get any closer.

"I want you to leave," she said, her voice raspy.

"I don't want to leave, Lori. I said I had something to say and until you listen, I'm not going anywhere."

She sighed and brought her gaze up, then quickly realized there was no way in hell she could look him in the eye and listen to anything he had to say. "So say it and get out of here. The others are going to realize we're off somewhere together. When they find us in here--"

"I don't give a fuck what the others think." He released a long breath and grasped her wrists, forcing her to pull her palms off his chest. In the next second, he hauled her against his chest and wrapped his arms around her waist. "And that's enough of this standoffish behavior."

Lori gasped and raised her gaze to his face. He could read her so well. How in hell could he know her thoughts and counteract them so quickly? She struggled in his embrace, hating the muscular feel of his body pressing so tightly against hers. "Turn me loose. I don't want to be this close to you."

His voice was low and his breath puffed hotly against her cheek.

"I am not!" Oh God! He feels like heaven pressing into my body.

"I want you. I want to take you right here."

He moved so quickly she couldn't comprehend what to do. Aside from screaming, the only thought that came to mind was slapping his face and she knew that would have little effect on him. Besides, she didn't have any strength left. All her energies had been put into trying to adjust to seeing him again and overcoming her lusty feelings.

Chance delved one hand beneath the hem of her sweater as he lowered his head and took her mouth.

Lori gasped and tried to resist, but he pressed his lips tightly against hers while he slid his hand around and captured one breast. She stifled a moan when his fingers found her nipple and stroked it. Heat surged through her insides as he pressed his abdomen into her belly. Ropy muscles beneath his shirt begged for her touch and for a split second, she wanted to allow her emotions to take control. Dammit!

She felt his hand leave her breast and skim along her side, lower to her hip before inching up her skirt. She stiffened and tried to pull her mouth off his but he just tightened his arm around her waist and held her immobile. His palm touched her thigh as he pulled her skirt up. She shivered uncontrollably, realizing he truly intended to have sex with her right there in Anita's half-bath.

He hasn't changed one damn bit. He's still reckless and acts on impulse. She squeezed her eyes shut, realizing that tears were forming. The situation was out of control and God help her, she didn't want him to stop. Her senses reeled out of control when she felt his hand at the waistband of her pantyhose. In one quick motion, he thrust his hand inside the filmy garment and went straight to her crotch.

Lori fought the onslaught of emotions that surged forward. Memories of incredible sex shot through her mind making her hate the fact that she had ever broken up with Chance. For too long she had gone without male companionship and now he was reminding her just how damn much she missed having him around.

His fingers were urgent on her clitoris, rubbing hard and quick, bringing her to the brink of orgasm before he pushed her nylons off her hips and lifted her to the sink. He pulled his mouth away, giving her time to catch her breath.

"Oh yes we can, babe," he said, his breath coming in short pants. He slid one hand into his pants pocket and pulled out a condom. Quickly he tore the wrapper and unzipped his slacks. His cock poked through the opening and Lori lowered her gaze. She dragged in a ragged breath. The urge to jump off the sink surfaced but she pushed the sensation aside. If there was one thing she wanted that very moment, it was to have Chance Murdock thrust his long cock into her needing body. She adjusted her seat on the edge of the sink, opening her legs while he hurried to roll on the condom.