When Lieutenant Kina Tamar graduated with honors from the Starfleet Academy, she was aiming for a pilot berth aboard a premier warship. Her dreams are shattered by backroom politics and she ends up skippering a Starfleet freighter. Bored beyond belief, she’s about to resign when she’s implicated in a smuggling ring.

The officer sent to interrogate Kina is Colonel Jake Lancaster—her charismatic instructor from the academy. Soon there are shadowy assassins on Kina’s trail, and she’s on the run with Lancaster. Along the way, she cracks the hot colonel’s resistance and enjoys a wild night of lust. Later, when she learns the truth about the Christmas tragedy that destroyed her family, she’s forced to make a devastating choice. 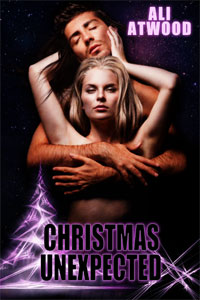 Now, after the droid waiter had returned and cleared away the remains of their meal, Kina was wondering if Lancaster was trying to keep her focus off the fact they were alone in a hotel room. Not that she thought there was chance he had a secret interest in her. For all she knew, he could be married or seriously attached. Unfortunately for her self-control, he’d loosened the top of his uniform tunic and she couldn’t keep her gaze off his strong bronzed throat, wondering how it would taste if she licked it. It didn’t help that the beds were just a few feet away, and at some point they’d probably be moving onto those beds to get some rest. Then again, if she knew for sure he was taken, that would kill her obsession and her hormones could stand down—she’d never knowingly slept with a mated man. “Since we’re here,” she ventured, “maybe we could exchange some personal details.”

His violet-colored eyes came up to study her for a moment. “What would you like to know?”

“Where were you born, to start?”

“Do you still have family living in Seattle?”

He took a sip of wine before he replied, “Yes, my folks still own the house I grew up in. Dad’s a retired general and mom teaches art in junior school.”

“Three, a younger sister who’s still in college and two brothers, both pilots with Starfleet.”

Kina noticed how his eyes warmed as he spoke about his family. The more she knew about him, the more she liked and respected him as a man. “You’re very lucky to have a large family. I suppose you’ve read my history?”

He studied her over the rim of his glass. “I did, yes, a tough break for one so young. It’s remarkable that you survived.”

Kina rarely spoke of the tragedy that had taken her family when she was a toddler. Rescue workers had found her wandering amidst ruins of her town, a victim of an air raid mounted by the rim planet’s insurgents. The attack had happened during the Christmas holidays, killing generations of families who had gathered together. Kina had no clear memory of her family, merely a sense that she had been loved.

“Since no one came forward to claim me,” she explained, “the authorities assumed my entire family had perished.” She shrugged. “I don’t even know my real name.”

Lancaster’s eyes were full of kindness now. “How did you end up being Kina Tamar?”

She wrinkled her nose. “Apparently the matron at the state home asked me if I knew my name, and I babbled something in toddler talk that sounded like Kina Tamar. So that’s how they logged me into the system.” As she spoke, she was wondering what had possessed her to bring up her history when she wanted to talk about his. She waved a dismissive hand. “Sorry, I don’t usually unburden, because people don’t know what to say to comfort me.”

“I’d say you’re a fighter who survived the system and made something of herself.”

The unexpected compliment sent a warm glow through her. She cleared her throat. “So do you still think I’m a smuggler with accomplices trying to kill me?”

He smiled a little. “I never did. Since you were fresh into the academy, I knew you were as straight-arrow as they come, but charges were brought against you and I had to go through the motions. I wanted to keep you at the base for your own protection.”

That was all good news, but she barely heard the words. On a deeper level, she was suddenly aware that alertness flickered behind the kindness in his eyes. With that came the tantalizing notion that he might actually be attracted but hiding it. What the hell, nothing ventured… “Can I ask if you’re married or attached?”

Knowing he was single was a wonderful relief, but now she had to wonder if he was heading her off because he wasn’t attracted, or he didn’t want to take advantage of the situation, or he was afraid she would try to make more of it. Whichever it was, she didn’t care if he thought her shameless. This was an opportunity not to be missed. “I assure you, I’m not looking for anything more than one night in your bed…”

Matched to the Wolves (MFM)
Cara Adams
In Shelf
$5.50
Tweets by
sirenbookstrand