Rustin has his Associates Degree and leads a successful life as a retail store manager. He’s dissatisfied, though, and wants more. Afforded an opportunity to complete his education while working as a bartender at a trendy gay club in New Orleans, he leaves his Michigan home behind. He’s barely off the plane when he encounters Dutch, a Texas cowboy who is visiting the city on business. Will the connection they share that weekend lead to a lasting relationship, or are they destined to go their separate ways to pursue their own destinies? 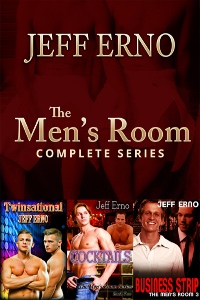 “Sweet,” Deejay said, smiling and nodding in approval. “They’re gonna eat you up.”

Colby was on the bar, strutting back and forth as he demonstrated his newest dance moves. Wearing only his tight-fitting jockeys and a pair of sneakers, Colby was one hot number. He jumped down from the bar and landed smoothly beside Deejay.

“Aw, thanks,” he said, placing his hand on Deejay’s hard chest. “I’m glad you liked it.”

Deejay continued to smile at him. “You’re a flirt, you know that?”

“Don’t be coy,” Deejay said as he leaned in and kissed the dancer on the cheek. “I love your moves, Colby, but I’m already taken. And I don’t cheat.”

“Who said anything about cheating?” Colby used his index finger to trace a line down the center of Deejay’s chest, stopping just above his navel. “Tommy’s a little a cutie. Bring him over sometime and the three of us can—”

The front door opened before Colby could finish his sentence, and in walked a tall blond cowboy. Colby spun around, his train of thought interrupted. “Howdy,” he said enthusiastically.

“Are ya’ll open?” the newcomer said as he approached the bar.

Deejay smiled at him warmly, stepping away from Colby. “Sure,” he said. “Can’t you tell?” At two o’clock in the afternoon, the bar was completely empty. “Have a seat,” Deejay said with a wink. “I’m just messin with ya. This is the slowest part of the day. What can I get you?”

“Not a problem. Actually, Colby here is supposed to be tending bar, but since we had no customers he was showing me his new dance moves. He’s one of our go-go dancers.”

“Hi,” Colby said, squaring his shoulders and straightening his posture.

“I’ll let you two get acquainted,” Deejay said, excusing himself. He pulled out his cell phone to check his messages as he stepped into the storage room. Tommy had texted him to let him know that Rustin had arrived. He punched the call back button and waited for Tommy to answer.

Tommy chatted with him for a moment, telling Deejay he and Rustin were just hanging out together getting the suitcases unpacked while Rustin settled in.

“You guys wanna come down? I’m about done here for now. We can grab a bite.” Tommy said they’d be down in a few. “Okay babe, love ya. See ya when you get here.”

Deejay headed down the hall and entered his office, which doubled for a dressing room. The dancers used it every night to change. He smiled to himself as he looked down at the desk, cluttered with unopened mail and junk. He remembered clearing off the desk one night rather hurriedly in order to use it for personal business. That was the night he’d fucked Tommy for the first time.

The music had been loud in the bar, yet still Deejay had to hold his hand over Tommy’s mouth. He was screaming so loudly, and his shrieks were anything but cries of pain. Deejay reached down and rubbed his crotch as he recalled the way Tommy had begged him to fuck harder.

It was just one of those things that Deejay could not explain. He knew from the moment he laid eyes on Tommy that he was the one. Part of it was that Tommy was his “type”. Deejay liked slender guys—especially if they were cute—and Tommy had the most adorable face. He was a bit nerdy, but in a very endearing manner. And Tommy had that sweet little bubble butt and that narrow, twenty-eight inch waist. Deejay loved wrapping his palms around the side of Tommy’s hips and drilling that tight ass of his.

He’d better clear his head before they got to the bar. Already he was sporting a hard-on. He toyed with the idea of rubbing one out real quick before they arrived but decided to hold off. It’d be all the hotter later on when he finally got Tommy alone. Instead he focused on tidying up the office a bit.

Deejay and Tommy had vacationed in Michigan a few earlier ago, where they’d met Rustin. The three of them hit it off, and Deejay thought at the time how great Rustin would be at the Men’s Room. He had an outgoing personality and seemed to always be happy. His cheerful smile was welcoming, and this sort of demeanor was not a characteristic that was easy to find. It was going to be a pleasure to work beside Rustin and train him to tend bar.

Not only did Rustin have a great smile, but he also had a great body. He was going to look fantastic on those nights when the bar got crowded and sticky hot, when most of the staff stripped down and worked shirtless. If Rustin were so inclined, he could easily become one of the go-go dancers. The possibilities were endless, but Deejay that Rustin’s real desire was to simply start life anew. Moving away from his small hometown was a big step for him. He’d be able to embrace his identity and be who he truly was.

Deejay knew exactly how important it was for Rustin to find his own way. In the past, he had helped other guys like Rustin. Coming out as a gay man wasn’t easy for anyone, but the situation was always worse when there was no family support. Deejay was committed to providing this kind of unconditional acceptance to guys like Rustin.