It is October in Arcadia and shape shifter Talia Coe is now the proud mother of twins, Mahra and Aaron. As Talia and her mate Lucas Knight plan their November wedding and try to adjust to parenthood, Talia is again plagued by nightmares of doom and disaster. Their archenemy, Abby Stewart, is still at large and they know it will only be a matter of time before she returns to exact her revenge.

Victor Kane and his lover Caroline Thomas are struggling to maintain their rocky relationship in spite of their feelings for other people. Victor has finally acknowledged his love for his former mate, Lilah, who is Talia’s mother. Lilah struggles with the hard truth that she loves her husband, Caleb Sinclair, but is in love with Victor. Caroline is still seeing Neil Wade, who became her lover when Victor was on the run from murder charges. However, Caroline feels she has too much to lose if she leaves Victor, since she is now a partner in his prosperous art gallery and they have a son together. Ben Walker, a shifter hunter who has joined forces with Lucas’s pack, has settled into a comfortable life in Arcadia, working for Victor and Caroline at the art gallery. He’s also become smitten with the new DA, Lana Russell. Little does he know that beneath the surface, the cool, blond beauty is not what she seems.

When Lucas is almost killed by a hit and run driver, it looks as though Abby Stewart, out to destroy Lucas, Talia, Victor, Caroline, Neil, Caleb and Lilah, has begun her campaign of vengeance. But she isn’t in it alone and after someone close to Talia is killed and another is critically injured, it becomes clear that others have joined in the vendetta. As evil forces hover over Arcadia and the final battle looms, unseen enemies reveal themselves, loyalties are tested and lives are lost. Who will survive? 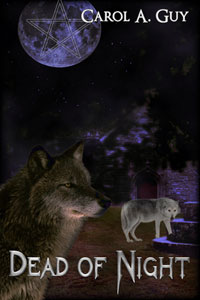 “What the hell are they doing here?” Talia asked, her voice full of disdain.

The detectives conferred with two of the firemen who were now walking around in the charred remains of the cottage. The rest of the fire crew members were coiling up hoses and putting away other equipment.

Lucas decided to join them. “Stay here,” he told Talia.

“Forget it, Lucas.” She followed him across the yard to the blackened ruins.

The man who came to greet them had the words Fire Chief emblazoned across the front of the hard hat he wore. “You’re the owners?” he asked.

“Looks like an explosion,” the man said. “I’m Chief Hennesy, by the way. Sorry for your loss.” He took off one of his heavy, soot-coated gloves.

Lucas shook the man’s hand. “Was it the gas line?”

Chief Hennesy suddenly looked a little uncomfortable. As if on cue, Muncie and Reed joined them.

“Someone blew up your house, Ms. Coe,” Muncie said, his gaze fixed on Talia.

Chief Hennesy quickly said, “There are remnants of an explosive device, a timer to be exact. We’ll know more when we get the items to the lab in Kinnard. They’ll be sending an arson investigator to inspect the premises.”

Talia looked as though she couldn’t quite take it all in. “Someone did this on purpose?”

Lucas found it hard to swallow around the lump of fury in his throat. Then it hit him. I was supposed to be staying here tonight, just like I’ve been doing. This was meant for me.

The same thought must have occurred to Talia because when she turned to him, he could see the terror in her eyes. “My God, Lucas, you—”

He silenced her with a shake of his head. “So you’re on the arson squad now?” He was addressing Muncie and Reed.

Reed answered, “We just heard about the fire. We’ve been tied up on an assault out on Carver Road. A man was almost killed. In fact, he’s not expected to make it.”

Muncie took over. “We were on our way to tell you, Ms. Coe.”

Talia looked from one detective to the other. “Tell me what? Stop playing games. I’m not in the mood!”

Lucas knew. Deep down, he knew. He put an arm around Talia’s waist, holding tight.

As Talia’s body began to sink, Lucas took her in his arms. “Two alphas in one night, that was the plan,” he whispered in her ear.

Menage on the Prairie (MMF)
Xondra Day
In Shelf
$4.99
Tweets by
sirenbookstrand