Hannah Janes loves two men. Slim is a ghost trying to earn his way to his eternal rest. Bolt Carmody is a scientist with a mother who detests Hannah and a sexpot neighbor who wants him for herself.

Slim tells Hannah stories of her ancestor, the first Hannah, and her sexual exploits with five men she considered her husbands. Modern day Hannah is aroused and aches to enjoy both Slim and Bolt. Convincing Bolt, her longtime love, to accept her love of a ghost will not be easy. Outwitting his neighbor and his mother to keep his love may be impossible.

As Slim struggles with telling Hannah what he has done to earn eternal unrest, Bolt struggles with resisting his urges toward the persistent neighbor. The warnings of Bolt’s mother about Hannah’s fitness gain credence when Hannah asks him to engage in a ménage with the ghostly spirit who lives in her family’s defunct gold mine.

Hannah’s heart was beating fast as she approached the mine. At the entrance, her curiosity overcame the apprehension and she forged ahead. For the first several feet, the channel was straight and sunlight guided her. Then a sharp turn plunged her into darkness. She switched on the flashlight. After a few feet she encountered a fork and stopped. With Bolt, she hadn’t paid attention to the route. She’d let him lead. She closed her eyes, trying to visualize which path they’d taken. Nothing came to her, except when she opened her eyes again a faint glow appeared deep inside the left-hand fork. She went left, but the glow had disappeared.

A few steps more brought her to a boarded-up passageway and she had to turn. Dammit, she should be making a map. Hopefully, she’d remember and could make one when she got home. The mine opened up suddenly and she found a boulder to sit on, possibly the same one she’d sat on yesterday. She felt a twinge of guilt. Bolt had  been texting her all morning and she’dignored him. He’d only worry if she told him what she was doing and she could never lie to him. He always knew it when she tried .

The rock became uncomfortable after a few minutes. What was she doing this for? She’d heard about a ghost in the mine all her life and had never believed it. Maybe her imagination had conjured him up yesterday and he’d never been there at all. A few more minutes and then she’d leave. What had she hoped to learn from the guy anyhow?

That was a question easy to answer. Her namesake ancestor, the first Hannah Brown Tolliver, had always fascinated her. Her mother had been named for the woman. So had Hannah, although her last name wasn’t Tolliver as her mother’s maiden name was. The stories about the very first Hannah  seemed so outrageous they couldn’t possibly all be true. Supposedly, the woman had had lovers too numerous to count. That was the hush-hush part of her great-great-great-granny’s life. The part for publication touted her humanitarian efforts and the way she’d worked to clean up the Barbary Coast and her efforts on the part of downtrodden women. They extolled her business acumen and the way she’d seen the prospects and built up a real-estate gold mine worth as much or more than what they’d pulled out of the actual mine.

“I hoped you’d return. It gets awfully dang lonesome for a cowboy down here.”

Hannah jumped and couldn’t still her racing heart or find her voice for several seconds. “So, you were actually here yesterday. Are you real?”

The spirit laughed a hearty laugh that echoed off the walls of the mine. “Real? I’m real as in human. I have substance when I wish to, but I haven’t been real in the sense of being alive for many years.”

“So, ghosts do exist.” Oddly, Hannah had no fear of the spirit . Arms folded in front of her, she circled him  to view the apparition  from all angles, as if choosing the prize bull at a state fair.

“Apparently we ghosts do exist. At least I do. I don’t know of any others, though, and couldn’t swear to their existence. Never believed in the things, myself.”

“Who are you or I mean, who were you?” Hannah sat on the rock again, ready to hear some stories. “Are you my grandfather many generations removed or are you one of Hannah Brown’s other lovers?” Hannah hoped he’d say yes and she could hear some juicy stories.

“Ah, so you know about Hannah’s penchant for taking lovers, or husbands as she always referred to them.” He walked around her this time and bent to examine her face at closer range. “I thought you were my Hannah  yesterday. The resemblance is scary.”

“Can a ghost be scared? Do you have emotions? Can you see the past? The future? Do you ever leave the mine? Why are you here? Did you murder somebody? Did somebody murder you? Are we related? Who are you?”

His laughter bounced and echoed off the rock walls. “So many questions. I’ll tell you this much. We are not related in any way. I don’t wish to reveal my identity quite yet since I don’t wish to scare you away.” He walked away from her, stroking his chin.

He was a handsome cuss. His blacker-than-black hair with eyes to match should have been off-putting, but Hannah wasn’t a bit skittish around him. His wide shoulders and tall frame should have been intimidating to a woman only a bit over five seven who weighed at least a hundred pounds less than he did. Or did ghosts weigh anything? Hannah stopped her scrutiny when he turned to stare at her again.

“Your company amuses me and I have so little to look forward to. But I’ll tell you this much, I have been in love with one of the many Hannahs that have come and gone from this earth.”

“Oh, dear, my family has had a Hannah in every generation. I had hoped you knew the first Hannah and could tell me the truth about her life. If you were with one of the later Hannahs, you are a big disappointment to me.”

“I promise not to be a disappointment. I can tell you anything you want to know about Miss Hannah Brown of Plantsville, California.”

She swallowed her scream and nodded that she understood. “Do what you want with me, Master. Do what makes you happy and I will be happy for you.”

“That’s the way my pretty little kitten should speak to her Master. I am considering letting you come. First, however, we will continue with the test of sensations I have devised especially for you.”

Something soft and furry touched her cheek. It traveled down her neck, circled her breast, and patted her tummy. He was holding something in his hand with fur on it. But, what was it? He had only gone as far as her dressing room. She tried to remember what clothes she kept in the wardrobe. She had several garments with fur collars but they were all attached and would have taken more time to rip apart. This fur piece was small so it couldn’t be a stole or a fox collar.

He massaged her pubic area with the fur, and trailed it down her left thigh. The sensual touch as he rubbed her skin with fur put her into a stupor. She didn’t want to think, only to feel. She longed for a climax and let out an involuntary mew of pleasure. She tensed. Would he punish her for it?

He chuckled. “It’s okay for you to enjoy this. I want you to feel good and to want my cock inside you. Just breathe and feel.”

He massaged up her thigh, back around her pussy, and down the right leg. When he moved the fur to her foot that gave her a better idea of its configuration. “It’s my fur hat, the one that matches my jacket.”

The foreign object in her bottom caused her pain as she landed on it, and her backside, raw from the spanking, hurt when it scraped the bed sheets. The knowledge that she would soon have a cock in her minimized the pain. Rocco removed the nipple clamps to suck on her breasts. Abruptly, he scooted onto his knees at her head. “Give me a few licks for moisture. Only a bit of a suck because I want to come inside you.”

She wished her hands were free to slap him. Her pussy was so wet, she was sure she’d left spots on the sheets. Besides that, he would wear a rubber as he always did. This was an excuse to delay her pleasure and see if he could goad her into complaining so he could punish her again. She held her temper in check and licked around the head of his cock to moisten it before drawing it into her mouth. She then slurped it all the way in as far as she could take it and sucked. He wouldn’t come from this because he’d nearly drained himself on her already. He let her go on sucking until he grew harder and harder. At that point, he quickly pulled out of her mouth.

“You are a devil.” He readied himself with a condom, moved between her outstretched legs, and plunged deeply into her.

She moaned with pleasure. At last. He felt huge inside her and she pulsed around him for her own pleasure, not his.

He pressed his fingers into her ass sending jolts of pain through her.

“We wouldn’t want you coming too fast, would we, darlin’?”

“No, Master. Thank you, Master, for not letting me be so greedy.”

“You are welcome.” He fucked her in earnest, then, and try as she might, she couldn’t hold back. If he didn’t give her the okay to come soon, she’d be in for some horrible punishment. She’d held it so long she thought her insides would burst.

“You may reach your orgasm now, darlin’, if you wish.”

If she wished? If she wished? Castration was too good for him, but she couldn’t think of revenge now. She wanted her reward. She used her muscles to tighten and release around his cock. Oh, it felt good. She swiveled her hips from side to side to feel all of him. Then she pulsed and pulsed until the world went black and only feeling in her groin remained. Her spasms around him tightened and she came and came and came. 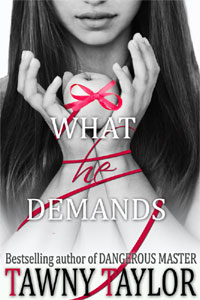