Ellen decided to try Internet dating until her daughter invited her to a lumberjack competition in Northern Wisconsin. Even though Ellen knew her daughter wanted to screen the men she met, she decided why not?

Buck's friends and family have been pushing him to start dating but all the younger women he's been with have left him cold. The suggestion of an older woman came as a preface to seeing the ad for a weekend with one of the D-O-L-L-S. Little did he know that a cougar like Ellen could become one great lover.

Ellen Drake sat in front of her computer, contemplating the adventure she and her friends planned. Last month, Grace found a younger man and made her own fireworks for the Fourth of July. Ellen originally wanted August as her month, but now it didn't seem such a hot idea. With absolutely no idea where or how to start, she returned her attention to the program for online dating flashing on the computer screen and she began to panic.

She'd been widowed since the age of twenty-seven. At the time of Howard's death, she had two children to raise and very little time for sex. The kids were one thing, but the explicit wishes Howard set forth in his will were quite another. As long as she never remarried, she would never have to subtract a check from her checking account. The stipulation, along with the extent of her husband's financial interests, combined to send her reeling. The concept seemed too bizarre to be true, so she contacted the man in charge of Howard's trust at the bank.

"It's strange," he agreed, "but these were Howard's wishes. There is more than enough money to sustain you for the rest of your life or until you remarry. If you do remarry, the money will revert to the children's trust for their education. As you know, Howard left a substantial trust fund for the children as well. Even with tuition rising at a high rate, they won't have to worry. When the time comes that you want to remarry, I suggest you make the decision to give the money to charity.

Through the years, she had dated many men, but the thought of remarriage never crossed her mind. Because of Howard's money, she had managed to remain completely independent and she liked things that way. To date she never had to worry about the funds being there, but of course, she watched every penny and didn't go on crazy spending sprees. Not that the thought hadn't crossed her mind, but she didn't want to tempt fate. She stayed in contact with the lawyer and knew exactly what the interest on the invested money came to and tried to never spend more than what she knew was in her account. To date, she never had to touch the principal, but lately it too began to dwindle with the downturn in the economy.

Of all her friends, she was the only one without a plan how to advertise for a man. Grace used the newspaper, Carol planned to use the bulletin board at the technical college where she taught, Marie would utilize her dance studio with lots of handsome young men and Anita would post at the athletic club where she worked as a nurse.

Ellen again stared at the computer screen containing the application she needed to fill out when the phone rang. Getting up from the computer chair, she went into the kitchen to answer the portable phone on the counter. As she did, she caught a glimpse of herself in the living room mirror. Am I out of my mind to be thinking about looking for a younger man? She asked the reflection in the mirror. The woman with white hair and computer glasses perched on her nose looked back and smiled, as though it was the silliest question anyone had ever asked. She wasn't pencil thin, like the women who were top models, but at the age of sixty-three, she did still have a great figure, at least that's what her friends told her when she complained about her weight.

Ellen almost regretted letting Suzie know about this crazy plan when she visited for the Fourth of July. "It's not. I'm sitting here trying to decide where to start, or should I say I'm trying to get up the courage to start? The idea of advertising online scares me half to death."

"Whew! I was afraid I called too late. Joe and I were talking and he gave me the most fabulous idea."

Ellen groaned. She knew all about the fabulous ideas her son-in-law, Joe, concocted. Usually they were so far out of the box they didn't work. "I'm almost afraid to ask what kind of an idea Joe has now."

"This time I don't think you have to be afraid of anything. The lumberjack competition is starting today and runs through the weekend. Joe thought it would be great to try your luck with one of the lumberjacks. They are all very strong and extremely handsome."

Ellen thought for a moment before answering. The thought of meeting one of the lumberjacks at the competition made her panties wet in anticipation. It had been a long time since anything like that happened. Maybe this would be a great idea. She'd been to the competition before and marveled at the men who were able to climb the trees and roll the logs with very little effort. To be truthful, she had fantasized about being with one of them more than once. This could prove to be quite an adventure. "It actually sounds like a lot of fun."

"Good, if you leave right after lunch, you can be here by tonight. Check your e-mail after you get packed and take a look at the ad I made up to post at the convention center downtown."

They talked for several minutes before hanging up and disconnecting the call. Ellen knew she'd have to do some quick packing to be ready to leave in the next couple of hours.

Scrutinizing her wardrobe, she couldn't decide exactly what she should take with her. She'd been to the lumberjack competition before and knew her suits and skirts would never do. At last, she decided on several pairs of jeans with tank tops and over shirts. As an after thought, she put in a denim skirt, matching jacket and a contrasting tee. The next week would be far from fancy and if she got lucky, there would be no need for half of the things she packed.

The clock read eleven when Ellen finished packing. Rather than fix lunch, she decided to stop along the way. She started to close down the computer, and then remembered she needed to check for Susie's e-mail.

The note she saw pop up was the one she was expecting from her daughter. I know this is new to you, but Joe and I think it's great. What do you think of this ad? By the way, don't forget to bring the D-O-L-L-S cell phone. When you return the copy, please put the number in.

Ellen smiled as she opened the attachment. ONE OF THE VERY EXCLUSIVE AND SEXY D-O-L-L-S DESIRES THE COMPANY OF A YOUNGER MAN FOR GREAT NIGHTS OF HOT SEX. CALL ELLEN AT__________ FOR MORE INFORMATION.

"Nights of hot sex?" Ellen repeated as she filled the cell phone number in the space Suzie had left open and hit the send button.

Knowing her daughter would probably post the ad before Ellen could get there; she turned on the cell phone. It isn't as though this thing will be ringing off the wall, but one never knows about these things. 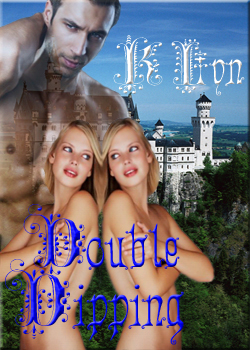