Farrin is starting life over after a tumultuous divorce. Moving to Miami to restart her career brings two men into her daily routine. Fate brings her together with Lyle. He runs an antique shop and design service, stretching into ‘staging’ homes and condos for sale, her special talent. His friend and largest client in the staging area is Van, a builder and developer.

Friendship came easy with Lyle, and their personal lives blended into a relaxed sexual relationship. His demeanor makes sex a pleasure, something long gone from her earlier days.

Van brings out her overwhelming sexual desire. He is the first to verbalize their tensions, laying the ground rules of no attachments, only fun.

Farrin never considered the possibility of enjoying two men sexually at the same time. They develop relationships that cross the three of them beyond business. What unfolds becomes a natural progression of lust and trust.

Farrin struggled to carry the coffee containers, the sandwich bag, and her purse as she hurried to the door of the deli. She was about to push it with her hip when it was opened from the outside, leaving her slightly off balance. She paused, resettled her purchases, and glanced to the man holding it open. Her nod of thanks was automatic, but she held his gaze momentarily. His smile let her know she was staring, and she felt a rush of heat from her neck to her cheeks.

“Ah, thanks,” was all she managed to utter as she hurried from the doorway. The few steps to her parked truck gave her time to wonder what it would be like to be touched by a man like him.

She knew it was silly, he was a total stranger, but his small kindness was appreciated. The fact he wasn’t hard to look at compounded her thoughts. She put her purchases on the hood of the vehicle while she unlocked the door and settled everything on the floor of the passenger side so it wouldn’t spill. Behind the wheel, she waited for the air conditioning to come on full blast. In that time, her kind stranger exited the store, a coffee container in his hand. She didn’t hold back the sigh that came with a second glimpse of him. Farrin decided he was probably around forty-ish. He had brown hair that was just starting to grey at the temples. He had to be at least six foot tall compared to her five foot, six inches. What struck her most was the glint in his green eyes as he smiled at her.

“Well,” she said aloud, “now if I could meet a man like him, I might consider sex again.” She shook her head, knowing it was best to leave that part of her life dormant for a bit longer. While she was settling into her new condo and job reasonably well, she wasn’t into meeting new men, yet. This stranger had stirred something deep within her she thought was long dead. As she drove to work, she found she was pressing her thighs together to ease the sudden ache developing in her crotch. It was a pleasant feeling, but she knew it came with complications. At this point in her life, she had enough to deal with. Nevertheless, it was good to know she could still turn a man’s head. “Get a grip girl,” she said, pulling into her appointed parking spot behind the shop. “Maybe tonight,” she mused, thinking about the new dildo in her nightstand, one she’d purchased but hadn’t used, yet. This stranger with wide shoulders, a flat belly, and a killer smile might be the catalyst.

They ate on his deck, enjoying the heated day and food. They talked of nothing and just relaxed. Farrin was wondering how to bring up the subject of sex with both men. It was still in her mind, the images still prevalent, even though she enjoyed having sex and making love with Van. It had become the forbidden act she wanted to explore.

Van was in the kitchen when Lyle came and sat beside her on the lounge chair. “He’s quite a guy, don’t you think?”

“Fucking? Of course I do, but he didn’t tell me. I have an innate sense for that kind of thing.”

“I have no right to be, Farrin. I learned a long time ago that with Van, you take what he offers but don’t ask for commitments. If you can agree to that, he’s an amazing man to be with.”

“Which is why you still date Nina.”

“Nina is my fall back. And I’m hers in different ways. That’s why we get along. We both serve a need the other has.”

Farrin struggled not to be blunt but decided that might just be easier. Get to the point and see what his reaction would be.

“Any needs I could service for you?” Farrin saw the look on Lyle’s face change, and she swore his eyes lit up like a kid on Christmas morning.

“Maybe you should be more precise before I assume.” He tried to tease, but she noted his cock hardening against his leg, his tight bikini bottoms becoming smaller. She reached a hand and stroked his cock through the cloth. She stared directly at Lyle, and he smiled.

“This is what you want, Van, isn’t it? The three of us together?”

“I didn’t know you realized I’d come back.”

“Of course I knew. I don’t go around grabbing men’s cocks unless there’s a purpose.”

“Everything. I want to experience the two of you every and any way we can.” She reluctantly left Lyle’s cock alone and stood. “Isn’t that what this has been building up to, or am I wrong?”

In unison, both men said, “You’re not wrong.” 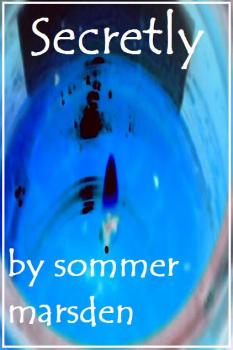