Two is an eliminator, a trained assassin. She has one mission—enter the portal, eliminate a rogue general, then activate her microchip to wipe her memory. But she knows a secret that would rock the foundations of the Institute’s training program. Armed with only a tiny dagger, and the truth of their future, she enlists the help of her partner, Four, to escape their fate.

“I hate to see you go, Two. I am very reluctant to send you on this mission, but you are our best operative, and this is a delicate situation.” He turned his attention to the office door when it opened and shut again. “Schmidt…you have the details of the mission?”

“Of course.” Schmidt settled himself into a chair, then gave her a nod. “Two.” She held her breath as he securitized her for a moment, a note of approval lighting his blue eyes. “She is an excellent choice for this exercise.”

Exercise? I am being forced into a deathtrap with a one-way ticket. She sighed.

At least Schmidt was a little easier to deal with. Although the two men had worked together for many years, he lacked the cruel edge that emanated from his partner.

“Sir, may I ask the objective of the mission and to which planet I will be sent?”

“Brevona, in the Alderan Galaxy. Your mission is highly classified and important to Earth’s survival. Do not share any of this with the other trainees.” He placed a tablet on the table and pushed it toward her. “Here are the details of your assignment.”

I’m not allowed to talk to the other girls. How on Earth would I share any of the details? Loser…

Two swiped her finger across the screen scanning through what were mainly photos. No names, no written details. Several of the pictures were of the planet, Brevona, another of a castle and the royal family, then one of a grossly overweight man with greasy hair, wearing a uniform. “The target?”

Schultz walked behind her and rested his hands on the back of her chair to peer over her shoulder, his face uncomfortably close to hers, his breath on her neck.

“That is General Nimera Xalo. He has led his army to revolt against the king and queen and has captured the royal family. They will be executed this week if the maniac is not stopped. WLO has informed us that Nimera is hosting a large party to celebrate his ascension to the throne. Many dignitaries have been invited, including several from Earth. You will infiltrate the celebration and seduce the general.” Schultz lightly caressed her jaw, then withdrew his hand. “Beautiful women are his weakness, and you are the most exquisite and elegant of all my girls.”

I suspect women are your weakness, too, the way you touch me. She wrinkled her nose in disgust at both the idea of seducing the general and the touch of Schultz’s hand.

She shook the revulsion from her body to focus on her assignment. “Sir, isn’t the portal untested on humans? Why not allow me to travel with the Earth delegation to ensure the elimination of my target?”

Schmidt leaned forward and patted her leg. “You have nothing to fear. The portal is stable, and we can promise you that you will reach your point of destination. A return trip is another matter entirely.” 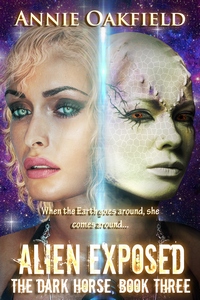 The Life to Freedom (LoveXtreme)
Dixie Lynn Dwyer
In Shelf
$5.99
Tweets by
sirenbookstrand