Keisha never dreamed that being an accountant at a private detective agency would lead her into the adventure of a lifetime. But when she's needed to help her bosses do a buy-back of stolen jewelry in Key West during Fantasy Fest, she discovers that there's more passion in her soul than she had ever thought possible. 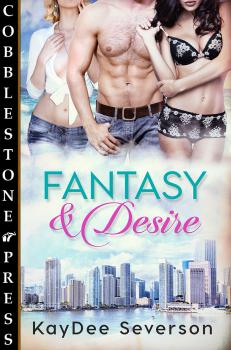 I had just finished my last rush-hour lunchtime shift for the week at the Bayview Bar and Grille. It was a complete rip-off of the television series Baywatch, where a bunch of beautiful young women wear very tight, very sexy, very revealing red one-piece swimsuits while saving people from drowning. At the Bayview Bar and Grille, we wear the one-piece swimsuits, but we don’t save lives—we dish out hamburgers, chicken wings, and fries, while trying to not get felt up in the process. We also hoped to get really good tips, though that was a hit and miss process. Some of the customers paid and some didn’t. But all of them ogled. Every damned one of them. Both the men and women. Still, only some of them gave proper tips. However you added up the pluses and minuses, I supposed I made more than most, and the IRS only knew a little of what cash tips I made.

“What’s up?” I asked Julie, my best friend, and a fellow server at Bayview.

Her family was worth a fortune, so the only reason she was working at Bayview was because she truly had nothing better to do until she figured out what she wanted to do with her life. Also, I think she was kind of an exhibitionist at heart. Our uniforms didn’t leave a lot to the imagination, which pretty much explained about eighty percent of the reason the restaurant was so popular. We were both attending the same community college while trying to decide what the hell life was all about. At six credits a semester, I was on the slow-track to academic stardom. But life had tossed too many responsibilities onto my shoulders for me to take any more credits per quarter than that.

“Nick and I are going to South Beach. I’ve just bought a hot new bikini and I want to show it to him. Want to come along?” Julie asked.

I smiled. “Thanks, but I’ll let you two lovebirds have some time alone.” I leaned close and whispered into her ear. “Besides, didn’t Nick jump your bones the instant he saw you in the last new bikini you bought?”

Julie’s dark eyes were alight with mischief as she nodded. She whispered back, “Why do you think I keep buying new bikinis?”

Nick said, “Hey, enough with the whispers. You’re going to make me feel like I’m not wanted.”

“Don’t worry about that. You’ve got all of Julie’s heart and soul.” I dipped my voice conspiratorially “And you’ll probably have even more than just her heart and soul pretty soon.” The three of us shared a laugh. “Besides, I’ve got to get to work and make some money.”

“I work a few hours a week as a secretary and bookkeeper at the Oceanside Detective Agency,” I replied. “That doesn’t make me a private detective. All I do is work for detectives.”

“Whatever.” Julie kissed me on the cheek and walked away, holding hands with Nick.

So I was feeling pretty happy—if not for myself, then at least for Julie and Nick. They were gloriously in love with each other, and seemed to prove it to each other in a physical way with a frequency I was entirely envious of.

I paused when I neared my Vespa and saw Billy.

Every girl makes one enormous mistake in her life. Okay, some make more than one, but all of us make at least one. Billy was mine. He said a lot of things, and for longer than I cared to admit, I believed everything he said. It took several years to finally figure out that what Julie and Nick had been telling me all along was the truth: Billy was a liar. He would rather lie than tell the truth, and he couldn’t keep a job because he couldn’t get along with people. But most importantly, Billy loved himself completely—so completely there wasn’t enough love in him for anyone else, and that was why he didn’t have friends, only buddies.

At five-foot-six, Billy was six inches taller than me. Metaphorically, I saw myself as being much bigger than he—but that doesn’t really do a girl a whole lot of good in a fistfight.

I glared at him. “What are you doing here? We’ve broken up, remember?”

“We had a disagreement,” he shot back. “That don’t mean we broke up.”

I made a point of keeping my tone calm and reasonable. “Billy, you and I are history. I’m never going out with you again. Not ever. Now please, stop stalking me.”

“You fucking cunt, don’t give me pushback!”

He’d already called me that name before, so it didn’t get him as much of a reaction as he wanted. I just smirked at him.

His right hand shot out so fast I didn’t have time to react. His palm connected with the left side of my face, and before I knew it I was sprawled out on the sidewalk near my Vespa.

He stepped forward and glared down at me. “Next time, I’ll knock your teeth down your goddamned throat.” Then he spit on me.

My ears were ringing as I got to my feet. It was the first time Billy had raised a hand to me, and the sense of violation was profound. Weird, hideous, violent thoughts went through my mind, but I promised myself I wouldn’t sink to Billy’s level. He was an awful human being, and I wasn’t. If I behaved like he did, I would be no better than he was.

At least, that was what I tried to tell myself.

I put on sunglasses and got on the old Vespa. I smelled gasoline, and saw the concrete beneath me was wet. Billy had cut the rubber hose leading from the gas tank to the engine. My God, how had I ever loved a man who’d do something like that to me?

I hurried through the parking lot, hoping to catch Julie so she could give me a ride to work. I found her a minute later.

“Problem with your scooter?”

“Out of gas.” I felt guilty about lying, but I didn’t want to explain the whole Billy story to her because I knew she’d give me an I-told-you-so response.

On cue, Nick roared up, pulling his brand new Audi sportster to the curb, nearly locking up the tires as he came to a stop. His car was small, fast, and sexy…and expensive. He came from a family with serious money. The only money problem his family had was figuring out how to spend it fast enough.

“Hi, honey!” Julie’s adoration for Nick was out there for all the world to see.

She opened the passenger door and leaned inside to kiss him. Their kiss was as soulful as any girl could ever hope for. It probably included a lot of tongue action, but with her legs being outside the tiny car and her upper body inside, I couldn’t actually see. I was glad for Julie, and though it wasn’t an emotion a girl should be proud of, I was envious as hell of her. I hadn’t been kissed since I told Billy to go to hell. I told myself I wasn’t missing out on anything, but I also knew I was lying to myself.

Since my presence didn’t seem necessary, I said, “Julie, why don’t you and Nick just go on without me? I can walk to work. It’s not that far.”

“Forget that! We’ll get you to work in no time at all.”

“Nick’s car is a two-seater. There are three of us.”

“So what? You can sit on my lap.” She gave me a teasing grin. “As short as you are, that shouldn’t be a problem.”

I thought about the offer for a minute. I knew Julie and Nick wanted to be alone together, but equally true was that the sooner I got to the Oceanside Detective Agency office, the sooner I clocked in and started making money. Money—or, more precisely, the lack of money—was never far from my thoughts. It was the wolf that never left my doorstep. And every time I looked at that demon, its lips were curled into a snarl, and I could see its fangs. Those fangs were long and sharp. So far I hadn’t felt them sink into my flesh, but the possibility was always there. One misstep and I’d feel them. That was a wolf that was always hungry. Always.

“Okay. But you should sit on my lap. If I’m going to be a burden, at least I should be on the bottom.”

I crawled into the low-slung car. Though I’d seen it several times, I’d never ridden in it, and I was shocked at how little room there was. When Julie got in, she had to squirm onto my lap, and once there, had to bend to the side because there was so little headroom.

When I looked over at Nick, he smiled at me—but it was a wan smile, not the open, friendly smile he usually gave me. He clearly hadn’t counted on me intruding on his time with Julie.

“We’ve got to take Keisha to her job. It’s on the beach in one of those high-rises.”

“I know where it is, but I thought we were going for a drive,” Nick replied, censure a subtle but noticeable undercurrent in his tone.

“We are going for a drive.”

Nick looked at her for a moment, and there was a sudden tension in the air that made me feel uncomfortable. After several seconds of silence, Nick spoke with what seemed like painful sincerity. “I mean one of our special drives.”

I couldn’t help but notice color come to Julie’s cheeks at his reply. There was hidden meaning to his words, but I didn’t know what it was.