When photographer Lake Silva helps her best friend trawl online dating sites in her search for love, she is appalled by some of the pictures men upload. Totally unflattering!

So Lake takes it upon herself to do something about it with a brainstorm for a new business venture—professional online dating photos. Slick, appealing, and sizzling hot...with Lake behind the camera lens! What she doesn’t count on is meeting one male client who stirs up more than just business sense in her.

Hunter Dex is not Lake’s usual customer. He lives in a palatial abode, and he has ocean-blue eyes and a tanned, muscular body.

Despite a photography exhibition of nudes also keeping Lake busy, she can’t help having dirty fantasies about Hunter. But such a gorgeous, rich playboy like him could never be seriously interested in a feisty tomboy like her...could he?

4 STARS: "On-line dating. Dirty fantasies. Voyeur tendencies. Naughty photographs. Sexy subjects. What an excellent composition for an afternoon of total indulgence and those are the exact elements you will find in FULL EXPOSURE. In an attempt to help her friend find "Mr. Right," professional photographer Lake Silva scours through the truly horrible photos in the on-line dating sites. As her shock at the awful photos wanes, a genius idea for a new business is born...professional online dating photos! Who wouldn't want a little help at putting their best foot forward when trying to catch the eye of their potential mate? Lake is no stranger to provocative and sexy photo shoots - producing works of art that tease the senses, making her the perfect photographer to control the camera. Putting her business plan in motion, she sets out to better the life of one mysterious and flirtatious single man needing help in the photo department. What she expects is far different than the sexy and wealthy playboy she discovers and she certainly doesn't expect to be fantasizing about the man. Hunter Dex doesn't have to work very hard to lure her in with his piercing blue eyes and smooth, tanned skin stretched taught over sinewy muscle. He is the perfect subject and is now the object of all her naughty fantasies; she can't seem to get him out of her thoughts. As Lake and Hunter's paths continue to cross, their business relationship decidedly takes a more personal turn and his innocent glances turn to penetrating stares that twinkle with mischief and desire. I love erotic stories that draw out the anticipation of that first steamy encounter and FULL EXPOSURE does just that...making you crazy with want and desire. Hunter Dex is the perfect mix of sweet and sexy, naughty and nice. Who would complain about working if all your subjects were as hot and alluring as the elusive Hunter Dex? Call me a work-a-holic because the only time I would be putting down the camera would be to partake in the pleasures Mr. Dex happened to be offering! FULL EXPOSURE is bound to force your libido into overtime too!" --  I ♥ Bookie Nookie, The Romance Reviews

‘Is that what made you turn to online dating?’ Lake pressed. ‘Women throwing themselves at you for all the wrong reasons?’

‘Throwing themselves at me?’ Hunter’s eyes lit up teasingly. He chuckled. ‘Why would you ever think that?’

Lake squirmed in her seat, unsure how to answer. She didn’t want to spell out the fact of just how gorgeous he was, that he was an uber-handsome wolf in sheep’s clothing. Finally, she simply just shrugged.

For once, though, Hunter let her off the hook he was dangling her on. And now there was seriousness in his eyes, which sent a shiver through her. ‘I’ve played the field, but now I feel it’s time—to find The One. And I didn’t want to put off any women who might feel intimidated to approach me in real life. The cyber world seemed the perfect way to put everyone on an equal footing.’ Then he slapped his track-pant-clad knee and, just as quickly, the mood changed. Lightened. ‘So, got enough? Should we get started on the photos? Take a few test shots?’

Lake nodded, setting her clipboard aside. It seemed that he was calling the shots at this meeting but, for once, she didn’t mind. The probing was leaving her even more hot and bothered. She couldn’t wait to get behind the safe vantage point of her camera lens. ‘Sure.’

‘Want me to remove this, too?’ Thank God. The beanie. She hadn’t known how to bring it up.

Swiftly, Hunter stood up to his full six-foot-three frame, which seemed a little extreme just for removing headgear. Then, as quick as lightning, his arm went up and, oh, God, he was tugging off the holey T-shirt, pulling it over his beanie-clad head, exposing luscious, tanned, bare-chested skin underneath that you could sink your teeth into, and a well-defined six-pack which would have done Michelangelo’s David  proud. Try as she might, Lake couldn’t drag her eyes away.

As a seeming afterthought, Hunter then pulled the navy beanie off his head, throwing it casually to the floor, revealing a crop of blond hair underneath, each strand upright like wheat stalks blowing in the breeze. His eyes remained determinedly pinned on hers.

Lake was rooted to the spot. Riveted. Her breathing shallow.

Then she felt the hand caress her cheek and heard herself suck in her breath deeply. Each finger felt like it set off mini-fireworks on her skin. And then, just as quickly, the warmth melted away, the fingers prised off, and they came back into view, waving about in front of her face.

‘Got it,’ Hunter said, an offending golden strand of dog fur being held up, coming into view. It must have been decorating her cheek. Darn Scraps. Lake felt the disappointment plunge through her, like gulping down a glass of icy water.

Brushing off his hands, Hunter looked at her with a mischievous gleam in his eye, an aching meter’s length away from her now. ‘Well, I guess it would be unmannerly of me not to bathe before having my photograph taken…’

Then he promptly swivelled around and sprinted forward, his arms outstretched and his head tucked in, and dove into the pool’s glittering depths, still clad in his track pants. 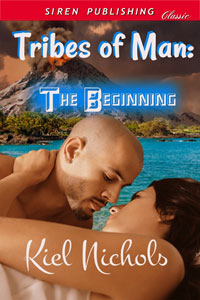 Tribes of Man: The Beginning (MF)
Kiel Nichols
In Shelf
$5.50